Leda Cedar says she is fed up with waiting to receive the much needed $500 COVID-19 recovery benefit that Premier John Horgan and the NDP promised during last fall’s election campaign.

While more than $1 billion has already been sent to 2.3 million people, a large number of those likely eligible for the payments have yet to apply and applications from many people, like Cedar, remain under review.

The 68-year-old retired social worker who lives in Penticton said she applied in December, the day after applications opened, but hasn’t received anything beyond the initial confirmation that the government got her application.

“Since Horgan announced this pathetic ‘rollout’ that seems more like a trickle, those of us desperate to get this promised hand up are still waiting in limbo, every damn day!” Cedar wrote in an email, adding the delay has contributed to her distrust of Horgan’s government.

“If there were any missing or confusing links, you'd have thought they'd have called or emailed me the actions to take to address it,” she said. “They've got all my government papers and permissions, so I fail to comprehend this.”

Cedar said the money would make a big difference. “I could get my dental work done and it would just give me a little bit of a cushion in the bank.”

A statement from the Finance Ministry said the COVID-19 recovery benefit is the largest payment program in B.C.’s history and that it encourages people who are waiting to submit additional documents to support their applications.

“We appreciate everyone’s patience as we work as quickly as possible to process the remaining applications,” it said. “Staff are assisting people who need help through the application process and following up where additional information is needed.”

During the election campaign, Premier John Horgan said he wanted to get the recovery benefits out to people by Christmas.

The ministry said that by March 8 the government had completed 400,000 reviews of applications that required additional scrutiny and had another 160,000 applications waiting to be reviewed.

The Finance Ministry statement said it’s moved “as quickly as possible to get payments out to people throughout the province.”

Still, many eligible people are missing out. According to the government, the recovery benefit has flowed to 2.3 million people, but there are an estimated 3.7 million who are eligible.

That means roughly a third of the people eligible to receive the money either haven’t received payment or haven’t applied. The deadline for applications is June 30.

Shirley Bond, the interim BC Liberal leader, said the slow delivery of the recovery benefit is part of a pattern where the NDP government makes big promises, then fails to deliver.

“We’ve seen an ongoing series of challenges with programs that this government, frankly, has botched,” Bond said. 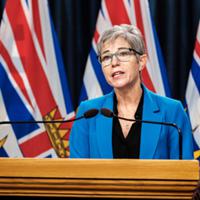 On Thursday in the legislature she said she was “very happy” the recovery benefit had gone to 2.3 million people.

As for Cedar, she said she’d just like to receive the payment she’s been waiting for since December. And she said it shouldn’t be hard to identify those who are eligible for the full benefit.

“They do know who earned less than the limit,” she said, adding every senior like her dependent on government programs would be under the income threshold.

“‘Enough already,’ is how I feel about this.”