The Vancouver Police Department is promising an internal review of the violent arrests of four Indigenous people, partially caught on video, at the downtown Vancouver headquarters of the Bank of Montreal on Friday.

But Harsha Walia of the BC Civil Liberties Association says that review is not truly independent. The investigation will be conducted internally, and monitored by the Office of the Police Complaint Commissioner, which is headed by a former Royal Canadian Mounted Police officer.

“Despite the immense amount of power that police hold, there is no fully civilian, truly independent, enforceable police accountability mechanism in this country,” said Walia.

“Police are a colonial force, and the only accountability is to disarm them and reduce the scale and scope of their power especially in relationship to Indigenous peoples.”

The arrests took place on the third day of protests by the Braided Warriors, a group of mostly First Nations people under 25. The protests occurred inside and outside the lobby of an insurance company associated with the Trans Mountain Pipeline expansion project.

The Bank of Montreal’s Burrard Street building is home to AIG Insurance, one of 11 insurance companies insuring the project and the target of the protest.

It’s also home to the BMO location that called the Vancouver police over a Heiltsuk Nation grandfather and granddaughter who tried to open a bank account in 2019.

“The fact that private property owners can call the police as their enforcers in order to silence and criminalize public dissent should concern us all. And this is even more outrageous when private companies work hand-in-hand with police to repress Indigenous affirmation of Rights and Title,” Walia wrote in an email to The Tyee.

“Indigenous peoples continuously bear the brunt of policing, and disproportionately fatal police violence, in this country — whether it’s on private or public space and all of which is Indigenous lands.”

Like the protest at the Bank of Montreal building, Braided Warriors hung red dresses — symbolizing murdered and missing Indigenous women and girls — at these locations, stood in front of the main entrance doors and hung banners that read “Indigenous Youth Say No Consent,” while protesters sang, drummed and conducted ceremonies inside the building.

While the Vancouver Police Department was present at all three protests, no arrests were made until Friday.

Media relations officer Steve Addison told The Tyee via email on Thursday that the department respects the right to peaceful protest.

But Braided Warriors members allege that on Friday as many as 70 officers moved in to arrest them. According to the police department, the protest at that point was no longer peaceful.

“During Friday’s protest, the demonstrators set up a tent and used their bodies to barricade the front doors of a building on Burrard Street, refusing to let anyone enter or exit. VPD officers attempted to negotiate with the protesters to gain compliance and have them move outside, however they refused to engage,” Addison told The Tyee in an emailed statement Monday.

Addison said that additional officers were called in from across the city to help “regain control of the situation” after protesters refused to leave.

The Braided Warriors say that after at least two hours of protesting with a half-dozen police watching nearby, dozens more police officers arrived using an escalator from the Bentall Centre beneath the BMO building. 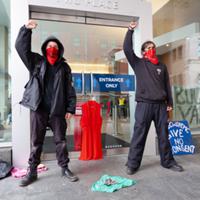 “They asked us to leave. Some of us decided to stay, and some of us were actually leaving. One of the Indigenous youth who was brutalized was making an attempt to leave,” said Corvin Mack, 22, one of four people arrested at the protest.

“She stated out loud that she was taking this time to leave, she was just picking up her things, and then she was violently arrested.”

Video footage taken by Braided Warriors shows police throwing one person to the ground and pulling another by their hair.

Addison told The Tyee via email that the department is aware of the video and a review of police practices is under way.

“All police incidents are subject to multiple layers of oversight including civilian police oversight from the Office of the Police Complaint Commissioner. We have shared this video with the VPD’s Professional Standards Section, and they have notified the OPCC,” he wrote.