It was just a few weeks after COVID-19 sent its first patients to B.C. hospitals last March, and Kieran could tell his colleague was nervous.

The two porters were making their way through Vancouver General Hospital to the morgue, transporting the body of a patient who had died of the virus just hours before.

As a porter for more than two years, Kieran is used to moving about 15 patients per day, taking them to their wards or whisking them off for tests, and taking samples to the hospital lab for analysis.

On the way to the morgue he could tell his co-worker, who is married with a young son, was on edge as they moved through the hospital together.

“It’s scary work, solemn work,” said Kieran. “He was really nervous that trip, I could tell by his body language and tone of voice.”

Despite moving at least a few COVID-19 patients each per week, as well as other patients who could have been exposed, Kieran and his around 120 porter colleagues have no idea when they will be vaccinated, as nurses and doctors working with the same patients get their shots.

And he says poor communication and little support from hospital administration has porters and other non-medical staff like cleaners, laundry and food service workers feeling left behind in the province’s vaccination effort.

“We’ve been left in the dark about things. This confusion has created fear,” said Kieran, whose name has been changed to protect his job.

In the last few months, Kieran says he heard from fellow porters that some office-based staff who don’t work directly with patients had already been vaccinated at VGH. He saw another social worker post on Facebook that she had received it as well.

“The mood amongst porters is a bit demoralized, because we don’t know when we’re going to get our vaccine and we feel like second-class citizens.”

Between preparing patients for transport and moving them to their destination, B.C.'s more than 900 porters spend about 20 minutes with each patient they move, standing behind their heads to push their beds or wheelchairs.

Kieran and his colleagues use N95 masks and visors when transporting COVID-19 patients and those who are intubated and can’t wear a mask.

But in urgent situations, porters can feel pressured to do the work without proper PPE.

In late December, he says, a doctor told him there wasn’t enough time to get his N95 and visor before he moved a positive patient from the emergency department to a COVID-19 ward.

Kieran recalls her saying he didn’t need one since the patient was wearing a mask. He refused and went to get his mask and visor, but it left him shaken.

Porters are not included in the current first phase of vaccinations in B.C., which prioritizes residents and staff in long-term care and assisted living, as well as health-care providers like nurses, doctors and respiratory therapists in emergency departments and COVID-19 care units.

B.C. is expected to move into the second phase, which includes all workers in health-care settings, by the end of February.

In late January, without knowing if he was eligible for the vaccine, Kieran dropped by at the end of a vaccine clinic at VGH to see if any doses were available.

A porter and friend at Royal Columbian Hospital in New Westminister had already gotten his shot, and Kieran hadn’t heard anything from the hospital, even when he asked supervisors.

As soon as he told staff at the vaccination clinic he was a porter, they said he wasn’t eligible for even an extra dose laying around.

The Tyee reached out to Vancouver Coastal Health on Feb. 10 to inquire about the situation at VGH and the status of porter vaccinations at all hospitals in the health region. The same request was also sent to the other four regional health authorities.

Four did not reply, but a spokesperson for Fraser Health said the Health Ministry would be responding on Thursday. The Tyee followed up with the ministry but did not hear back by publication.

On Feb. 12, provincial health officer Dr. Bonnie Henry said there are many reasons some workers in the health-care sector may have been vaccinated while others have not.

“We know some nurse managers, some of the people who have been immunized, are people who work in outbreak management in long-term care homes,” she said in response to a Tyee question.

“We have other things in place that protect other workers including cleaners, people who work in food services, security, all of the essential workers that we have in our hospital system,” said Henry.

“Yes, it is important, and they are in the next phase of their immunization program, but with the limited vaccines, we are focusing on people who have direct [patient] contact.”

The Hospital Employees' Union, which represents the porters at VGH and most others across the province, said the union supports the prioritization framework in place, but it needs to be applied uniformly across health authorities.

“The question is how is it applied on the ground, and I think it’s a little bit inconsistent,” said Mike Old, the HEU’s interim secretary-business manager.

Porters at St. Paul’s Hospital, run by Providence Health in partnership with VCH, have received their first shots, Old said, and in January, Global reported that at least one porter at Royal Columbian Hospital had been vaccinated with an extra dose.

Old hopes these issues will be resolved once phase two of the province’s vaccination plan begins and all health-care staff are eligible. The province hopes that will start in March.

Communication from health authorities needs to be strong in the meantime, he said. “The more information that’s out there, the better.”

“Of course our members want access to every tool possible to fight this virus,” said Old. “It’s been a very long 10 months, our workers are exhausted.” 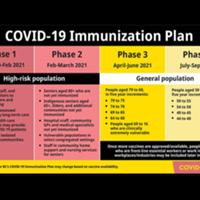 BC’s New Vaccine Rollout Is Based Largely on Age

Kieran says he and his colleagues don’t have an issue with the priority list that has been established, but are concerned they could transmit the virus inside the hospital if they don’t get the shot soon.

There is promising early evidence to suggest the Pfizer-BioNTech vaccine may reduce transmission of the virus, as well as serious illness.

But Kieran is also worried his colleagues, many of whom are immigrants and send money to family abroad, could contract COVID-19 and face the impossible choice between working while ill and losing out on income to support their families.

As of Thursday, the only thing Kieran had heard was a rumour that vaccines could begin for porters at the end of next week.

“We want to feel respected and know we’ll have it soon,” he said. “It feels like we’ve been left to our own devices.”