The province’s largest vaccination effort in history is projected to vaccinate all 4.3 million eligible British Columbians by the end of September, health officials announced today.

The province is prepared to deliver 8.6 million doses of the Pfizer-BioNTech and Moderna vaccines — both of which require two doses — to all adults who want one at a rate of up to 500,000 per week as vaccine supply increases.

“By the end of September, everyone who wants a vaccination will have one,” said Premier John Horgan.

The province has changed early plans to continue prioritizing specific at-risk groups as is being done in other provinces. Instead, the vaccine will be administered largely based on age in B.C.’s four-phase strategy.

“Our immunization plan is based on evidence and data,” said provincial health officer Dr. Bonnie Henry. “And we know the single greatest risk factor for serious illness and death from COVID-19 is increasing age.”

Initially the province said frontline workers such as those in law enforcement, grocery stores and essential businesses and teachers and emergency responders could be prioritized in its plans.

But research from B.C. and the rest of Canada indicates that risk of serious illness and death due to COVID-19 increases “almost exponentially” with age, Henry noted.

Those over 80 are almost twice as likely to die from COVID-19 as those in their late 60s, who are five times more likely than people under 45.

Even the other chronic conditions proven to increase the risk of hospitalization and death, such as serious asthma, heart disease and diabetes, are heavily correlated with age, Henry said.

“Going on an age-based model captures the majority of people with underlying risk factors first,” she said.

“This is going to be, and needs to be, an all-B.C. effort to make sure we can protect those most vulnerable and all of us in our communities.”

More than 100,000 people have been vaccinated so far, and the phase will wrap up by March, Henry said.

Under Phase 2, starting in March, 172 communities will see stadiums, high school gyms and public plazas turned into mass immunization centres. Mobile vaccination clinics and house-call teams will also be available for smaller communities and people who can’t make it to a vaccination centre.

More than 240,000 seniors over 80 living in the community will be immunized, as well as Indigenous seniors over 65, hospital staff and community practitioners and homeless or vulnerable populations living in settings like shelters and group homes.

At the same time, vaccination pre-registrations will start for the general population by phone and online, opening two to four weeks before each age group is eligible on a rolling basis.

In Phase 3 starting in April, about 980,000 seniors in the community will be immunized. The plan is to start with people 75 to 79 and move through the population in five-year increments until everyone over 60 is vaccinated.

B.C.’s vaccination lead Dr. Penny Ballem said immunocompromised adults and teens over 16 will get the vaccine if it’s deemed medically necessary during this phase, as well as organ transplant recipients and those with other clinical vulnerabilities.

And the final phase starting in July will see about three million people aged 18 to 59 vaccinated in descending age order.

The plan is based on the increasing availability of the Pfizer and Moderna vaccines, as well as the anticipated approval of additional vaccines on order.

Vaccine shortages have already delayed vaccinations in B.C. and across Canada.

The province expects more than 800,000 doses to arrive in B.C. before the end of March, 2.6 million from April to June and six million by the end of September.

Planning also assumes 100-per-cent uptake in the population, which surveys indicate will not be the case.

Henry hopes around 70 per cent of those eligible will be vaccinated to build community immunity.

“This can be reached if the large majority of people in B.C. choose to be immunized,” she said. 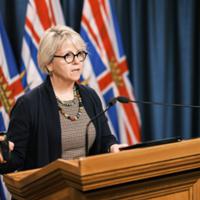 400,000 British Columbians to Get COVID-19 Vaccine in First Three Months

Officials say the timeline could shift if the AstraZeneca vaccine is approved and available in the province, or if vaccines need to be rerouted to deal with community outbreaks, clusters or high-risk workplaces.

Ballem said the baseline estimates “allows us to know how to schedule human resources, supply chains for vaccines and other supplies that are necessary.”

Horgan said more delays are possible if vaccine production is slower than expected.

But the plan is a good starting point and can be adapted as vaccine supplies increase or acute needs emerge in communities, he said.

Henry and Health Minister Adrian Dix urged people to continue washing their hands, staying home when sick and masking up in public areas.

It will be a long time until any sense of normalcy can return, and this is a critical time to protect the most vulnerable before they are immunized, they said.

“What’s really important for success and us getting through these next few months is continuing to take the precautions that we know work,” said Henry.