Health-care providers’ lack of knowledge about issues faced by Indigenous and other racialized people, especially those who are gender and sexually diverse, is compromising their health, a new B.C. report has found.

Its report found a lack of knowledge resulted in inferior care and led people to avoid seeking help.

The researchers found people reported their identities were often discounted, ignored or treated as illnesses by health-care professionals.

And the gaps in compassionate and inclusive care are particularly harmful in rural and remote communities where options for health services and providers are limited, the report found.

“Some of the people most likely to need help are the least likely to get it,” said the collaborative’s Lydia Luk, who co-led the study titled “Believe Me.”

“The number one barrier to care was a lack of health-care providers knowledgeable in the diverse intersections of our issues.”

The findings echo the “widespread and insidious” health-care racism found by an independent investigation into anti-Indigenous racism in B.C. health care.

And the report said the situation is more dire for people also dealing with discrimination based on other factors, from gender to poverty to colonialism.

“The negative impact of this stigma is further amplified for many 2SQTIBMPOC as a result of broader socioeconomic concerns such as historic and ongoing colonialism, racism; intergenerational and multigenerational experiences of trauma and genocide; poverty and classism; and, sexism and misogyny, amongst many others,” the report says.

The study’s authors spoke to over 100 individuals in focus groups around the province, as well as racialized gender and sexually diverse health-care providers, about their experiences with racism, homophobia and transphobia in the health system.

Dr. Nel Wieman, deputy medical health officer for the First Nations Health Authority, said “the sheer unawareness of many health-care professionals to the issues of many racially and sexually-diverse populations” came up again and again.

Many respondents in rural areas said they were forced to choose between care from someone with little understanding of their concerns or joining a long waitlist for perhaps more compassionate care in an urban centre.

They also felt like they couldn’t raise issues around their race, gender identity or sexuality for fear of being judged or denied services.

When care was provided, a large portion of participants said they had little to no say in their own health decisions.

“Patients seeking care for a specific health issue report their health-care provider often bringing up concerns and questions unrelated to the issue they were seeking support for,” read the report.

These knowledge gaps and biases can have detrimental impacts on individuals' health, like they did for April Sumter-Freitag.

When Sumter, who is Black and of Mi’Kmaq, Cherokee and Scottish ancestry, began to have major eye problems, they were told by doctors it was an allergic reaction.

But some mornings they woke up and it took an hour for their eyes, choked under layers of discharge, to open. Their eyes watered and wept constantly and were inflamed during the day. They began to see halos and rainbows around every source of light as their vision deteriorated.

Doctors minimized their pain, and said it was good that their eyelids were still pink, which they said meant Sumter was healthy.

“They didn’t know what they were looking for, didn’t know my eyelids shouldn’t be pink,” said Sumter, who participated in the study.

If health-care providers had been trained to look for eye conditions on Black skin, Sumter said, they would have known that “me having pink eyelids would mean they were rubbed raw.”

“I was going blind and it was scary.”

Sumter had to advocate strongly for themself and eventually received an experimental treatment that stabilized their condition after already losing more than 50 per cent of their vision.

But they said their fight for care would not have been possible for someone who was visibly queer or didn’t have a job or enough energy to advocate for themselves.

“Anti-Black racism almost cost me my vision,” said Sumter, who is queer and non-binary. “And the amount of privilege I have accumulated saved my vision.”

The report lays out a number of recommendations to address racism, homophobia and transphobia in the health-care system.

Solutions as simple as prioritizing people’s chosen names and pronouns in correspondence can make a difference, it found.

But the report also wants to see more systemic changes like detailed data collected on race and gender in population studies, and provincial coverage for gender-affirming health services like voice therapy and hair removal. 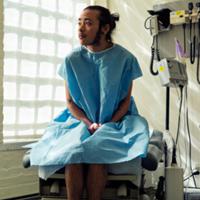 It also calls for increasing the number of health-care providers who are racialized and gender or sexually diverse and educating other providers on treating diverse individuals.

Sumter thinks that could have saved their vision.

“I really feel this could have been avoided by people educated about how to treat Black people,” they said. “People can’t recognize these conditions on a Black body.”

In the midst of a pandemic and a public reckoning with systemic racism, Wieman said it has never been more important to address the intersections of identities that leave people increasingly vulnerable to poor care or likely to avoid care entirely.

“This is a really critical time in history, and we have momentum on our side,” said Weiman. “And it’s hard for us to talk about experiences, and it’s hard to hear about these experiences, but we are never going to move forward if we can’t have these difficult conversations.”