A Vancouver home builder isn’t waiting for government regulations to change to demonstrate his idea for quickly offering emergency housing to homeless people.

Bryn Davidson is putting the finishing touches on a prototype of what he calls a “tiny townhome,” a basic shed-like structure that Davidson has suggested could be an alternative for people who are homeless and live in a tent or without any shelter at all.

“We’ve listened to people just talk, talk, talk for ages, and it seems like very little ever happens,” said Davidson, the owner of Lanefab Design/Build. “The ability to just jump in and do something is appealing.”

Once the 100-square-foot prototype is finished Davidson hopes to put it up at a yet-to-be-determined location to give people a sense of how the idea could work.

The prototype will meet the City of Vancouver’s current zoning rules for a shed, but Davidson said a bathroom and kitchen module could be added to the tiny dwelling. The basic unit Davidson is building costs around $15,000.

Davidson posted a video tour of the under-construction tiny townhome on Twitter:

Davidson first suggested his idea earlier this fall as the city was grappling with what to do about rising homelessness and a growing tent city at Strathcona Park.

Out of several options — including trying out a tiny home village — city councillors opted to prioritize buying or leasing more hotels rooms and apartment buildings to provide housing for people who are homeless.

Another city council motion from Coun. Pete Fry asked city staff to look at what zoning and building code regulations would have to change to allow tiny homes.

But Davidson doesn’t expect to see any actual changes to the building code or zoning until summer 2021 at the earliest.

“I feel like something needs to be done,” he said. “The city was analyzing all these options from the city’s point of view. The advantage of [the tiny homes] strategy is it’s something the private sector and private individuals can just jump in and contribute to.”

Tiny home villages have sprung up in many North American cities, and range from prefabricated structures with power to very basic dwellings with no heat or electricity.

City staff have expressed concerns about designs for tiny homes that don’t include heat and electricity or a private bathroom. Current zoning would also require dwellings to include a fire suppression system. 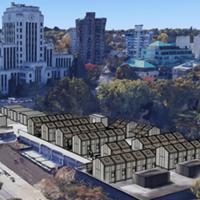 Tiny Homes for Homeless Next to Vancouver City Hall? The Option Has Official Interest

But Davidson and other tiny home proponents say the idea is to provide a temporary solution that provides better shelter and security than a tent. People who store their belongings in tents often have their stuff stolen, and when tents leak in cold, wet weather it’s difficult or impossible to dry out bedding and clothing.

The prototype is insulated but would need to be hooked up to electricity to allow heat and ventilation. Davidson said he’s currently talking with the city, church groups and non-profits about a location for the prototype.

Davidson envisions small “villages” of 10 to 20 tiny townhomes across Vancouver, placed in vacant lots that are awaiting development, for instance. When the prototype is finished, Davidson plans to try sleeping inside with his family to see what it’s like.

“I think that there should be one of these little villages in every neighbourhood in the city,” Davidson said. “It’s not just something where somebody in Dunbar thinks, ‘Oh, that’s just a Downtown Eastside problem.’ I’d like to see every neighbourhood contributing.”