A church that has provided services to homeless and precariously housed people in the Downtown Eastside for over a century is preparing to redevelop the property it owns at 320 E. Hastings Street.

First United has been trying to redevelop the building for the past 12 years, but Lansdowne said this time, she’s confident the project will go ahead.

In September, the regional council for the United Church sold the property to First United for $10*, meaning the ministry can tap into the equity to help fund the new building.

First United hasn’t held church services at its building at the corner of Gore and East Hastings streets since 2007, when the congregation had dwindled but the demand for social services continued to grow.

Instead of filling a church every Sunday with worshippers, the church became a full-time shelter and drop-in space.

The church also offers a wide range of programs that help people who live in poverty, a focus for First United since its first church was built on the site in 1892.

Historically, First United ran soup kitchens during the Great Depression, sent social workers out to help families living in East Vancouver, held language classes for newcomers to Canada and collected donated clothes and household goods for the thrift stores it ran throughout the region.

Ministers spread the church’s messages of Christianity and social justice through a radio station and a newspaper.

Social programs expanded during the 1960s and ‘70s, when training for young clergy members included living on the streets for a short period to experience what homelessness felt like, according to the book Hope Lives Here: A History of Vancouver’s First United Church, by Bob Burrows.

The new building will include a bigger kitchen so food service programs can be expanded, more space for adult education programs and a dedicated space where people who need rest during the day can come and sleep.

The building’s transformation from church to shelter wasn’t without problems: in 2011, women’s groups called out church leadership after several women came forward with allegations they had been sexually assaulted while staying in the co-ed shelter, and their concerns had been dismissed.

The same year, three pastors left amid demands from BC Housing and the City of Vancouver that the shelter comply with occupancy and safety regulations.

Lansdowne, who is a member of the Heiltsuk First Nation, said First United will have to continue to be aware of and respond to the fact that the church is rooted in colonialism and patriarchy. She said she is “working towards a process” of acknowledging those past harms. 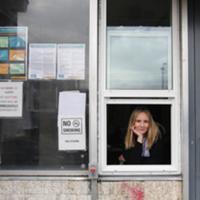 For Folks With Little Money, a Tax Service that Turns Lives Around

That history of colonialism is why it’s so important to Lansdowne that the church partner with an Indigenous housing agency and promote Indigenous leadership within the ministry. She envisions Coast Salish welcoming figures at the front of the building.

One thing the new building won’t include is a shelter: First United plans to move the shelter to another location that has not yet been determined, Lansdowne said.

“We built in as much flexible multi-space as we can so we can continue to be innovative and dynamic and responsive to the community, and we really wanted to maximize the built form of this building having permanent, affordable housing,” Lansdowne said.

“We didn’t make space for a permanent shelter in this building because our hope for the community is that before the life of this building is over, there will not be a need for a shelter.”