Critics are calling it another BC Hydro scandal. The Crown corporation, already beset by burgeoning costs and geotechnical difficulties at the controversial Site C dam, has racked up $1 billion of liabilities betting on interest rates.

BC Hydro revealed the losses in its first-quarter report, released in September.*

Marc Eliesen, former CEO of BC Hydro and Ontario Hydro, said the corporation’s gamble that it could predict future interest rates has backfired. “BC Hydro took a trip to the casino and played roulette and lost big time,” he said.

The interest rate hedging program began in 2016 with the goal of protecting ratepayers from higher future borrowing costs if rates rose.

Under the program, BC Hydro bought investment vehicles that would increase in value if interest rates rose. The corporation’s managers believed the profits could be used to offset higher borrowing costs if, as they predicted, interest rates went up.

“They thought they would make money on interest rate hedges and put it in a default account which would help offset borrowing costs in the future,” explained Richard McCandless, a former civil servant who wrote about the loss on his blog.

Instead, interest rates fell, and BC Hydro has lost money on the hedging program.

“It is a scandal,” said McCandless. “They took a gamble and lost.”

BC Hydro, which carries $23.3 billion in debt, anticipates the need to borrow another $10 billion between 2017 and 2024, partly to pay for the over-budget Site C dam and about $2 billion a year in other capital projects.

But as interest rates declined, losses began to increase sharply beginning in 2018. They have now ballooned to more than $1 billion.

“Will they continue to lose money?” asked Eliesen. “Yes, because all the monetary authorities say interest rates will be low or lower in the future due to the pandemic.

“We now have $1 billion in liabilities that will be passed onto Hydro ratepayers — the citizens who consume and pay for electricity in the province,” he said. “This is another black mark on BC Hydro, and no one has taken responsibility.”

Eliesen said the Ministry of Finance should have been involved in the decision to launch the program in 2016 and must share the blame for the losses.

BC Hydro CEO Chris O’Riley, appointed to the top job in 2017, and the corporation’s board are also responsible, Eliesen said, noting that the majority of directors are now NDP appointees, including board chairman Kevin Peterson.

The Ministry of Finance didn’t respond to Tyee queries, and BC Hydro wouldn’t answer questions about the hedging losses, citing the election campaign.

The Association of Major Power Customers, which represents large electrical consumers that account for 20 per cent of the province’s electrical demand, criticized BC Hydro’s debt management strategy.

“In an environment of lingering low-interest rates, ratepayers would benefit more from avoiding short-term hedging than they would from interest-rate certainty,” the association said. 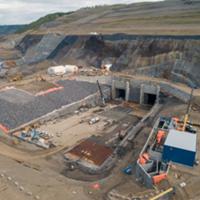 In the last decade, BC Liberal and the NDP governments have used the Crown corporation as a political football, interfering in the process of setting rates, overpaying for electricity generated by private power producers, allowing irregular accounting, subsidizing oil and gas companies and overestimating future electrical demand.

As well, the Site C project megaproject is far over budget and facing significant geotechnical difficulties that will likely push costs even higher.

Despite a host of critics asking for a temporary halt to construction while an independent assessment of geotechnical risks takes place, BC Hydro opened diversion channels on the Peace River’s north bank on the weekend.

“The media and the public have to be more educated on how this big Crown agency operates,” said McCandless. “There needs to be more focus on costs and less political interference.”

*Story corrected on Oct. 8 at 10:16 a.m. to reflect the month when BC Hydro released its first-quarter report.