The Globe and Mail reported on an immediate priority for the Crown corporation’s new boss.

Bell promised a focus on “encouraging generation from independent power producers and refiguring its transmission network to allow such producers to sell to multiple customers,” the Globe reported.

“The government wants these [independent power producers] to be businesses, and wants them to have capability to sell to a variety of buyers, not just BC Hydro,” Bell told the newspaper.

The plan for IPP sales to a variety of buyers soon fell apart because export prices collapsed after fraudulent market manipulation was halted in the U.S.

Private producers had a dilemma. They could abandon projects, terminate production, sell power at a loss — or have political friends impose a helpful solution.

The BC Liberals obliged by forcing BC Hydro to sign long-term contracts to buy electricity from the private producers at prices well above market and by prohibiting the publicly owned utility from adding materially to its own generating capacity. The contracts guaranteed BC Hydro would buy the power even if it wasn’t needed and pay high prices — with annual increases — even if market prices fell.

The choice was made not for the benefit of electricity consumers or B.C. taxpayers, but to satisfy the Liberals’ preference for private enterprise over public. That preference was almost universally shared by editorialists, media commentators and political writers. Government energy policies were roundly applauded.

But an important aspect went unmentioned. The new power deals assigned financial risks to BC Hydro and guaranteed revenues and profits to IPPs.

Indeed, the provincial utility has lost massive sums because of these contracts.

Since Campbell’s friend Larry Bell promised to assist private producers, BC Hydro has purchased almost $14 billion in power from IPPs — most at two to four times the market price.

BC Hydro is committed to buy more than $40 billion worth of additional electricity under contracts that run for 15 to 60 years.

Naive, stupid or dishonest politicians reasoned that demand for electricity would continue rising steadily in British Columbia and in the usual export markets. They ignored the potential for change.

But change did come. Industrial growth sagged because of globalization and more efficient consumer technologies. Alternative energy became feasible and affordable. Growth in electricity demand slowed and has been flat in B.C. since 2005. The value of export markets stayed low.

These changes were recognized by people outside government and corporate media. Will McMartin, writing for The Tyee, offered an accurate analysis, included in my 2010 article “Taxpayers carry financial risks for IPPs.”

“It all sounds great, doesn’t it? Self-sufficiency. Entrepreneurial risk-takers. Why, you can’t get more small-town than that,” McMartin continued. “Except, it’s all a sham. British Columbia under Gordon Campbell’s BC Liberal government has become increasingly dependent on non-B.C. owned corporations to produce high-priced electricity, which BC Hydro is forced (by government edict) to buy, and in turn sell at inflated prices to captive residential and commercial consumers.”

Longtime Tyee columnist Rafe Mair was another IPP critic. He raged about financial and environmental damages occurring under government policies that had numerous buccaneers working on waterways around the province.

In the 2009 election campaign, reading from Liberal talking points, candidate Brenda Binnie blamed Mair for spreading fear about IPPs. Of course, Liberals had a stake in the industry’s success. Some of the people involved with private power companies were former Liberals or friends of the party. Money changed hands in amounts large and small.

So, why do I bring up old news today? 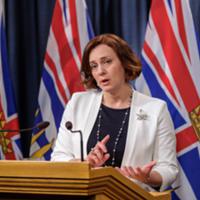 So that New Report on the Huge Private Energy Rip-off of BC Ratepayers?

The private power fiasco is so bad in 2020 that even BC Hydro — a company that avoids admitting faults — is singing the IPP blues. It issued a press release titled Demand Dilemma this month that says it is experiencing “unprecedented decline” in electricity demand. In addition to soft demand that has plagued the utility for 15 years, the COVID-19 recession has severely cut the amounts of electricity being used in western North America.

The IPP deals create a large problem, one that critics have known since the beginning. “This time of year is when the majority of the Independent Power Producers BC Hydro has agreements with are producing the greatest amount of energy,” the press release says.

BC Hydro’s dam reservoirs are also receiving large quantities of incoming water from snowmelt. Because most IPP contracts cannot be suspended or ended, BC Hydro has to reduce internal production and spill water without generating electricity.

So expensive private power replaces cheap public power, a financial disaster for a Crown corporation that is already troubled.

Even as the economy begins to recover after the pandemic resolves, low power demand will create additional problems.

LNG prospects are dim and large scale manufacturing has gone elsewhere and is not returning. Micro grids and self-generation will keep power loads from growing.

Site C, over budget and behind schedule, will someday be complete. But it will be expensive electricity, two to three times the price of alternative energy. It will simply add to the utility’s operating losses.

It’s time to bluntly lay blame for the billions of dollars BC Hydro has lost through mismanagement, particularly by the continuing IPP fiasco.

BC Hydro: From Public Interest to Private Profits

Gordon Campbell and his cabinet colleagues designed the damaging schemes. Christy Clark, along with Rich Coleman, Mike DeJong and others accelerated it. John Horgan, Michelle Mungall, Bruce Ralston and other NDP leaders failed to contain it.

Corporate media, particularly pundits in the BC Press Gallery, deserve a large part of the blame. With few exceptions, they chose to ignore the IPP issues and ridicule the online critics. Vaughn Palmer, Bill Good and Keith Baldrey scorned "Nincompoops ranting in their underpants.”

Electricity ratepayers, mostly residents and small to medium-sized businesses, suffer because of failures by politicians and major media. The public was badly informed and that has enabled losses that will ultimately measure in the tens of billions.

This should be British Columbia’s biggest political scandal, but the people responsible for it happening will never be held to account. On the contrary, the scoundrels have departed or will one day retire in unsullied comfort.