For the past several years, Mike Williams has had hanging over his head the possibility that a Calgary oil and gas company could kick him and his family out of their home. The Pembina Pipeline Corp. is trying “to fuck me over,” he told The Tyee.

Williams, his wife Jane and their four-month-old daughter live on a rural property in southern Oregon with fir trees “you can wrap your arms around” and a rolling hill leading to a wetland. Several years ago, he started getting calls from Pembina asking him to sell the property. At first, he claims they offered him $78,000, which Williams considered an insult. That would barely allow him to purchase “a trailer in a mobile park,” he said. Then the offer apparently went up to $300,000.

Now Williams worries that the company will use eminent domain, whereby the government allows private property to be taken over for projects deemed in the public interest, to run a 36-inch natural gas pipeline through his drinking water supply and turn the home he built from salvaged materials into a staging area for the construction. “That’s the worst thing,” he said. “They’re going to let a Canadian company eminent domain a U.S. citizen. It’s wrong.”

That may be what’s happening in private. But in public, the pipeline’s defenders are telling a much different story — in fact, their strategy is to not even mention Pembina by name.

The stand off with Williams is part of Pembina’s push to build the Pacific Connector, a 370-kilometre pipeline originally conceived to run natural gas from Canada to the southwest coast of Oregon. The Calgary company is also behind Jordan Cove LNG, a US$10-billion facility that would export the gas to Asia. The company states that “it values our connections to the community.” But with opposition mounting from Oregon residents like Williams and Democratic Congress members, the company, “which rarely seeks publicity” according to the Financial Post, is trying to keep as low a profile as possible.

Instead, it’s leaving the public-facing work of running advertisements and building political support to a new group called the Western States and Tribal Nations, which has close ties to the Donald Trump administration and the oil industry. Last month, Western States took part in a virtual speaking event with U.S. Secretary of Energy Dan Brouillette and American Petroleum Institute CEO Mike Sommers where they discussed how to support “exports of natural gas produced in western North America to Asian markets.”

Pembina isn’t listed on Western States’ website or included in any of the group’s promotional materials, however, and the group has told reporters that the Calgary pipeline company isn’t a member. But earlier this year, Western States’ president Andrew Browning told a meeting of Wyoming commissioners that “we have jumped in with full partnership with Pembina.” That same month, Western States ran a full-page ad in the Oregonian newspaper arguing that Pembina’s Jordan Cove gas project, which would be the first LNG export terminal built on the U.S. West Coast, would lead to the “economic revival of our nation.”

Strangely, environmental critics remarked, the ad didn’t once name the project’s true owner, Pembina. It also omitted the fact that most of the corporate profits from building the terminal and pipeline would likely flow up to Alberta; that much, if not all, of the exported gas will potentially come from Canada; and that despite the inclusion of “Tribal Nations” in the lobby group’s name, no tribes in Oregon or California appear to publicly support these projects. “It’s very manipulative,” Brook Thompson, a member of California’s Yurok Tribe, which is downriver of the proposed Pacific Connector route, says of the Western States group.

But the group’s founders have a long history of manipulation. Browning, the president of Western States, is also the chief operating officer of the Consumer Energy Alliance, which is in turn a front group for the oil industry. Consumer Energy Alliance has “channeled millions in corporate funding to become a leading advocate at the state level for [offshore oil] drilling,” according to a 2014 investigation by the Center for Public Integrity.

In 2011, The Tyee obtained over 300 pages of personal emails between a lobbyist working for the Consumer Energy Alliance, Michael Whatley, and his friend Gary Mar, a former Alberta Conservative cabinet member who became a Washington, D.C.-based diplomat. Together, Whatley and Mar created a campaign that had the look and feel of a grassroots movement but was in reality funded by major oil companies in order to fight state-level low carbon fuel standards that could hurt Canada’s oilsands.

“We need to get a team funded and on the ground in these 11 states as soon as possible,” wrote Whatley at the time, who was working on behalf of BP, Chevron, Exxon and other oil companies to undermine U.S. state and federal climate change legislation.

Observers in Oregon worry that those same tactics are being used once again to push forward a gas development that could destroy the state’s climate targets, pose risks to the water supply of tribal nations and result in people like Williams losing their homes. “They started that strategy to fight the low carbon fuel standards,” Shirley Weathers, an independent researcher in the town of Eagle Point who opposes the gas projects, told The Tyee. “Now, they’ve turned the Eye of Sauron on Jordan Cove.”

Pembina didn’t respond to The Tyee’s media request. A spokesperson for Western States wrote that “we don’t have any comment beyond what’s on the [website].”

The website for Western States describes an organization “working to facilitate economic development and tribal sovereignty through the development of domestic and global markets for natural gas produced in the western United States.” But critics say this is deeply misleading.

There is only one tribal government signed up with the group, the Ute Indian Tribe of Uintah and Ouray Reservation, and it’s based in northeastern Utah, well over 1,000 kilometres from where Pembina’s gas terminal would be built. No tribal nations in Oregon and California that would actually be exposed to the environmental impacts of the export facility and pipeline publicly advocate for those projects going forward.

“The worst-case scenario is a spill or contaminants leaking. The pipeline is going to cross over 400 waterways, including three major rivers, mine being one of them,” said Thompson from the Yurok Tribe. If the pipe were to burst, she said, “that would be an example of something we have no control of, that happens upstream in Oregon and impacts us downriver.”

Then there is Western States’ insistence that the gas pumped through the Pacific Connector pipeline and exported from Jordan Cove LNG to Asia would be “produced in the western United States.” That’s not how the Financial Post described these projects in a 2018 article entitled “Pembina Pipeline’s new purpose: get Canada’s oil and gas to the rest of the world.”

“Pembina is little known outside Western Canada, partly because it rarely seeks publicity, partly because much of its business has been in energy-friendly Alberta,” reads the profile by Claudia Cattaneo. “But its next game-changing project could be in the United States. Pembina is making progress on reviving the US$10-billion Jordan Cove Energy Project, a liquefied natural gas export terminal on the Oregon coast to process Western Canadian gas, which is in great demand in Asia, but prices have languished because of a lack of export infrastructure.”

Pembina currently has a permit from the United States Department of Energy “granting long-term multi-contract authorization to import natural gas from Canada to the proposed Jordan Cove LNG terminal in the port of Coos Bay, Oregon.”

So given that no tribal nations in Oregon and California have spoken out in favour of shouldering the environmental burdens, and with evidence suggesting many of the economic benefits will go to a private company in Alberta, why would Western States claim the opposite in full-page newspaper ads and during roundtables with members of the Trump administration?

“This is not a grassroots organization, it’s not a tribal sovereignty thing, it’s really just part of this bigger octopus of oil and gas,” Weathers argues.

If that’s true, then the tentacles of Pembina, via its involvement with Western States, stretch deep into the U.S. federal government. The group and its allies have hosted events with key Trump officials crucial to the Jordan Cove gas project’s future. Consumer Energy Alliance held a tele-townhall meeting in May with Neil Chatterjee, the Donald Trump-appointed chairman of the Federal Energy Regulatory Commission. Shortly afterwards, the regulator ruled that Pembina’s project can move forward, even while acknowledging that the project’s annual carbon footprint of two million tonnes “could impact the state of Oregon’s ability to meet its greenhouse gas reduction goals.” (Previously FERC had ruled against the project).

Western States recently conducted a roundtable meeting with U.S. Energy Secretary Dan Brouillette, who in July issued a “final long-term order” authorizing gas exports from Jordan Cove, saying the project “encapsulates what the Trump administration has been working hard on for the past three years — providing reliable, affordable, and cleaner-burning natural gas to our allies around the world.” Internal documents made public in early September show the Trump administration is trying to fast-track Jordan Cove LNG during the coronavirus pandemic. 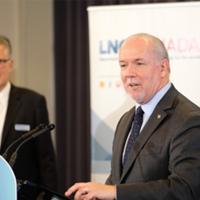 By Many Calculations, LNG Is a Fail for BC: Report

The project isn’t a foregone conclusion, however. Oregon Gov. Kate Brown has vowed to oppose Pembina starting construction until it’s secured all the necessary local and state permits, some of which are still up in the air. The Klamath, Yurok and Karuk tribes have vowed to “stand in fierce, firm and unwavering opposition.” There are pending lawsuits. Poor economics for natural gas might end up killing the project altogether. “It’s not going to be built,” Jeff Merkley, the Democratic senator from Oregon, told Axios last month.

But all this uncertainly is taking an emotional toll on Mike Williams. He feels “shitty” and powerless, knowing there is still a possibility Pembina will use eminent domain against him. Williams has no tolerance for the claims made by groups like Western States. All he sees is a Canadian pipeline company trying to kick him off his land so that it can build a project that will line the pockets of executives in Calgary.