Just a boat’s row away from Waglisla, or Bella Bella, lies the First Nations reserve of Kunsoot. Waglisla is itself a reserve and home to about 1,300 Haíɫzaqv (Heiltsuk) people on the central coast of British Columbia. Kunsoot is a place where Haíɫzaqv families used to travel in summer to catch salmon and otherwise practice their culture.

Soon, the site will once again open to Haíɫzaqv families, only this time as a $2-million-plus health and wellness centre — conceived of, designed and built mostly by the Haíɫzaqv themselves.

Kunsoot rises 72 years after the World Health Organization adopted a constitution that said, in part, “The enjoyment of the highest attainable standard of health is one of the fundamental rights of every human being without distinction of race, religion, political belief, economic or social condition.”

“Health is a fundamental human right,” as WHO’s director general reaffirmed in a speech in 2017. “No one should get sick and die just because they are poor, or because they cannot access the health services they need.

It is a sad fact of history that at the same time WHO member countries, including Canada, were adopting its lofty principles, Canada was pursuing cultural genocide against First Nations, Métis and Inuit peoples under policies that pretty much ensured they were denied basic human rights — that they would get sick and die because they were poor.

Last December, Statistics Canada produced a health report showing that even today, “life expectancy (is) substantially and consistently shorter for the First Nations, Métis and Inuit household populations compared with the non-Indigenous household population across all time periods” in Canada.

“The factors that contribute to longevity are complex and interrelated. First Nations, Métis and Inuit (share a) greater disadvantage relative to the non-Indigenous population in many of the social determinants of health. Moreover, the effects of colonization, racism and intergenerational trauma on Indigenous peoples have contributed to their poorer health outcomes and shorter life expectancies.”

Which Carrie Easterbrook, and other members of the Haíɫzaqv Nation, have decided to counter by simply refusing to wait any longer for Canada to keep its broken promises when it comes to the health of their community.

As she says, “We need to take care of ourselves and we need to be well. We have a right to wellness."

In a time of such social and political turmoil — as we witness the real-time collapse of so many systems that have privileged the few and disadvantaged the many over the past 70-odd years — it’s brilliant to witness the clarity and courage with which the Haíɫzaqv have declared their wellness to be a fundamental human right. And to do something about it.

Easterbrook is just one of a passel of young Indigenous leaders who have decided to take wellness into their own hands, under the guidance of their Elders.

“We just listened to our leaders, to our community, to our Hemas (hereditary chiefs), our matriarchs. And there's been a common theme throughout many, many generations: what do we need to be well?

“And the answer has been quite simple. And it's that we need to stay connected to our land and our resources, our culture and our community. And land-based healing is a huge piece of wellness for our people.”

Hence the new health and wellness centre at Kunsoot.

“You know what? There are a lot of experts in this community,” says Larry Jorgenson, long-time resident of Bella Bella and one of the instigators of the Kunsoot project. “Whether those experts are hunters or whether they're cedar bark weavers or whether they're net menders, if you go through and list all of the specialty talents that a community like this has, it's an amazing array of knowledge and capacity that we don't tap because we look for a different kind of authority and training and education.”

No longer willing to wait for outside “experts” to determine what health services they need, the Haíɫzaqv are about to open Kunsoot, a facility in which they’ll provide services to themselves.

Kunsoot, as the short film at the top of this article attests, is the product of all the stored expertise and energy of a community that has a growing reputation along the coast as a place that gets things done — on its own terms.

The film tells that story, but how Kunsoot came about is a story in itself.

About 20 years ago, the Qqs Projects Society, under Jorgenson’s direction, started running youth science and culture camps in the Koeye, which is a couple of hours by motor boat south of Bella Bella. Its summer camps taught a generation of Haíɫzaqv kids, and others, the importance of their culture by connecting them to nature and to the dances and songs and stories and other cultural learnings long suppressed by colonization.

The Koeye became much celebrated for its ground-breaking work, and at one point its reputation as a healing place for kids caught the ear of Tim Cormode, the Victoria-based CEO of Power to Be, which specialized in helping people with ability or access issues to connect with nature.

Cormode’s organization partnered with Qqs and BC Children’s Hospital to take child survivors of cancer to the Koeye, something he recalls as a “huge success,” but an expensive one. Access to Bella Bella is by ferry or airplane only and getting down to Koeye adds expense. “It was just too far.”

Cormode, meanwhile, had been asked by an anonymous funder how they might support health and wellness in remote communities, and about five years ago that funder started supporting programs in Koeye.

Whenever anyone asked about what was working in remote communities, Cormode said, “I said, ‘You gotta go to Koeye. You gotta see what they’re doing.’”

But in conversations with Jorgenson, Cormode learned that even for families in Bella Bella, the journey all the way to Koeye, limited by weather to summers only, was too long.

So was born the plan for Kunsoot, “and we gave them the financial resources to build it.”

“I’ve never bumped into that kind of philanthropy before,” Jorgenson said. “They are very dedicated to letting communities do things that make sense to them.” 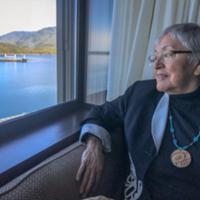 For First Nations, These Are Precedented Times

For Cormode, it’s simple. He found something that works, and “we invested [in] people, we invested in leadership.” He wishes more philanthropists would just cut to the chase and do that too. Find leaders, replicate what works.

Meanwhile, modelled very much on Koeye — but with communities free to do things their own way — the anonymous funder, with the assistance of Cormode, has put a total of $12 million into health and wellness initiatives in Alert Bay, Kyuquot, Ahousaht and in Kunsoot.

Jessie Housty, who has taken over day-to-day management of the Qqs Society from her father Larry, also serves on the board of Kunsoot. For her, what worked in Koeye will work in Kunsoot and maybe other places too.

“At the end of the day,” Housty says, “wellness is what the community defines it as.”