"We are the natives of this Country and we want all the land we can get. We feel that we own the whole of this Country, every bit of it, and ought to have something to say about it. The Government have not bought any land from us so far as we know and we are simply lending this land to the Government. We own it all. We will never change our minds in that respect, and after we are dead our children will still hold on to the same ideas. It does not matter how long the Government take to determine this question, we will remain the same in our ideas about this matter… We consider that the Government is stealing that land from us, and we also understand that it is unlawful for the Government to take this land." 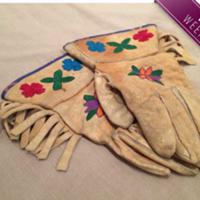 To the Tsilhqot'in, with Gloves

It's fascinating, don't you think, that the above declaration isn't from a modern-day statement of claim by the Nisga'a, the Haida, the Gitksan and Wet'suwet'en, or from the now widely-celebrated authors of the Tsilhqot'in rights and title claim who just weeks ago secured that massive victory in the Supreme Court of Canada.

The quote actually dates back 101 years, to hearings held in Aug. 1913 by the McKenna-McBride Commission, and the man who made that statement was Chief Bob Anderson, a Heiltsuk from Bella Bella. The Royal Commission visited Bella Bella back then as part of a study of the reserve system prompted by a dispute between native leaders who were unhappy with the tiny reserves allocated to them, and white settlers angry that the natives had any land at all. No prize for guessing how that all turned out, especially after Commissioner James A.J. McKenna declared his bias from the outset, saying: "A strong race [has] supplanted a weaker... Indians must accept the inevitable. Progress and development [cannot] be stopped." And nor were they. Well development wasn't, anyway. Progress? I guess that depends on whom you ask.

In the end, "Indians" were left with 843,000 acres of reserves in total, or less than 0.4 per cent of British Columbia. This, after the commission agreed to expand First Nations holdings by 87,000 acres of poor land, but only after it took away 47,000 acres of productive lands that it felt aboriginal people were incapable of exploiting for any good (i.e. commercial) purpose. "The value of the land taken away was three times that added to the reserves," wrote historian Jean Barman. "There the matter rested."

Well, not exactly. Having sequestered First Nations on their reserves, the government sold or tenured off vast tracts of Crown lands in exchange for "improvements," or "progress," such as logging, fishing, agriculture, mining and power production. On the central coast, much of it Heiltsuk territory to which the Crown continues to lay claim to this day, all sorts of fee-simple in-holdings were sold off. They were never offered to First Nations people, but fell into the hands of colonial profiteers.

Think Ocean Falls, home to what was once B.C.'s largest pulp and paper mill after Bella Coola Pulp and Paper Company acquired 260 acres of land in 1906. Now it's effectively a ghost town, although Marine Harvest Canada built an Atlantic salmon hatchery there, despite protests by the Heiltsuk First Nation.

Think Namu, another choice piece of Crown land made private and converted in 1893 into a fish cannery, which was eventually owned by BC Packers before changing hands a few times since the cannery stopped operating in the 1970s. Today, it's another environmental "ticking time bomb," says one observer, too contaminated for the Heiltsuk, who would dearly like to get the site back and build a satellite community there. Oddly, they balk at having to pay to reacquire lands they never ceded in the first place and, in the bargain, taking on an environmental clean-up that might reach $20 million before it's done and for which the past and current owners, and the Crown, so far deny responsibility.

Think, too, of the Koeye. The Koeye is one of the most gorgeous, ecologically significant watersheds on the entire coast of B.C. The choice lands around the perimeter of its keyhole bay were long ago parcelled off to private interests. One 200-acre piece, commanding a spectacular view of the sandy beaches at the mouth of Koeye River, and of the Inside Passage and Fitzhugh Sound, was logged off in the 1990s. Other parcels of "private" forestland along the river were due the same fate. Meanwhile, on the new clearcut overlooking Koeye, someone had the bright idea of building a sports fishing lodge.

And then, long after Chief Bob Anderson had died, his descendants did exactly what the chief told the McKenna-McBride Commission they would. Having "[held] onto the same ideas" as he had for more than 80 years -- which marked some of the darkest decades in Heiltsuk history -- the community literally drew a line in the sand at Koeye.

It was in the mid-1990s, recalls Larry Jorgenson. The fishing lodge had been built but the operators didn't have a foreshore lease, nor permission to build a dock. Heiltsuk chiefs travelled from Bella Bella by boat and, in full regalia, massed on the beach. They drummed, sang songs, danced, drew a line, and told the lodge operators to cease and desist from effectively trespassing on Heiltsuk lands waters. The lodge remained in private hands, people came and went, but it never made it commercially. "Without a foreshore lease, they went bankrupt," Jorgenson recalls.

Jorgenson, a social worker who moved to Bella Bella from Ontario in 1978 and married a Heiltsuk woman, Marge Housty, became a tolerated presence and, eventually, an accepted contributor to a community known to be miserly with its trust, and never shy to retract it. Among many other things, Jorgenson worked with Heiltsuk chiefs and community leaders to reclaim Koeye, hosting summer camps at the river mouth to connect youth to their elders, to their culture, and to their lands.

In 2000, Jorgenson put out a call for help to raise funds when the then-owners of the Koeye Lodge put the property up for sale. Ecotrust Canada (which I headed at the time) and Ecotrust, out of Portland, Ore. (led by Spencer Beebe) managed to secure a $1.1-million gift and we bought the Koeye Lodge. In 2001, title was transferred to the Heiltsuk, who became custodians of the lodge through a marvellous non-profit called the Qqs Projects Society. Qqs (pronounced kucks) is a Heiltsuk word meaning "eyes" -- the better to watch over all Heiltsuk territory, including the Koeye.

For a decade -- through Qqs, but also through a strong Heiltsuk First Nation band council and the community's highly effective Heiltsuk Integrated Resource Management Department -- the Heiltsuk have regained a commanding presence among B.C.'s coastal First Nations. They drove a hard bargain in the negotiations around the Great Bear Rainforest deal, which, among other important gains, saw the Koeye River Valley fully protected from further industrial development. There were once seven Heiltsuk villages along the river, Jorgenson says, and the Wuikinuxv people out of Rivers Inlet also lay claim to some of the Koeye lands and waters; so its protection was of enormous significance to First Nations on the central coast.

Last month, Gíƛa Elroy White paid tribute to the work that Qqs has done in Koeye. White, a Heiltsuk hereditary chief-in-waiting said, "If it wasn't for Koeye, our children wouldn't learn their identity. We have kids who are stronger because they know who they are. They are one with the land."

White was speaking at ceremony at the Koeye Lodge, an event that drew almost 300 people to Koeye on Aug. 16. It was a blessing not of the old fishing camp, but of a spectacular new lodge and a collection of bespoke cedar cabins that has replaced the unlovely old building we bought 14 years ago. That place was incinerated in an arson fire in Nov. 2011. As devastating as that event was at the time to Qqs, and to the community of Bella Bella (which would later suffer another fire that destroyed its band store and a remarkable library maintained by Qqs back on the reserve, there was something almost cathartic about the fire.

With insurance money and matching grants, Jorgenson and a determined crew of Heiltsuk and non-native workers and supporters cleared the mess from the site and got about building one of the most beautiful, inspirational and hopeful places on the B.C. coast -- designed, built and peopled by the Heiltsuk, its timbers harvested from Heiltsuk lands, and milled by Heiltsuk workers with a small mill they owned and operated themselves.

At the blessing, Heiltsuk chiefs walked all four sides of the new lodge, honouring it as a place "for teaching and sharing medicine with each other, with our children," in the words of 'Nusí Ian Reid. In stirring speeches, the chiefs honoured Jorgenson, whose Heiltsuk name, Yakvuλas, very roughly translates as one who gathers resources. It is hard to think of a better epithet for Jorgenson, who has proven over the years to be a master of making the impossible happen, against improbable odds, in one of the most tricky-to-access sites in the province.

Jorgenson didn't speak at the ceremony, as his family is still mourning the recent passing of Marge's father, and protocol forbids some forms of public speaking for one year after a death. But Jorgenson didn't need to say a word. He was clearly overcome by the whole event, but especially when the daughters of Thistalalh Ed Martin -- Ǧviustizas Joanne Green, and ƛ̓istalaɫ Maria Martin -- gifted him and Marge the Martin family crest of a raven transforming (Ed Martin is a kind of patron saint of Koeye, an elder whose death in 2005 is still deeply felt by the community). 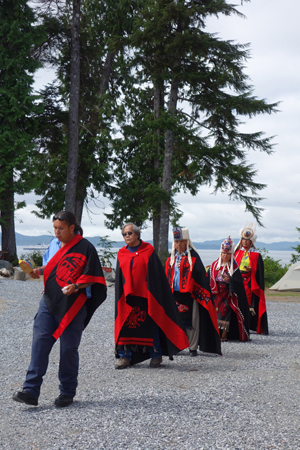 Later, Jorgenson allowed that the decision of a prominent family to hand over their crest was "such a huge thing," and not only because that gesture now requires them to get a new crest, and potlatch that. Jorgenson was obviously moved by the accolades for him and his family, and by extension the support for Qqs, but he later said he was most honoured by the "very loud message" sent by such a huge display of public support right there in Koeye.

It was the strong face of Heiltsuk people showing that, to recall Chief Bob Anderson, they "are the natives of this Country... [and they] ought to have something to say about it." It was an echo that harks back 101 years, even earlier, an ethos that resounds to this day: demand fairness, and if it isn't forthcoming, fight for it -- for generations if need be.

At a time when B.C.'s coast is under threat as never before, Koeye is back in business, schooling new generations of Heiltsuk children to hold onto the same ideas that Chief Bob Anderson had, back in the day. m̓ṇukvs w̓úwax̌di, as the Heiltsuk would say. One mind, one heart.