As deputy minister of energy, mines and petroleum resources, Dave Nikolejsin oversaw the decision to proceed with the LNG Canada project at Kitimat, but also bumped up against politicians and political staff in other ministries who felt he was pushing projects at odds with the government’s overall direction.

A B.C. government employee since 1989, Nikolejsin’s jobs had included being the province’s Chief Information Officer and heading the Environmental Assessment Office before leading the Ministry of Natural Gas Development starting in 2015.

When the new government folded that ministry back into energy, mines and petroleum resources in 2017, Nikolejsin was named deputy minister.

“It was a very interesting time to go from the heady days of an LNG ‘gold rush’ mentality, to scrapping to stay in the game as the worldwide LNG market grew from its nascent beginning,” Nikolejsin wrote in a June 4 email to ministry staff announcing his departure.

He pointed to the LNG Canada deal as a big achievement. “That project embodies the triple-word score of being net good for the environment, good for the economy, and embraced (largely) by First Nations.”

The world needs B.C.’s natural resources, Nikolejsin wrote. “If those resources don’t come from a place like B.C. that has extremely strong environmental standards, they will come from somewhere else. This is why CleanBC is such an important plan.”

Announced in 2018, CleanBC sets out a plan to get the province most of the way to meeting its carbon emission reduction goals while still allowing industrial development.

“I have spent a lot of time talking to industry about the importance of being ‘clean and green’ if they want to locate in B.C.,” Nikolejsin wrote. “This will be very important in the future. As the world becomes increasingly aware of climate change and consumers care about the raw materials that go into their devices, the bona fides that companies get from operating in B.C. will pay off.”

Ministry staff will have the “difficult job” of balancing development with the government’s broader goals so companies see the value of investing and people benefit from good jobs and government revenue, he said. “This is a monumental balancing act, but one I know that the EMPR [Energy, Mines and Petroleum Resources] team and colleagues in other ministries can and will continue to do so.”

Nikolejsin had in the past publicly criticized the government’s priorities and how they affected industry. Carbon taxes, changes to environmental assessment processes, implementing the United Nations Declaration on the Rights of Indigenous Peoples, and updating the labour code would all hurt competitiveness, he was quoted telling an audience at a 2018 oil and gas industry event. “You start to stack them up, and which straw breaks the camel’s back? That’s what I want to know.”

As The Tyee recently reported, some within government were surprised that Nikolejsin had kept his job despite the public criticism, something they saw in stark contrast to the April firing of well-liked environment and climate change strategy deputy minister Mark Zacharias.

There were also concerns about some of Nikolejsin’s social media activity since 2018, which included liking or sharing tweets about it being impossible to be both Christian and gay, accusing billionaire George Soros of financing riots and interfering in United States elections, and blaming the spread of the novel coronavirus on people eating bats.

Not long before announcing his resignation, Nikolejsin sent an email to numerous recipients within government with a picture of a cat tipping over a laboratory bottle labelled “COVID-19.”

“Finally, some Friday comic relief,” Nikolejsin wrote. “The first attachment is a top secret photo from Wuhan that has leaked out that shows how the virus was actually released. Cat owners will be able to relate.”

Sources said the email led to a complaint to the Public Service Agency from a recipient who found it racist. A spokesperson for the agency, which is housed in the Ministry of Finance, said they would not be able to say publicly whether or not there had been such a complaint. 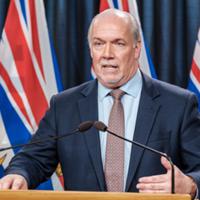 The vast majority of the cases of COVID-19 in British Columbia were from the same strains of the virus present in Europe and the United States, according to findings provincial health officer Dr. Bonnie Henry recently released.

Nikolejsin didn’t respond to a request for an interview.

In his email to colleagues, he said that having worked with three premiers and many ministers, he believed all were intent on serving the public. “Sometimes we might disagree on priorities, but that’s OK. That’s the system working. No one thought three years ago that a minority government could last this long, but here we are!”

He said he plans to work a few more years but doesn’t have a new job to go to immediately and looks forward to having time to spend with his first grandchild, due in the fall.

The new deputy minister at energy, mines and petroleum resources is Fazil Mihlar, a former Fraser Institute director who the NDP government kept on staff in 2017 to the surprise of some of its own supporters. Christine Kennedy replaces Mihlar as the new deputy minister in jobs, trade and technology.