One of the top civil servants in the NDP government worked for the right-wing Fraser Institute and the Vancouver Sun, shooting down mainstream ideas like the need for environmental assessments, the right to organize unions and the requirement that employers pay a minimum wage.

First hired to work for the government under Christy Clark’s BC Liberals, Fazil Mihlar was made the deputy minister of jobs, trade and technology after Premier John Horgan’s NDP formed the government in July with the support of three BC Green Party MLAs.

Some NDP supporters quietly questioned the decision to keep Mihlar on at the time, but after he left with Horgan and others on a recent trip to Asia, former MLA Harold Steves made his views public, first on Twitter and then in an interview.

“It’s really disturbing,” Steves told The Tyee. “It’s logical for the Liberals to have hired somebody who was a former director of the Fraser Institute, but it’s not logical for the NDP to keep someone on with that background. And not just background, but basically those beliefs.”

Steves was an MLA in the 1970s Dave Barrett government that introduced lasting changes including the agricultural land reserve and ICBC. He remembers people opposed to the government setting up the Fraser Institute to promote corporate interests.

“They were there basically to prevent social democracy from spreading in British Columbia and the rest of Canada and that’s what they’re all about,” he said. “They’ve been successful in fighting progressive policies and programs for the last 40, 45 years since they were founded.”

The public policy positions Mihlar has held over the years are easily documentable, with his name appearing on numerous reports, columns and tweets over two decades.

In columns for the Vancouver Sun and in postings on Twitter, Mihlar has been an outspoken promoter of oil and gas development, including pipelines and tanker traffic, and a strong critic of people who oppose such projects. Many of those views were noted when Clark first appointed him.

“He hasn’t shown any indication of changing his views at all,” Steves said. “He’s opposed to the minimum wage, there’s a whole pile of other issues that are totally the exact opposite of general NDP philosophy.”

Mihlar was unavailable for an interview.

“Modern public servants are not expected to hold uniform beliefs, and are encouraged to advance ideas and express opinions,” he said. “I believe wholeheartedly that our ability to represent society's full range of needs, viewpoints and interests in the analysis we provide to Cabinet is strengthened by diverse perspectives and experiences.

“I am extremely proud of public servants that bring independent thought, enthusiasm and consummate professionalism to the task of serving Cabinet and the people of this province.” 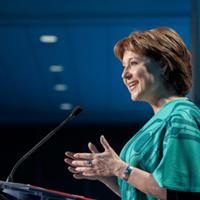 Steves said that while it’s true there are many career civil servants who work their way up and can work with whatever government is elected, Mihlar shouldn’t be seen as one of them. “Those that are basically brought in from the outside because of a certain political philosophy that’s in tune with the government of the day are generally replaced by the new government. That’s always been so until this government came along, and that’s what’s a shocker.”

It sends a signal about how the NDP intends to govern, Steves said. “What it tells me is the new government is more in tune with the Liberals than they are with say the Dave Barrett NDP government that I was part of. That means there’s been a major shift in NDP party philosophy over the past 30 or 40 years, to the point where they are now almost indistinguishable from Liberals.”

The results of that philosophy can be seen in the government’s decisions to continue building the Site C dam on the Peace River and to keep pursuing liquefied natural gas projects, Steves said. “It’s the Site C and LNG thing that’s really got longtime party members angry because these have been policies we’ve debated for decades and it was mostly NDPers [fighting against them].”

On Site C in particular, he said, “Suddenly all of us who fought it down years ago are all on the outside.”

Whether or not it’s because the government is taking advice from Mihlar, it’s headed in the wrong direction, Steves said. “It’s jobs over the economy, jobs over the environment, which I think is dead wrong.”