Wet’suwet’en hereditary chiefs and the federal and provincial governments announced Thursday they have agreed to move forward with an agreement that lays the groundwork for acknowledging the nation’s rights and title.

The details of the memorandum of understanding, which is to be signed May 14, have not been released.

And the process has already been criticized by Wet’suwet’en elected councils that have authority over reserves in the nation’s traditional territory in northwestern B.C.

The step has been years in the making. It has been 33 years since the Wet’suwet’en and Gitxsan, neighbouring First Nations, began the decade-long Delgamuukw-Gistay’way lawsuit that would ultimately affirm their title to 55,000 square kilometres of land — 33,000 for the Gitxsan and 22,000 for the Wet’suwet’en.

Ron Mitchell was there for every word of the historic trial.

The Wet’suwet’en clan chief was raised on the territory, speaking only the Wet’suwet’en language. He didn’t know it then, but his elders were grooming him to take the hereditary name Hagwilnegh, which he accepted in 1989. He is now speaker for the Likhsilyu clan in the Potlatch hall.

Mitchell was one of four translators during the trial. His late father Alfred Mitchell, Chief Xemsim, gave evidence.

Mitchell said the agreement is an important milestone.

“This is the first of its kind, the three governments getting together and signing an MOU like this,” he says. “Up to now, the [provincial and federal] governments have been dictating.”

The agreement acknowledges the three governments will work together as “equals.”

“We look forward to advancing this important work to implement Wet’suwet’en rights and title as three equal governments,” the joint statement reads.

It was developed during three days of discussions in Smithers in late February.

Those talks came during a dispute over TC Energy’s Coastal GasLink pipeline, which is under construction on Wet’suwet’en territory. The 670-kilometre, $6.6-billion pipeline will ship fracked gas from the province’s northeast to a terminal near Kitimat under construction by LNG Canada.

But Wet’suwet’en hereditary chiefs have opposed the project and formally evicted pipeline workers from their territory on Jan. 4, days after the BC Supreme Court granted TC Energy’s application prohibiting anyone from blocking road access or otherwise interfering with pipeline construction.

The chiefs and their supporters blocked the Morice West Forest Service Road, which remained closed until RCMP enforced the injunction over five days in early February. In total, 28 people were arrested at four encampments between Feb. 6 and 10.

Mitchell says the decision to ratify the memorandum is a positive step for the Wet’suwet’en people that builds on the success of the Delgamuukw-Gistay’way case.

Speaking for his own clan, the Likhsilyu, he said most members are on board with the terms for moving forward with an agreement between the First Nation, province and federal government.

“With our clan, it was a majority. Of course, there were some that questioned it and we did as much as we can to explain,” he says. “Mind you, this MOU is only a start. It’s a step past the Delgamuukw-Gisday’wa court case. This should have happened 23 years ago.”

Clan meetings were underway to discuss the agreement and the nation was poised to host an all-clans feast when the pandemic shut down B.C. in mid-March.

Instead, after meeting individually, the clans met online to discuss and decide on moving ahead with the memorandum of understanding.

On Friday morning, elected chiefs for the five Wet’suwet’en band councils that signed pipeline benefits agreements issued a statement saying they had not offered their support for hereditary chiefs to sign the agreement. The consultation process “lacked any semblance of credibility,” they said.

“Discussions must adhere to a process where all clan members, Hereditary Chiefs and Elected Chiefs have an opportunity for full and informed engagement, as well as full consensus. These discussions have not taken place, nor have we voted on the MOU,” the statement says. It adds that because of social distancing measures this is not the time to ratify an agreement.

“We welcome engagement and collaboration with our fellow clan members, the Hereditary Chiefs and all levels of government, once it is safe for our communities to gather. In the interim, we ask that this premature joint statement be withdrawn.” 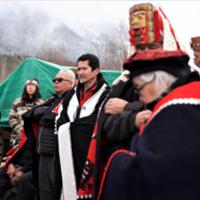 ‘We Have to Stand Together’: A Tale of Two Nations

The Tyee reached out to the elected chiefs, but none would agree to be interviewed. Rosemarie Skin, elected chief of the Skin Tyee Nation, said she was meeting with the band’s elected council and hereditary chiefs on Friday afternoon.

Hereditary Chief Na’Moks of the Tsayu clan, whose English name is John Ridsdale, defended the decision to move forward despite the pandemic.

“We didn’t do the feast part yet because of COVID-19, but right now was the right time to move forward,” he said.

“This is all that our elders ever wanted. That is why Delgamuukw-Gisday’way started,” he says. “There are three levels of government. We know that. There’s going to be federal, provincial and ourselves. There won’t be one above the other. You can no longer ignore the Wet’suwet’en voice.”

Details of the document, which is a page and a half long, won’t be released until an online signing planned for May 14.

Chief Hagwilnegh said the original document allowed for one year of negotiations on next steps in defining the relationship, but that is likely to change with COVID-19.

Both the province and hereditary chiefs have made it clear that the pipeline issue is separate from rights and title talks that have been happening in the background for more than a year.

Molly Wickham (Sledyo’), a member of the Gidimt’en clan who was arrested at a previous police action on the Morice forest road on Jan. 7, 2019, visited her home on the territory this week and said RCMP patrols and pipeline work have continued while land defenders have been isolating at home and at camps on the territory.

While she thinks the agreement is a positive step, she adds the pipeline issue remains.

“I think that it’s great, but it’s not addressing our current, immediate issues. It’s a little disappointing in that sense, because the whole reason why [governments] came to the table was because of the conflicts that were happening on the ground around CGL,” she said.

“So, I’m a little bit skeptical of the whole process. I’m quite aware that the government is really good at the art of distraction, but I also have a lot of faith in the chiefs and I know that they’re dedicated — and that we are dedicated — to protecting the territory and getting the RCMP off the territory and stopping CGL from going through our territory.”

While the memorandum may not have resolved any current issues between the Wet’suwet’en and Coastal GasLink, she believes an agreement will lead to clarity about industrial development on Wet’suwet’en territory.

“For future projects, they’re going to have to have the consent of the hereditary chiefs… the whole goal of implementing title is that consent has to be achieved so that we don’t end up in this kind of situation again,” she said.

Wickham expresses concern about describing the roles of three governments on Wet’suwet’en territory as “equal.”

“That’s not what the ancestors fought for.”