Rats aren’t the most adventurous creatures. They tend to stay close to home, scurrying between their nest or burrow and a reliable source of food often less than 150 metres away.

They prefer to move at night, under the protective cover of darkness.

But take away the rat’s food and, in desperation, it can transform from a relative homebody into an explorer, a hunter, a predator.

For some rats, measures to slow the spread of COVID-19 mean food supplies have dried up, particularly in once bustling tourist centres and along now-deserted restaurant rows. Abell Pest Control, which has offices across Canada, says it has seen a 50-per-cent increase in calls about rats relative to 2019.

“Hungry rats are going to do whatever they have to do,” says Corrigan. “Once the food goes away, then all bets are off as to how mammals are going to behave.”

Their foraging will take them further from home and they may squeeze under any doors they can fit through in search of food.

If they don’t find something to eat, rats can become aggressive, turning on the mice they tolerate when food is abundant and even each other. They’ve been known to snatch hatchlings from the nests of songbirds or stalk pigeons and attack from behind.

How rats are affected by social distancing measures will vary city by city and even block by block, says Corrigan.

For a rat that feeds almost exclusively from a reliably messy garbage can in a residential neighbourhood, things may not change much, if at all. But in areas where the people have all but disappeared from the streets taking their food scraps with them, the situation for the local rats could be dire, forcing them to move into new areas in search of sustenance.

“There is no universal rat explosion going on right now,” says Corrigan, but people should “be on alert.”

In Vancouver, there are concerns about an increase in rat activity in the Downtown Eastside, where many people don’t have the ability to practise social distancing in their own home and service cuts have forced more people on to the streets.

“The sidewalks are more crowded, there’s more people on the streets, there’s more people who are actually homeless as well because of really restrictive guest policies in a lot of [single-room occupancy buildings] and supportive housing,” says Fiona York, co-ordinator of the Carnegie Community Action Project.

York says there is more garbage on Hastings Street and it would make sense there are more rats in the area.

Chrissy Brett, an advocate for people who live at the Oppenheimer Park tent city, says a shift to takeout meals by service providers has increased garbage in the neighbourhood. People are being asked to eat outside instead of in communal meal halls to maintain physical distancing, but Brett notes there aren’t enough garbage cans available for the extra trash.

More needs to be done to improve conditions at the park and in the Downtown Eastside more generally, she says. Additional garbage cans and more frequent garbage collection, additional handwashing stations, access to clean water, and better bathroom facilities are all needed.

While a possible increase in rat activity is far from the only health concern in the Downtown Eastside, rodents do pose a health risk.

Kaylee Byers, a PhD candidate at the University of British Columbia who studies rats in the Downtown Eastside, says “rats do carry a number of pathogens ... that can potentially make people sick.”

Research conducted by the Vancouver Rat Project found some rats in the Downtown Eastside carry pathogens such as Bartonella bacteria as well as MRSA, a staph bacteria, says Byers.

“Beyond disease risk, living with rats or seeing rats or being in close contact with them can cause anxiety and fear,” she says. 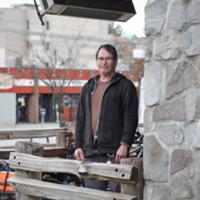 In a statement a City of Vancouver spokesperson said officials are taking steps to try and address garbage issues by adding additional street sweeping and litter collection and working with community services groups to increase cleaning in certain areas.

An increase or shift in rat activity could be an issue in other neighbourhoods as well. Across the city, there are steps people can take to deter rats that may be on the hunt for food.

“I always advise the smartest thing you can do to prevent rats from getting around your property is ask yourself how do I do my own trash and how does my neighbour do the trash,” says Corrigan. “That’s pretty simple but it’s amazing how we look past it.”

“We should look at our own nest, and if we maintain our own nest correctly, we’re not going to have parasites. And the rat is a parasite. It’s a kleptoparasite, it steals from us,” says Corrigan.