Some drug users in Vancouver’s Downtown Eastside will have access to a safe supply as part of the city’s response to the COVID-19 crisis.

Vancouver Mayor Kennedy Stewart announced today that the federal government has given the go ahead for a program to supply users with safe drugs, rather than leaving them to buy from illicit dealers.

The province is now working on the details of implementing the safe supply, which will be announced in the coming days.

“We must tackle the poisoned drug epidemic, something that was already cost us more than 1,000 lives,” Stewart said during a news conference.

Advocates have long argued that a regulated, controlled supply of drugs of guaranteed quality would reduce deaths. The coroner’s service estimates that drug overdoses — largely due to substances contaminated with fentanyl — caused 981 deaths last year.

The COVID-19 crisis added urgency to the issue because of the risk the virus could be transmitted when people bought drugs on the street or used with others.

Trey Helten, a manager with the Overdose Prevention Society, told The Tyee this week that the pandemic has also resulted in fewer ships coming into port, reducing the drug supply. The resulting higher prices have left those desperate for drugs talking about robberies, he added.

Stewart said it’s estimated that 20 to 30 per cent of drug users in the Downtown Eastside neighbourhood are not connected with health-care providers or safe consumption sites. The safe supply plan is intended to focus on this group.

“It’s in the public’s health interest to make safe supply a priority,” Karen Ward told The Tyee this week. Ward is a well-known neighbourhood advocate who was recently hired by the city as a full-time crisis response co-ordinator for the Downtown Eastside.

“The last thing you want is 3,000 opioid addicts sick and angry, doing anything they can to get unsick,” she said.

Drug users need options other than “contaminated” street drugs to be able to enter “the treatment side of the spectrum,” she said. 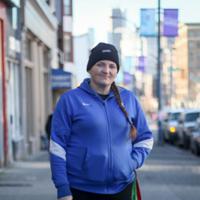 Stewart also said the the city will open emergency response centres in the Roundhouse and Coal Harbour community centres. The staffed spaces will provide shelter beds for people who have no alternative or are showing symptoms of the disease.

The city is responding to growing concerns about the risks of COVID-19 transmission in the neighbourhood, where residents have long struggled with challenges around shelter, poverty, health and drug use.

Many service providers and drop-in centres have closed because of the pandemic, cutting residents off from everything from support to showers to meals.

The closures also increased the difficulty of getting information to residents about how to avoid getting the virus or infecting others.

On March 19 the city declared a COVID-19 state of emergency.