Patrick Condon turned his urban planner’s eyes on a trio of massive changes sweeping the world and found new purpose for his profession — even some optimism.

You may wonder why, given two of the shifts. One is the decline of the middle class and widening wealth inequality. Another is the global migration from rural areas to cities, fuelling “out of control urban growth.”

Sounds not good at all. But into this recipe Condon folds another established trend, the fact that birthrates almost always drop wherever populations are urbanizing. So he expects cities to expand quickly, but then stop growing later in the century.

As he told The Tyee, “Most of us grew up fearing that population would eventually crush the planet under the weight of too many mouths to feed. Suddenly within the lifetime of my kids that may not be true.”

Condon projects out such curves in his new book Five Rules for Tomorrow’s Cities: Design in an Age of Urban Migration, Demographic Change and a Disappearing Middle Class.

He concludes the future of humanity may well rest on how cities evolve to reflect the emerging new realities. Therefore, those who build and govern cities should be guided by the five rules he presents. If they’re followed, we have a much better chance of adapting to the trends, Condon writes.

In which case, ideally, a generation or more from now, city dwellers will require less money and use less energy in order to enjoy a good life. 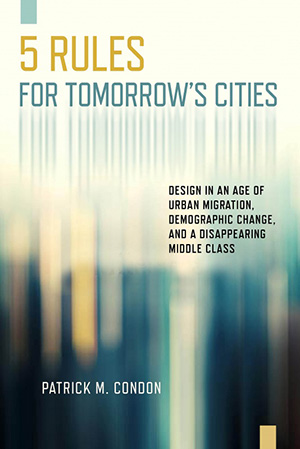 Patrick Condon on why he wrote this book: ‘Given that most cities will stop growing sometime around 2060, what designers and planners do during these two generations will have a very long lasting legacy indeed.’

Readers of The Tyee will know Condon as an informed and often iconoclastic contributor to these pages, regularly pressing for new responses to Vancouver’s housing unaffordability. He is adamant, for example, that global capital has broken the market, so government must take a far more robust role in providing non-market housing, ideally built on publicly-owned land.

Condon ran for mayor of Vancouver on the COPE ticket in the last election until a stroke, from which he’s recovered, knocked him out of the contest.

Condon started out as a community organizer in his hometown of Brockton, Massachusetts before becoming a professional landscape architect. He arrived in Vancouver in 1992 to become chair of the University of British Columbia’s landscape architecture program, and since 1996 has held the UBC chair in Landscape and Liveable Environments.

He also founded UBC’s urban design program. Among his award-winning work has been helping North Vancouver plan to become a carbon-free city.

That ethos animates his previous book, Seven Rules for Sustainable Communities, out of which grew a series in The Tyee, including how the rules could be applied to make the Lower Mainland a much more livable place with a lighter ecological footprint.

The followup, Five Rules for Tomorrow’s Cities, is gaining attention. It’s been spotlighted by U.S. News and World Report, and author and Globe and Mail columnist Doug Saunders called it “a masterpiece of urban thought” that “should be on the desk of every municipal leader.”

We spoke with Condon about what’s in the book and how his base city of Vancouver informed his insights. Here is a lightly edited version of that conversation.

The Tyee: I think I’ve heard you describe yourself as a cautious idealist. This book reflects that, I think. Tell us more about what, if everything breaks just right, might work out for humanity after all.

Condon: Yes, I think that’s fair. For example it’s not great that people can’t afford a family or a big house anymore, and can’t afford to buy a lot of stuff to fill up the three-car garage. The upside is that the lifestyles of the late 20th century were killing the planet: too many resources, too much driving, too much plastic, too much everything. Younger people around the world get that and are moving to smaller impact, smaller places, spending money on experiences instead of stuff. More avocado toast, fewer snow blowers!

The three waves in my book can really be seen as an organic trend toward a sustainable planet, more diverse cities and more jobs serving each other in various ways. It could be great. And of course being an urban designer, I think design can make the difference between utopia and dystopia. Design certainly can make the difference between a dysfunctional and a livable city.

The book is quite readable. You seemed to be reaching beyond the technical audience.

Right. It’s for everyone interested in cities really. But I was specifically thinking of my urban design students who come from every corner of the globe and very different cities. So I was trying to write a book that could somehow connect to all of their experiences and provide them with “rules” for city design that could apply both to low-income districts in Mumbai and high-income districts in Vancouver. So it was a stretch.

Can you give us the elevator pitch on each of those five rules, then? And maybe how they apply in this region of the planet?

Sure. In this book I am constantly trying to use cases from our own part of the world to draw general rules and suggest applicable strategies practical in our world. So it may be a long elevator ride but here goes.

Rule one: “See the city as a system.”

Systems thinking has been the dominant development of late 20th-century science. Systems thinking can help regional decision-makers make better decisions, on transit for example, by putting more money into the frequent transit bus network and less into isolated and not broadly useful big-ticket toys like the Broadway Subway.

Patterns and networks are the crucial elements of urban systems. Vancouver for example has a very concrete pattern of arterial streets on half-mile increments. It gives us great neighbourhoods like Commercial Drive or Dunbar Street. And yet our planning policies seldom recognize and reinforce these patterns. Our fixation on steel and glass high-rises is emblematic of this problem. They’re seen as the solution to all problems when more sustainable mid-rise wood structures would do — and better enhance the vitality and affordability of neighbourhoods.

The financial and ecological constraints that “future proofed” cities must deal with call on urban designers to use a lighter and more intelligent hand with infrastructure; systems of roads, pipes and wires that are lighter, smarter, more affordable and more intelligent are needed.

I really like the unpaved lanes of south Dunbar area — so rich with vegetation, so little impact on receiving streams, so cheap! The very opposite of the thinking that gives us an $8-billion hole in the ground to the end of a peninsula. I’ve been vocal in slamming the Broadway Subway project. “Lighter, greener” is part of why I think it’s a waste of money and not what we’ll really need.

Housing can oftentimes cover more than 80 per cent of all urban lands. Thus the health of housing districts is the health of the city. Yet as inequality worsens, housing is increasingly unaffordable for wage earners, not just in the developed world but worldwide. This rule has the most immediate relevance to our local housing crisis. I think there are planning tools such as zoning and development taxes that could literally solve this crisis, if only we had the courage to use them.

Rule five: “Adapt to shifts in jobs, retail and wages.”

Globalization and increasing inequality are eroding job security and income for average wage earners. The proliferation of the “gig economy,” for better or worse, is already changing the face of cities. In Vancouver, more and more of our younger wage earners are in the gig economy. Uber, Grub Hub, Door Dash, are just the tip of the iceberg. Job security is vanishing, but entrepreneurial options are accelerating.

Cities need to relax the distinctions between work and home in such a new world, and spend more time attending to the people who are falling through the cracks in this dog-eat-dog world.

You live in Vancouver and are very engaged in the region’s planning debates. How did that inform your writing of this book?

I spent some time in Mumbai for example and was struck by the similarities. Same high-rises, same kind of port, same global investment, same migrations, same struggles of the working and middle class. Slightly different ocean!

Okay, but Vancouver proper, and even a lot of its neighbouring cities, are pretty well built-up and highly planned. Land is at a premium, and what gets redeveloped is tightly regulated. By contrast, in your book, you find inspiration in some of the least planned urban zones on the planet — the favelas of Colombia for example. What do those places have to teach us?

Some call South American favelas slums but that’s very far from the truth. They teach us that the most efficient, affordable and resilient city is one where the increments of development are small enough for people to self-manage.

Our Vancouver example of the same idea are the so-called illegal suites, now made legal, that owners snuck in their basements to help pay off their mortgages, and along the way provided tens of thousands of affordable — till lately — rental suites. 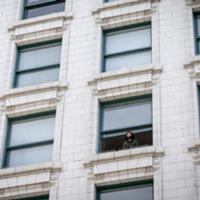 A Window into Making the City of Glass Greener and Happier

Small is beautiful is the lesson of the favela.

So is this a good time to be an urban planner? When you are teaching at UBC, what do you advise young people considering making a life in the field?

I say it’s the best of times and the worst of times. The changes will be convulsive and painful and will all happen during the same period we have to solve the climate crisis.

But, the next 40 years are going to be a time of amazing change for cities around the world. These changes may have the upside of leaving us with much more sustainable cities than the ones we have now.

And given that most cities will stop growing sometime around 2060, what designers and planners do during these two generations will have a very long lasting legacy indeed.