The moment of transcendence arrived, as it often does, late in the proceedings and from an unexpected quarter.

“Reconciliation is not just non-Indigenous peoples’ work, it’s our work too.” So said Teresa Windsor, community cultural worker with the Haisla Nation Council, at a feast this weekend in the rec centre in Kitamaat Village, on B.C.’s north coast.

“We have to reconcile with ourselves,” she said.

Supported on her right by Cecil Paul Jr., and on her left by Amalaxa Louisa Smith, a respected Xenaksiala Elder, Windsor implored her people, especially Haisla youth, to not just bear witness to what was happening during Saturday afternoon’s feast, but to honour the gift their elders had fought long and hard for, before many of them were even born.

“To the young people here,” she said, her voice cracking with emotion, “It’s not too late to join the Magic Canoe.”

Windsor was one of many devotees who assembled in Kitamaat from near and far to pay homage to their great navigator, Wa’xaid, Cecil Paul, on the occasion of his rather unlikely induction into the fellowship of the Royal Canadian Geographical Society.

Wa’xaid, physically frail at 88 but highly attuned to the significance of the ceremony, entered the feast hall to the drumbeat and song of the Spirit of Kitlope Dancers, stopping every few steps to bow his head and sweep his hand in a sort of royal wave to more than 100 villagers and visitors.

Paul is a legend on the B.C. coast, at one time billed as a “hero of the planet” by the Rainforest Action Network for his work in the early 1990s to protect the Kitlope Valley from industrial logging — a community-led conservation victory that inspired much of the work that led to the Great Bear Rainforest’s protection many years later.

Paul discovered on a trip back to his long-abandoned birthplace that the Kitlope’s ancient rainforests were flagged for logging. He returned to Kitamaat with marking tape torn from old-growth trees along the riverbank. He set out to alert his own community, and eventually the world, that the Kitlope was about to be destroyed.

“I was alone in a canoe,” he has said. “But it was a magic canoe. It was magic because it could make room for everyone who wanted to come on board, to come in and paddle together. The currents against us were very strong. But I believed we could reach our destination. And that we had to for our survival.”

More recently, Paul has been in the news as co-author of Stories from the Magic Canoe of Wa’xaid, as told to Royal Canadian Geographical Society fellow Briony Penn. (The book was celebrated recently in The Tyee’s year-end list of inspirational authors. As Tyee founding editor David Beers put it, “The Magic Canoe felt the product of good faith, the stuff of hope.”)

And now Paul is winner of the Louie Kamookak Medal, named for an Inuit historian and educator and awarded to Paul by the society for “having made Canada’s geography better known to Canadians and to the world.”

A citation read aloud by a governor of the Royal Canadian Geographical Society, John Pollack, noted Paul’s “extraordinary determination and his ability to build consensus saved the Kitlope, an intact temperate rainforest watershed and the traditional territory of his ancestors.” Paul was given honorary membership in the College of Fellows of the RCGS, and now has a certificate and a lapel pin to prove it.

Judged by the traditions of the society, Paul’s expeditionary journey — born on the banks of the Kitlope River; stolen from his family and abused in one of Canada’s most notorious residential schools in Port Alberni; spat out into a life of alcohol abuse and racism; then an almost mythic return to his birthplace, to sobriety, and to ideaship of a Magic Canoe that could propel the efforts of his own people and followers from around the world to protect his home from logging — well, it’s almost the inverse of the explorer’s journey that has characterized most of the “discovery” of Canada through its post-contact history.

In Paul’s small village on the weekend, Louisa Smith — herself a hero of the Kitlope campaign — welcomed guests. “You are all medicine to my brother Cecil,” she said.

Gagamguist Gerald Amos, who was the Haisla’s elected chief when Paul first alerted the band to plans to log the Kitlope, and who was himself instrumental in the campaign to prevent that from happening, rose to “thank our people for standing with us.”

He went to say that recognition by the RCGS was significant because “Cecil has always hoped to hear an apology from the Queen for what happened in the residential schools.” To much laughter, Amos said that since Paul is now a “royal fellow,” maybe he’ll get a word with the sovereign and get that bit of unfinished business done, too.

Throughout the proceedings, Paul didn’t speak, but he frequently nodded his approval. He smiled a lot. And, from time to time, he beamed, as when a video came on screen from faraway Kenya.

“It has been a huge inspiration learning about your story of the Magic Canoe,” said Nelson Ole Reiyia, who first heard about the Kitlope at the World Indigenous Network Conference in Darwin, Australia, in 2013. There, he learned of Paul’s Magic Canoe from Toronto-based Ric Young, with whom Ole Reiyia subsequently co-founded the Nashulai Maasai Conservancy in the Maasai Mara.

“My brother Ric talked glowingly about you, and how you led a revolution, or something akin to it, to reclaim back your ancestral land from destruction. That story was so inspiring to us as a people in Kenya… who are also facing similar environmental, social and cultural challenges. Your story of courage, your vision for your people, inspired us into establishing our own community led conservancy… and saving our land for the people and wildlife.”

Ole Reiyia expressed a hope to one day meet Paul. “Be blessed, our dear brother and friend.”

Such is the power of Paul’s story — the courage, clarity, humility and simplicity with which Paul and his fellow Haisla and Xenaksiala peoples pursued their dream of protecting the Kitlope — that his Magic Canoe has reached places in the world that have never even seen a canoe. 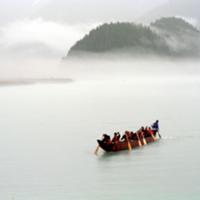 Back home on the weekend, Louisa Smith, herself a survivor of a residential school, told the Kitamaat gathering that she’s lately been pondering the meaning of the word home. “I decided that home is here,” she said, touching her heart.

And it’s in the big, generous heart of places like the Kitlope that there is still room, in a world where it sometimes feels like we’ve discovered everything and learned very little, for people like Teresa Windsor, and hopefully a lot more young Haisla besides, to take to heart the message from their elders — from their “Bubba” Paul in particular.

That’s where the Magic Canoe took Cecil Paul. And for all of us, as Windsor said so eloquently in Kitamaat, it’s the idea that it’s never too late to join the Magic Canoe, no matter where it is in the world that you call home.