That the VSB hire a field expert to establish a policy that outlines an impact-focused, structured response to hate-motivated crimes and/or actions as evidenced by the breach of a student’s/child’s or staff’s safety. This policy should clearly outline a structured response, in the immediate, short and long term, for directly impacted students/staff, indirectly impacted students/staff, and perpetrators, and should specifically include:

1. clear, transparent and accountable actions to be taken by administration and staff in the case of such an incident, and
2. a process of restorative justice, accountability and restitution for impacted students and staff and for student perpetrators, and
3. a commitment to full and complete communication with designated caregivers of students and the broader school community about any incident, whilst maintaining proper measures of student/staff confidentiality.

BE IT RESOLVED THAT the Trustees of the Vancouver Board of Education (VSB) direct the Superintendent of Schools to create a strategic plan that includes short (one-year), medium (three-year) and long-term (five-year) actions that the district will take to address racism and discrimination in Vancouver Schools. An interim report to be presented at the June 3, 2020, Policy & Governance Committee meeting.

A Vancouver School Board committee has called on the district to hire an expert to create a policy for responding to “hate-motivated crimes and/or actions.”

The next step is consideration by the full board on Dec. 16.

But some parents say the process demonstrates the district’s failure to act quickly in response to instances of racism and hate.

Rita Baboth’s daughter left Lord Byng Secondary School after being subjected to racist bullying. She had reported a racist, violent video made by another student in 2018 that was shared on social media.

The school and district response were slow and inadequate, Baboth said.

“The reason we’re still talking about this is the same behaviour is still there,” she said. “It’s not only the school system: it’s everywhere. No one wants to talk about racism in Canada.”

It came after several high profile discrimination incidents in the district over the past year, including the 2018 Lord Byng video, which led to two Black students leaving the school, and a homophobic, sexist, anti-Semitic and racist list attacking roughly 100 Eric Hamber Secondary students that was created by some of the school’s Grade 12 students this spring.

The motion was inspired by frustration with the official response to incidents and the lack of policies setting out what trustees and district staff should do for students beyond ensuring their immediate physical safety.

School district superintendent Suzanne Hoffman, a non-voting member of the committee, said senior district staff support “the inherent message and meaning behind the motion that Jennifer is putting forward.”

The district does have administrative procedures that instruct staff on how to respond in the immediate aftermath of a discriminatory act. But the policies do not set out steps to follow up with students or prevent such incidents in the first place.

Reddy said the current procedures are “a guideline and instructions for staff to be able to follow when something happens, and they’re very specific.”

“Whereas what I think a policy does for us, as a governing body, is help us with risk mitigation and liability, ultimately, as well as what we’re presenting to students and staff as what they can be guaranteed when they walk into our doors.”

Katherine, another student who left Lord Byng following the sharing of the racist video, spoke in favour of the motion at Wednesday’s committee meeting.

She said the district’s failure to have policies guaranteeing support for students affected by racism is damaging.

“I felt like I didn’t matter to my school and the adults in charge. I was extremely anxious going to school every day last year. It was like holding my breath for six hours a day,” said Katherine. (The Tyee is not using her last name to protect against repercussions.)

“The only support I had was from my mom and Grade 8 counsellor,” she said.

Other students, including her own friends, didn’t understand what she was going through, she told the committee, because they don’t know what it’s like to be subjected to racism.

“This is what I think needs to happen in the future: racism, diversity and inclusion education for kids starting at a very young age,” she said. “Make racism education an important part of the B.C. curriculum. Teach kids why racism is wrong; don’t just say it’s wrong, as they won’t care. It will just be another meaningless rule.

“Kids also need to understand there are serious consequences to racism, bullying, and homophobia. Without clear consequences, kids will continue to behave in the same way.”

The motion was originally presented to the board on June 24 at their last meeting of the 2018/19 school year. Trustees sent the motion to the policy and governance subcommittee, which didn’t meet until October.

The subcommittee sent the motion to the district’s legal department for review. It raised issues including the name of the proposed policy — “hate-motivated crime and/or actions” presupposes intent and calling all discrimination “hate crimes” is “inappropriate,” the department advised — and conflicts with the district’s freedom of information and privacy obligations.

Committee members agreed those details could be worked out by the board. 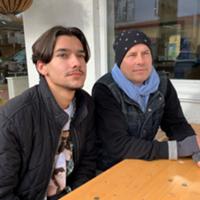 Cho’s motion calls for the district to develop “Racism & Discrimination Strategic Plan,” and for Hoffman to report on progress by June.

“The primary goal of this work is to develop a proactive strategy to combat racism and discrimination, and to communicate this strategy to the community,” she said.

After the meeting Baboth and Marie Tate, a representative from the BC Community Alliance, an umbrella organization for Black Vancouverites and their allies, spoke to reporters. The alliance has filed a BC Human Rights complaint against the district over its response to anti-Black racism in schools.

Both women spoke to the subcommittee in support of Reddy’s motion, breaking into tears when describing the impact racism in schools has had on them and their families.

Baboth noted it has been more than a year since the Lord Byng incident that harmed her daughter. 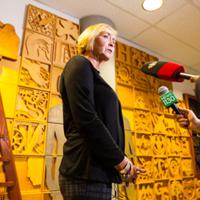 “It just seems like nothing being done after like a year, and not only that, the fact that they keep saying they’re actually doing something and they’re not doing anything about it, that actually makes me more angry,” she said.

The BC Community Alliance has been interviewing Black students and their families about racism they experienced in district schools to bolster its human rights complaint.

“We’ve had four, five generations of people having these same experiences,” she said, adding the stories from students today sound like something out of the 1950s.

Tate said she’s pleased the motion is one step closer to passing. But cautious.

“Policy is one thing,” she said, “but implementation is another.”