The federal Liberals have unearthed a 2005 video in which Andrew Scheer, now running to be Canada’s Conservative prime minister, rejects any form of gay marriage.

In so doing, he staked out a position that at the time was more to the right of even Stephen Harper’s.

Let’s look at the record. In the resurfaced video, Scheer says, “Two members of the same sex may use their God-given free will to engage in acts, to cohabit and to own property together.

“In that sense, they have many of the collateral features of marriage,” Scheer explains, “but they do not have its inherent feature, as they cannot commit to the natural procreation of children. They cannot therefore be married.”

To be a leader for all Canadians, the Conservative Party leader should now end his lifelong boycott of Pride events and explain whether he would still deny same-sex couples the right to marry, as he said in Parliament. pic.twitter.com/5WEyja6Ov5

Just the year before, Harper had grudgingly endorsed civil same-sex unions outside of church weddings.

Tom Barrett traced Harper’s views on the matter in a Tyee article published in 2004:

“In 1994, the Calgary Herald ran a headline stating ‘Two Calgary Reformers Back Gay Rights.’ Harper, who was one of the Reformers named in the article, would later tell Western Report magazine: ‘I really got burned in the press on this one.’ Harper explained to the magazine that his true position on gay rights was ‘don’t ask, don’t tell.’

“Gays, he said, should be protected from discrimination in commercial or employment practices. He said he would accept the inclusion of ‘sexual orientation’ in the Canadian Human Rights Act if it were ‘clearly defined, but not if it were used as a precedent for further benefits like marital status,’ the magazine stated.”

In 1994, Barrett reported, Harper was unequivocal in stating: “I do not support the legal recognition of same-sex relationships.”

By 2004, ten years later, Harper was telling CanWest News that his position on the issue had evolved. But not to affirming equality. Harper now said he would accept the concept of same-sex civil unions under provincial laws but opposed requiring churches to confirm same-sex marriages. 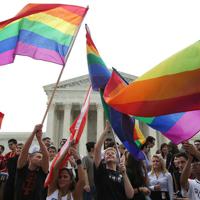 Scheer apparently had not accompanied Harper even that far on his moral and intellectual journey. In addressing the House of Commons in 2005, he clearly, if pedantically, lays out his position:

“How many legs would a dog have if you counted the tail as a leg? The answer is just four. Just because a tail is called a leg does not make it a leg. If Bill C-38 passes, governments and individual Canadians will be forced to call a tail a leg, nothing more, but that is not inconsequential, for its effect on marriage, such an integral building block of our society, would have far-reaching effects.”

What Scheer terror did gay marriage prompt in the young MP, 25 at the time?

Society’s “very survival requires” conceiving and raising children, he argued. “Homosexual unions are by nature contradictory to this.”  As if no straight people ever adopted children or conceived artificially.

The Toronto Star today reported that a Conservative campaign official said Scheer “supports same-sex marriage as defined in law and as prime minister will, of course, uphold it.”

However, “the Scheer campaign did not say whether Scheer’s personal beliefs on same-sex marriage had evolved, nor did they respond to the question of Scheer’s continued refusal to participate in Pride parades.”