Bob Joseph wrote the national bestseller 21 Things You May Not Know About the Indian Act to help answer questions about Indigenous history, particularly First Nations history, since Canada imposed the genocidal Indian Act in 1867.

But it ended up sparking many questions from readers about what they can do to improve Indigenous relations, given Canada’s 150-years-plus failure.

“A lot of the media interviews that we got had a lot to do with that, where people were just asking, ‘What do we do? How do we do it?’” said Joseph, son of hereditary Chief Robert Joseph Sr. of Gwawaenuk, who founded the charity Reconciliation Canada.

Whether the ultimate goal is a business deal, partnership or a reconciled Canada, the Josephs have suggestions on what to do and what not to do when creating respectful relationships.

The Tyee spoke to Bob Joseph on the phone earlier this month about their new book and his thoughts on Canada’s reconciliation progress. The interview has been lightly edited for length and clarity.

The Tyee: Who is this book for?

Bob Joseph: We would hope that Canadians would want to reach out and gravitate to it. Most of the experience that I gleaned can apply to lots of different organizations. We’ve trained everybody from the Ontario SPCA to Fortune 100 companies, and all levels of government in between.

Is this book also for someone who’s interested in helping to further the 94 Calls to Action of the Truth and Reconciliation Commission on an individual level?

Absolutely. A lot of the information initially was gleaned from those sorts of corporate, government clients. But we did realize there was a need for the average Canadian citizen to learn.

I started blogging a few years ago as a way to get out the free hints and tips. And to give you a sense of how interested people are, when I first started blogging we maybe had 700 people a month come to our website, which I thought was fabulous. But we’re at 106,896 visitors in April. And they are just from all walks of life: we had people who’ve reached out about going kayaking or canoeing with their family and wanting to do protocol; conference organizers wondering how to acknowledge Beothuk [in Newfoundland and Labrador] who are not even there anymore. 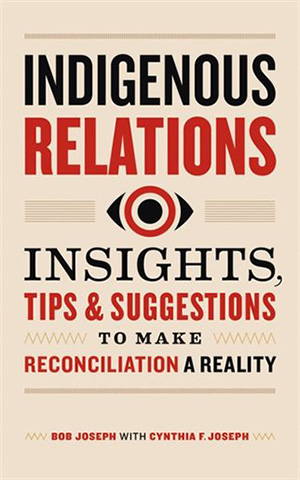 And they’re downloading free ebooks. When we published ‘27 Tips on What to Say and Do to Get Working Effectively with Indigenous Peoples’ after the first month we had maybe 1,200 people download the copy of the ebook. Then I thought, I’m going to publish ‘23 Tips on What Not to Say and Do,’ because I’m just curious more than anything. And that one was downloaded over 10,000 times. That’s what people want to know: they’re interested, they’re curious, but they don’t want to say the wrong thing and get off on the wrong foot. We definitely have been trying to reach that very mass audience.

How well can reconciliation work under capitalism?

We’re sort of stuck with capitalism right now. And we do need to work together, and I think that may give us some different ideas about capitalism as we get to know each other a little bit better... Indigenous Relations will really pull people together and get them onto a common ground and help them avoid the things not to say. And in doing that, we’ll really start to learn each other’s points of view.

The Indian Act was put into place on the basis that [Indigenous cultures] are primitive cultures. ‘They live short, brutish lives, and what we need to do is help and make things better for them.’ And my dad, he’d say, ‘If anybody ever says that to you, tell them that we were working less than nine weeks a year, and we weren’t paying taxes at the time of contact, and ask them how what they have is better than that.’

I think, as we get into the relationships, we’ll start to pull each other in those directions. We’d [find a] more communal sort of collectivism, and not be so worried about growth for the sake of growth. I think there’d be a lot of learning that would come out of getting to understand each other and being able to create a safe space to see different world views.

A lot of your recommendations in the book boil down to Indigenous awareness and sensitivity training. Why is this so important?

If the readers go and check out the 94 Calls to Action a lot of them say that — to learn about the history, the culture, the UN Declaration on the Rights of Indigenous People. It is just a common theme. The political leadership who were working on the Calls to Action, they just saw that as a really crucial step. It was serendipitous in that sense. We’ve been already doing that work for decades, but they came out and said ‘yes, this is what needs to happen.’

I was just reading a report on employment recruitment and retention. And they were interviewing Indigenous employees who are leaving organizations, asking them, what’s your biggest reason? And the biggest reason they listed was actually lack of awareness [of Indigenous cultures and history] on the part of the employers they tried to join, fit in and be a part of. It just seems to be a very common theme.

And of course, it’s something that we do. We have online and public workshops, and we do lots of private sessions. It’s just thematic; whether they do it with us or not us, it really doesn’t matter.

For those individuals who want to help further reconciliation, it’s a lot of research and a lot of work. Is it possible to simplify that? Or is the research part of the work that should come with reconciliation?

One of the exercises we do in all of our workshops is we ask people to think of a date in history that’s specific to Indigenous people. We start to flip chart those responses, and at the top of the flip chart we’ll have the old dates: Christopher Columbus; Jacques Cartier; and the land bridge. At the bottom of the flip chart will be all the recent dates, like the 2010 Winter Olympics. What often ends up appearing, though, is a gap in the middle from 1867 to the 1970s.

People were looking for a place to start filling in the gap, and that was what we were trying to accomplish with the 21 Things You May Not Know About the Indian Act, because that’s where all of that stuff was happening: residential schools; banning of potlatches; and overthrowing hereditary chiefs with elected chief and councils.

My tip for getting started — start at the beginning, and work through today. And what I tell our learners is, ‘As you’re working through the timeline, just try to always get a different perspective.’

If your sense of history includes Christopher Columbus discovering the New World, try to find out what the views of Indigenous peoples would be about that discovery. ‘Columbus discovered the New World,’ bothers them, because there were a lot of people there that didn’t consider it a ‘new world.’

How are we doing with reconciliation in Canada?

I’m really happy about reconciliation. I know academia has committed to this, kindergarten to Grade 12, certainly indigenizing their content and decolonizing their institutions. Give it 15 years, and that stuff will just transform this country. And I think it’ll have great effect.

I do hear the frustration of ‘It’s not happening fast enough,’ ‘It’s a dead horse,’ but I just keep trying to encourage people not to make reconciliation a political football. It’s going to be an ongoing process. It took us over 130 years to get into this mess, there’s no way we’re getting out in three or five, it’s just not practical to even think that that could happen.

And honestly, in Ontario, there was a big pullback from reconciliation education. So there may still be large pockets of the country that aren’t taking important steps. But there’ll still be lots of other places in the country. Teachers in Ontario organized a national Twitter chat about 21 Things and how to incorporate it in curriculum. It was just so cool that even though there’s some pullback, the teachers are still saying, we’re in; we want to do this. That’s why I’m bullish on reconciliation: it’s just going to take more time than people are sort of giving it.

In the book, you asked people to imagine a future Canada. Where do you see reconciliation in 150 years?

I think what will make us a great society and a great country is that we’ll have this shared common understanding, and that we’ll really be respectful of differences. Respect has always been a core thing. We’ve tried to teach people that’s the way that we’re going to be able to survive — if the world can actually go another 150 years at the rate that we’re seeing climate change.

To be able to do that, though, would require a group of peoples to be able to get along. That’s what reconciliation can deliver, that ability to get along, even though we got off to a really, really bad start. If we can make amends and figure out how to live and work together, coexist and be respectful, I think it’s going to be a pretty cool world. If we let divisions in there, then we’re going to really struggle.