Since the darkness of sea star wasting disease fell upon the Pacific coast of North America in 2013, scientists have been working overtime to shed light on the consequences to the area’s complex marine ecosystem. At least 20 species of sea stars from Mexico to Alaska were affected by the disease, but the sunflower star, an aggressive predator with 24 arms, was hit the hardest. Sea star wasting disease rendered it into a pile of goo and spines.

A new, decade-long study, which began six years before the outbreak and concentrated on two species at five intertidal sites in Vancouver’s Burrard Inlet, adds depth to the data. The study confirms that sea star species suffered unequally during the outbreak, and reveals that at least one species benefited from diminished competition. The study tracked the changing abundances of the purple or ocher sea star and the mottled sea star.

“You can’t know that things are changing unless you were paying attention to how they were to begin with,” explains Alyssa-Lois Gehman, a disease ecologist and post-doctoral researcher with the Hakai Institute and the University of British Columbia.

Gehman and her team found that purple sea stars — the more aggressive and numerous species — declined in overall numbers and average size. In comparison, the mottled sea stars fared much better, Gehman says. By 2016, densities of mottled sea stars had increased fivefold from pre-outbreak numbers.

Tracking the shifting sea star populations was difficult work. A dozen dedicated volunteers, including some of the researchers’ family members, helped out by counting sea stars during low tides in the cold, wee hours of the morning. Most of the counts at the five sites were conducted in winter, when mottled sea stars move from deeper waters to forage in the intertidal zone.

The work involved “fumbling around in the dark” for four hours at night, says Sharon Kay, a UBC undergraduate student. On one occasion, the police investigated zoology professor Chris Harley, supervisor for the study, following a public complaint. Surveying led Harley and the team right into the ocean views of wealthy property owners. “The owners noticed people with flashlights and got a little worried,” Kay says.

Although the worst of the sea star wasting outbreak has passed, the disease lingers at lower levels in coastal waters, Gehman says. Mottled sea stars still dominated the intertidal waters at the end of the study, but purple sea star declines had leveled off. 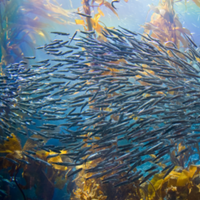 Out of Death, Knowledge About Sea Stars’ Vital Role in Kelp Bed Health

The scientists hypothesize that sea star populations may be more resilient to the disease going forward. Also, exceptionally warm ocean conditions are thought either to have helped trigger the outbreak or fueled its spread, and those have since abated.

What scientists know is that purple sea stars are a keystone species with a disproportionately large effect on a marine community, and their decline could dramatically impact other species into the future. Then again, mottled sea stars may simply take their place and continue to eat the same prey, such as mussels and barnacles.

It may also be just a matter of time before purple sea stars recover, send mottled sea stars packing, and reclaim their place of superiority in the intertidal zone.

“It’s fascinating, the complex dynamics between the species,” says Gehman. The study highlights the importance of studying a community of species, and not one in isolation. “If we’d just been looking at one species at a time, we wouldn’t be getting the full picture.”