On Friday, hundreds of students walked out of school and gathered outside the Vancouver Art Gallery to protest inaction on climate change, joining a movement of similar student “strikes” across the planet.

For many, it was the first rally or protest they’d ever attended.

“We are here because we have dreams, we are excited about what a post-carbon world will look like, and we want to commit to building it today, because we know we are at a crossroads,” said organizer Rebecca Hamilton, 16, of the group Sustainabiliteens of Vancouver.

The Tyee was there to ask students the simple question: Why are you marching today?

Read on to hear some of the voices, and see some of the faces, of Vancouver’s School Strike for Climate Emergency.

“I’m really feeling enraged that [government officials] haven’t taken action, and that they know that this is happening and still aren’t making the difference. But I’m also feeling happy that all these people are here trying to fight for what they believe in. It’s really inspiring.” — Jackson, 13

“I want to have a future. I know we’ve been given a 10 to 12 year timeline and if something is not done, we’re screwed. So I’m here to bring awareness to what’s happening and hopefully get the government to do something about it. — Sarra, 16

“I’d like to have a future that’s safe, because the way things are going right now it’s not going to be safe. I’ve read articles about how the ocean won’t be healthy enough for us to go into it, without hazmat suits and things like that.... It’s something we have to work on, it’s our duty to take care of the world. It’s our job to take care of everything that we stand for. — Taisia, 16

“It’s disappointing that we’ve had a lot of time, people have been talking about [climate change] for 30 years, and nothing has happened. People continue to be so money driven, driven by oil and making money. It’s gotten so much worse, and governments still aren’t taking action. There are still government officials and presidents who don’t believe in climate change. I think it’s just really disappointing.” — Emma, 16

“I figure, as a student social worker, that we need to fight for our youth and fight for their future, because it’s their future and their children’s future that’s at stake. We need to make a difference.” — Caelum, 29

“I’m here to support everyone else that’s here. It’s important to preserve what we have and truly admire it. This is our opportunity to make a better future, or at least the most we can, because past generations have done so much harm to this planet... I’m looking to individually make a difference, even though it may not hit big corporations right now. If I start early, it will hopefully make the whole movement start early.... I’m really excited. I’ve never been to something like this. I’m really glad my first one is something that I’m passionate about.” — Lucy, 18

“I’m here to get my voice heard. This is a student and a youth march because we’re the future, our planet is eventually for us, so the people making the decisions that will impact how we’re going to respond to climate change, they’re not going to be here for it that much longer, so it makes sense that they might want to have profit over planet. On the other hand, we’re at a very crucial point right now where if we don’t do anything our ecosystem is going to collapse. We’re going to be underwater. We’re at a point where we still have time to go back on all the decisions that we made, and actually save our Earth.” — Emilie, 18

“I know it’s a really important issue and people in power aren’t treating it as so. In 11 years I’ll only be 26 and my life will barely have begun, and I want to have a positive future on a good earth. I’m happy to see how many people are here and how many people care and how many are taking action and coming away from school.” — Megan, 15

“It’s our future, and when we grow up we’re going to have to deal with the consequences that the people who are living now are creating, so we’re here to stand up against it.” — Sapphire, 16 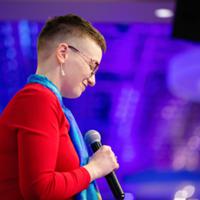 “It’s really inspirational to see everyone out here, and the fact that all these youth are coming out and coming together and being one unified front rather than all of this polarity that we’re seeing, I think it’s just really great. I’m very hopeful for the future.” — Claire, 17

“I’m surprised by how many people came. I came last minute. It’s nice to see so many young people. Most people skipped school or are taking time out of their day when they could be doing something else, not participating. Young people are often described as not motivated but clearly they are, to make a difference in something that’s super important.” — Liam, 17

“There’s no ‘planet B’ if this Earth is gone. There’s no other Earth. We can’t come back and erase it. It’s not a video game. We can’t respawn, we don’t have multiple lives.” — Sevek, 14