Thank you First Call. And thank you to The Tyee — I wouldn’t be here today if it wasn’t for this publication that’s continued to employ me through thick, but mostly thin, times, honing me into the journalist I am today. Not too many outlets would let a reporter put a social justice lens on their work, let alone actively support that view. I’m very lucky to work at The Tyee.

This award is an incredible honour — being recognized by the people who I interview, whose reports I’ve pored through and stories I have tried to amplify, is for me a flashing neon sign that I’m doing something right.

I’ll be honest: I’ve been thinking about making this speech since I found out I would receive this award almost four months ago. In that time I haven’t been able to come up with any words that wouldn’t be preaching to the choir.

So much of what I report on comes from the hard work of the people sitting in this room. You know the child poverty rate in B.C. You know how important affordable early childhood education is. Some of you have shared deeply personal stories with me to shed light on issues still facing youth today. I wouldn’t be able to do my job without your work.

Your work has made change happen. Both the federal and provincial governments have put more money into child benefits. In this province, $10-a-day childcare is a reality — at least for some families. Indigenous graduation rates are rising, and Indigenous youth continue to blow everyone away with their leadership in climate, treaty, environmental, housing and child welfare advocacy.

Every B.C. school district has a policy in place to protect queer, lesbian, gay, bisexual, trans and two-spirited kids from bullying and harassment.

Youth from care have tuition waived at every public post-secondary institution in the province.

But there’s still so much work to be done.

This province sits on unceded First Nations territory, yet Indigenous kids, First Nations and Métis, make up over two-thirds of kids in care. Their grad rates are still significantly below the provincial average. Poverty and racism against Indigenous youth and their families runs rampant, and overcrowded, subpar housing is still often the only option available to them.

There are adults out there today actively working to undermine the protections put in place for trans and queer kids, despite the fact that they make up a disproportionate number of homeless youth, are more likely to be bullied and are still being rejected by their families in 2019.

All over B.C., housing for families is rare and outrageously expensive. Subsidized child care spots are still scarce. Families on income assistance and disability still live well below the poverty line. So do those working minimum wage jobs.

Special needs children are being sent home from school because there aren’t enough supports to provide the education they are entitled to.

And then there’s global warming. We have 12 years to turn around a fossil fuel-addicted global economy before it’s too late and youth today become much worse off than their parents.

Ten years ago I interned in a local newsroom — not The Tyee — and an older reporter, a baby boomer, somewhat jokingly told me, “My generation screwed up the world. It’s your generation’s job to fix it.”

I didn’t show it, but I was livid.

In my experience young people are often ignored by the older generations. Dismissed as being frivolous, ignorant parrots of their parents/teachers/friends/mass media’s beliefs. Incapable of nuanced, intelligent thoughts.

And yet look at where previous generations have brought us. To the brink of humanity’s destruction.

I’m not saying this to inflame the generational wars, but to say that instead of dismissing the younger generations — until you need them to clean up their parents and grandparents’ messes — we should start listening to and including them now.

Why not have a youth rep on every school board? On every city council? Where is the youth outreach in neighbourhood planning? Are they represented in treaty negotiations? What about in efforts to find solutions to our ongoing housing, homelessness and overdoses crises?

I say this as someone who has spent the last eight years reporting on kids and youth by talking to a lot of adults. There are some good reasons for that — kids under 18 should have some layers of protection from media, like requiring parental consent to interview them. But there are also bad reasons, like telling kids in care, their foster parents and their biological families that talking to media — which is their right — will only make the system harder on them. 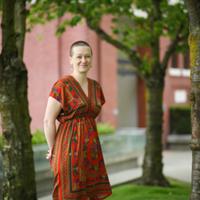 Our Katie Hyslop’s a ‘Champion’ for Kids

But today I want to challenge all of us, myself included, to reach out and include youth voices in our work. Consult with them on anti-poverty initiatives. Give them voting positions on your boards. Involve them in your local area planning process. Support their grassroots efforts, let them lead the conversation. Because, after all, what good is a leader of tomorrow if they have no experience?

I really appreciate this award. The people who have won it before me — Raffi, Cindy Blackstock — are true heroes and even having my name said in close proximity to theirs is a mind-blowing achievement for me. (I think my family is more excited about the possibility that I’ll get to meet Raffi than anything else.)

But as appreciative as I am of this award, I want a future where it’s not needed. Let’s work together — young and old — to lift children and youth in this province to the level where they can be their own champions. Champions we listen to and respect.