The BC Liberal opposition called the strategy “underwhelming,” and an anti-poverty advocacy group says it leaves gaps.

But Shane Simpson, the minister of social development and poverty reduction, said the plan is long overdue and puts the province on track to meet its legislated targets for reducing poverty.

“This has been a priority for our government since our first day in office,” said Simpson at an event at the Options Early Years Centre in Surrey.

The 48-page strategy includes measures that were announced in February, like the Child Opportunity Benefit that will provide payments to families for each child under the age of 18, $10 million for a community rent bank and a commitment to share gambling revenue with First Nations.

Simpson noted that a panel looking at basic income is to report back in 2020, and the fair wage commission has a report coming on livable wages.

“It’s a strategy that at its heart is about people,” Simpson said. “We’re working to create a culture of empathy, understanding and respect for everybody who needs help.”

It noted that B.C. has the second highest rate of poverty in Canada and that 40 per cent of the people living below the poverty line are working.

“For a province as wealthy as B.C. those numbers are much too high, and they don’t have to be,” Simpson said.

Simpson recalled introducing a bill a decade ago that called for the BC Liberal government to create a strategy like the one he released Monday. The government failed to support it.

For many years B.C. was the only province in Canada without a poverty reduction strategy. The BC Liberal government argued a plan was unnecessary.

BC Liberal critic Marvin Hunt said the government’s plan was underwhelming considering creating it took 15 months and $1.2 million. “This reads more like another NDP re-announcement than a substantive government strategy,” he said in a news release.

The focus should be on growing the economy and creating well-paying jobs, Hunt said. “British Columbians need more than a redistribution of money. They need access to opportunities, and the NDP is failing to deliver.”

Adrienne Montani, the provincial coordinator for First Call: B.C. Child and Youth Advocacy Coalition, said her organization was pleased with the target of reducing child poverty by 50 per cent. “The stress of poverty is toxic to both parent and child health,” she said.

The quickest way to help is to make sure families have more money, so the recently announced Child Opportunity Benefit is good public policy, she said. “It may not lift very poor people out of poverty, but it will reduce the depth of their poverty.” 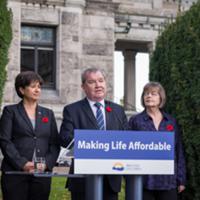 BC Seeks Advice on How to Reduce Poverty

The B.C. Poverty Reduction Coalition called the strategy a strong start but said it leaves gaps. The consultation process identified needs for better access to good food for families, more investment in affordable transportation and improved income security, but those goals have not been met in the strategy, it said.

The BC Green Party said it was consulted on the strategy, which it sees as a “first step” towards reducing poverty.

“The B.C. Green caucus knows that real income security will only come from a more innovative transformation of the income security system to address the challenges and opportunities inherent to a rapidly evolving economy,” it said in a release.

The province also appointed a poverty reduction advisory committee that includes “advocates, experts, Indigenous peoples and people with lived experience from around the province.”

The government is required to report annually on progress it has made towards its targets starting in 2020.