In this report from Dec. 27, Tyee legislative bureau chief Andrew MacLeod looked at the high stakes battle for a seat that could threaten the New Democrats’ hold on government.]

If Tony Harris is successful in his bid to become the next MLA for Nanaimo, he’s unlikely to be in the position for long.

Harris is running for the BC Liberals against the NDP’s Sheila Malcolmson and the Green Party’s Michele Ney in a race where a win for the Liberals would give the party 43 seats in the legislature, matching the NDP’s 40 plus the Greens’ three.

It would change the balance of power in British Columbia and force the speaker — former Liberal MLA Darryl Plecas who now sits as an independent — to break tie votes, a situation many observers say wouldn’t last long.

In his holiday message to BC Liberal supporters, leader Andrew Wilkinson described the byelection as “an uphill battle in a traditional NDP stronghold” that would require “all hands on deck.” However, a spring general election looked more likely than ever, he wrote.

For Harris, the focus on the possible provincial repercussions draws attention away from what matters.

“I think there’s going to be a lot of people trying to distract from what’s really important here, and this is Nanaimo’s time. It’s Nanaimo’s opportunity to have its voice be heard and for us to contemplate what the future looks like for us,” he said.

He said he sees running as an opportunity to do something for his community, a place his family has lived for six generations, and hopes Nanaimo will send a message that voters there think for themselves.

“If Nanaimo doesn’t always vote the same way it will cause all parties to be more interested in Nanaimo in the future, which is good for Nanaimo, and that’s what this is all about for me,” he said.

Over the past 50 years Nanaimo has all but twice voted for NDP candidates. Since 2005 it has been represented by Leonard Krog, who stepped down as MLA in December after winning an election to be the city’s mayor.

Byelections are, however, famously difficult for sitting governments to win, and the NDP is not taking victory for granted. The party has chosen as its candidate Malcolmson who has been the member of parliament representing Nanaimo-Ladysmith in Ottawa since 2015.

“If the premier hadn’t convinced me that there was nobody else that could win the seat and keep this progressive, cooperative government going, then I would have been really happy to be campaigning for someone else provincially, supporting them, and carrying the work on federally,” Malcolmson said.

The NDP government has been in office a year and a half. In that time it has ended a tent city in Nanaimo, added 170 modular housing units, added 120 units with three not-for-profit providers and another 156 units dedicated to seniors, she said.

It’s a record that contrasts well with Justin Trudeau’s federal government, she said. “They’ve had three years already and just have not generated results on the ground in the community.”

Malcolmson, who came to politics via environmental activism and previously served on the Islands Trust council, said she also likes the government’s direction on climate change as set out in its recently announced plan.

“I’m extremely encouraged that the Clean BC offer is so focused on jobs,” she said. “Jobs in the renewable sector are actually much more plentiful than oil, gas and mining across the country and that proportion is probably even higher in B.C.”

Governments need to tell that story, show that there are already many people working in the field, and demonstrate that a better future is possible that will benefit workers and their communities.

Malcolmson said she’ll be reminding people of the overcrowded classrooms, rising homelessness and out-of-control housing prices under the previous BC Liberal government during its 16 years in power.

“We’ll be campaigning hard on what the Liberal record is and being clear about how important this election is,” she said. “The whole province turns on it, so we’re going to work really hard.”

People need to be realistic about what a BC Liberal win would mean, Malcolmson added. “I don’t think the Liberals like to see us working together [with the Greens] to get things done for people. It’s clear they’re going to throw everything they’ve got at winning the byelection.”

Despite the NDP and Green MLAs working together in the legislature, both parties are running candidates in the byelection.

Ney, who retired in July from a teaching career, said voting Green won’t bring down the government, but it will add an opposition voice that helps ensure good decisions are made that benefit people for the long term.

“In my opinion, this is a perfect opportunity for the constituent to actually vote for what they truly want if they follow their conscience, if they follow their heart, and not get swallowed up by fear,” said Ney, whose father Frank was a long-time Nanaimo mayor who briefly served as MLA as well. 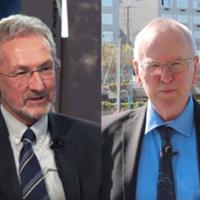 In Nanaimo Race, Everyone Looks Forward to Cleaning Up the ‘Mess’

“I want the job as MLA so that we can start looking at changing and moving toward a new green economy that provides an opportunity for a thriving community and that is in harmony with our environment,” she said.

Being a teacher gave her skills that would be useful in the legislature, she added.

“Excellent communication skills is something you truly need to be a politician,” she said. “You are talking to your constituents always, and of course you’re continually working with your colleagues and opposition in the house, negotiating, working, creating visions for the future, planning and outlining and making objectives, making an action plan and creating outcomes.”

BC Liberal candidate Harris said there’s a need to better combine financial, environmental and social thinking. “I really care about people and I care about our environment and I care how our economy functions,” he said.

“Nanaimo’s growing rapidly and I think the whole mid-Island will continue to grow and we need to be really thoughtful about what the future looks like with respect to our infrastructure investment, health care, how our city lays out and how we position ourselves to serve the Island north of the Malahat because it often gets overlooked.”

Premier John Horgan has six months from when Krog resigned to call the byelection, but has said he wants to have an MLA for Nanaimo in the legislature by mid-February. Candidates are expecting the byelection to be called in early January after the holidays with voting to be held in early February.

When its held, whatever issues the candidates campaign on, ultimately it will be seen as a vote on whether or not the current government should have a chance to continue.