The B.C. government helped kill Greyhound bus service in the province by subsidizing a competitor and denying the company a chance to bid on the contracts, say Greyhound and its union.

Greyhound Canada announced this month that services in the four western provinces will end Oct. 31.

The company cited the falling number of riders in rural communities, the entry of ultra-low-cost carriers, and regulatory constraints.

But it also noted the decision had been promoted by “increased competition from subsidized national and inter-regional passenger transportation services.”

Eric Carr, president of Amalgamated Transit Union Local 1374 which represents 440 workers whose jobs are at risk, says the provincial government’s decision to grant subsidies to one of Greyhound’s competitors in northern B.C. was a final blow that triggered its retreat from the province.

The government has launched several services in northern B.C. BC Transit was charged with providing services along the “Highway of Tears” between Prince George and Prince Rupert, where the RCMP say 18 women have been killed or are missing.

BC Transit contracted with Pacific Western Transportation, a Calgary-based company.

“They are giving money to BC Transit to run between these towns and here and there,” Carr said. “We should have been offered or brought in to be able to bid on those routes, and we weren’t given that opportunity.”

When Greyhound cancelled some northern routes June 1, the government launched BC Bus North and awarded the contract to Pacific Western without a public bidding process.

Peter Hamel, Greyhound’s vice-president for Western Canada, told The Tyee that Greyhound’s main competitors now are the subsidized carriers — BC Transit, the Interior Health Connector and BC Bus North.

As it moved out of non-profitable routes in northern B.C., Greyhound expected the government would hold an open bidding process to find ways to maintain service.

Instead, he said, the government opted to bypass the bidding process and award the contracts to Pacific Western.

“We were very surprised to see that it wasn’t an open competition and it was backfilled with BC Transit, who found another carrier and subsidized that carrier,” Hamel said. “So, our concern was not that there was a carrier coming in here. Our concern was that we didn’t feel it was an open bidding process or fair.”

Greyhound has drivers, other staff and terminals in place, and could have offered a solution if there was an open request for proposals, he said.

“It certainly caught us by surprise,” he said. “That we weren’t part of the conversation to maintain the service, or that it wouldn’t be an open RFP.”

Jonathon Dyck, BC Transit communications manager, said the government asked the Crown corporation in May to launch an interim service to fill the gap between Greyhound’s shutdown of some northern routes and the launch of BC Bus North.

“Pacific Western Transportation already operates long-haul services for other organizations in northern B.C., understands the area, and were able to support us with fleet and staffing requirements to launch within a reasonable timeframe,” said Dyck.

The service needed to be in place quickly, Dyck said, so the contract for an interim 12-month solution was awarded directly to Pacific Western Transportation. This guaranteed the service while providing the government with time to evaluate a longer-term solution.

Transportation Minister Claire Trevena directed BC Transit to provide the $2 million service within its existing operating budget. Katie Robb, transportation ministry communications director, said this was achieved by amending an existing agreement between BC Transit and Pacific Western Transportation.

Hamel said Greyhound has been promoting the idea of a “Connecting Community Fund” to the federal transport minister to support rural service. 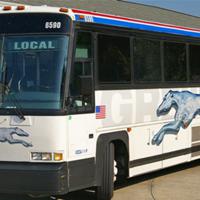 The proposal, based on a similar U.S. program, would see the federal government allocate money to the provinces to use in meeting essential transportation needs in rural communities.

The fund could allow private transport companies to receive subsidies to cover the costs of non-profitable routes, Hamel said.

Trevena has said that the cancellation will hurt rural communities, particularly vulnerable individuals.