The British Columbia government’s direction on Indigenous housing is positive, but more details are needed on where and when the funding will be available, says the head of the Aboriginal Housing Management Association.

“I think we’re completely excited about where things are going,” said AHMA CEO Margaret Pfoh. “It’s the first time in history that a province has taken the initiative to address the [housing] needs of Indigenous peoples no matter where they’re at.”

Robinson said the government hopes to have 1,000 of the units approved within a year and that the funding will be available for projects throughout the province, including on reserves, where housing has been a federal responsibility.

“We have to take a step here and really focus on housing for people, for Indigenous people, in the communities where they live, make their homes, where they’re born, where they’re connected, where their families are,” she said. “We believe, and our government believes, people don’t exist in vacuums, they exist in communities.”

The AHMA is the umbrella group for 42 housing providers that manage a total of 4,200 units, with more on the way. Most are for the 70 to 80 per cent of people who live in urban, rural and northern communities, though Pfoh said four of the members work with partners on reserves.

“I think it’s fantastic to take this initiative to meet the needs of Indigenous peoples both in the First Nations communities and in urban, rural and northern areas,” Pfoh said.

“I do have a number of concerns though. We’re yet to see how that number breaks down into the 1,750 units,” she said. “To date we haven’t received any specifics as in how many dollars and how many units are going to roll out this year, next year, and into the coming 10-year strategy.”

Nor is it clear how the number of units was chosen, she said. “I think 1,750 really comes down to a basic formula of budget availability and budget planning. I’m not sure that it’s really driven by a true need and demand study, but we’ll see.”

While the government’s announcement last week talked about women and supportive housing, which is important, there’s also a need for projects targeted to youth, especially those aging out of government foster care, a system where Indigenous people are significantly over represented, she said. 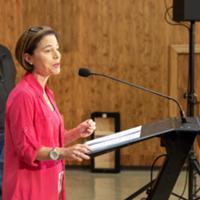 BC to Fund On-Reserve Housing in Groundbreaking Plan

“We can’t afford to neglect our youth,” she said, adding that the Indigenous population is growing four times faster than the rest of the population and before long will make up 20 per cent of the labour force. “If we don’t provide the basics of shelter, how can our youth meet the self actualization that they need to be strong and healthy into the future?”

Some AHMA members provide housing that mixes units for elders and youth, providing young people aging out of care a chance to live somewhere where they can connect with community, she said.

There’s no question there’s great need considering one out of 15 Indigenous people living in urban centres are homeless, Pfoh said.

Vancouver’s most recent count found 40 per cent of people who were homeless were Indigenous, despite Indigenous people only making up about 2.2 per cent of the city’s population.

Pfoh said she’d met with officials from BC Housing on Monday and was encouraged that AHMA will be involved in developing the request for proposals. “If there’s going to be a solution it needs to be driven by and for Indigenous people.”