The upcoming phase of Vancouver’s Broadway subway is now estimated to cost $2.83 billion, up from the 2015 estimate of $1.98 billion (which, in today’s dollars, would be $2.28 billion). This stretch of Broadway on the city’s west side is packed with medical offices and is the region’s second-largest centre of jobs after downtown.

These estimates are for phase two of the 10-Year Vision for Metro Vancouver Transportation. The phase is estimated to cost $7.3 billion, and includes more express bus service and planning for future projects, such as rapid transit to UBC, a Surrey-Langley light rail line and a potential Burnaby Mountain gondola.

Rapid transit to UBC is a hope of many, including the university, which is exploring a land or financial contribution to the project.

The most popular option for rapid transit to UBC is extending the Broadway subway beyond this phase’s terminus at Arbutus Street.

If that becomes a reality, UBC urban design professor Patrick Condon says the Broadway subway to campus will have a price tag of $6.7 billion dollars. His estimate is based on the $2.83 billion for the 5.1 kilometres of this phase of the subway between VCC-Clark and Arbutus.

That $6.7 billion is the current estimate. By the time work on a possible subway to UBC begins, “it’ll certainly cost more by then,” Condon said.

Condon says the subway isn’t a good investment because Vancouver’s Millennium Line uses cars that are two-thirds the width of a “normal” subway car. The system isn’t currently being installed anywhere else in the world, and the only other Canadian version of this system is the Scarborough RT, which is soon to close. (Condon recently wrote about this for The Tyee.)

“Just the $800 million increase in costs for the Broadway subway, long anticipated, would be enough for a surface rail all the way from Commercial Drive to UBC,” he said.

As for the investment in Surrey light rail, Condon is in favour as it’ll make push the auto-centric city into one that’s more transit-oriented and more walkable, but says “it’s seriously crippled by the cost per kilometre.” 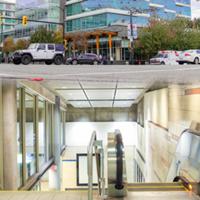 In 2012, Condon and researcher Kathryn Mandell found that the estimated cost for light rail in Vancouver costs three times that of similar projects in the U.S. and Europe.

For this phase of transit projects, the federal government is funding $2.01 billion. B.C. is providing $2.55 billion.

As for the remaining $2.64 billion of the phase’s $7.3-billiion cost estimate, money will come from TransLink and other regional government resources such as borrowing and private financing, a number of taxes including property taxes and increases to transit fares, beginning in 2020.

This investment plan is pending approval by TransLink’s mayors’ council and board of directors in June.

If approved, you can expect to ride Surrey’s light rail in 2024 and Broadway’s subway in 2025.

With files from Jess Mackie.