As the B.C. government works on child-care plans advocates and those in the sector are waiting to see what education levels will be required of workers and what they will be paid.

Last month’s throne speech promised $1 billion for a universal child-care program over the next three years, with $136 million earmarked for training and increasing wages for early childhood educators.

But there were no specifics as to what level of education the province would require or the wages that would be paid, critical factors for operators, potential employees and the system.

The NDP campaigned last spring on implementing the $10 A Day Plan championed by the Coalition of Child Care Advocates of BC . But the government has not said whether it will follow the plan’s recommendation that all educators be required to have a diploma and, eventually, a bachelors’ degree in early childhood education.

Current standards require a less comprehensive certificate program which, at Douglas College requires a year of course. The diploma requirement would add an extra semester.

No one from the Ministry of Children and Family Development would be interviewed on the topic, but in an emailed statement a spokesperson wrote that in the coming months “we will work in partnership with the sector to create a workforce development strategy.” The strategy will include “a comprehensive look” at education and training for early childhood educators and “examine minimum entry to practice standards and qualifications.”

But early childhood educators and academics agree that the government should require a diploma and eventually a bachelors’ degree.

“A certification and a diploma are both inadequate for a teacher,” said Kathleen Kummen, chair of Innovation and Inquiry in Childhood Studies at Capilano University, which offers the only early childhood education bachelor program in the province.

“A kindergarten teacher requires a four-year bachelor degree plus a one-year professional development program to teach. Yet with a four-year-old, the minimum requirements are one early childhood educator with a 10-month certificate.”

Current early childhood educators with certificates could be grandfathered into the new program with opportunities to upgrade their qualifications, Kummen and others suggested.

But increased educational requirements typically mean higher pay. And with an average wage under $20 an hour, upgrading costs would be a big deterrent for people already working in early childhood education.

Which raises the question of which should come first, the higher standards or the higher pay.

The assistant program was meant to give those pursuing a certificate more experience, but that’s not always why pre-schools hire them, says Emily Mlieczko, executive director of the Early Childhood Educators of BC, an advocacy organization for early childhood educators.

“We’re finding less and less qualified people within the programs that are delivering the services just because the need is so great,” she said.

“Or we’ll also find that the employer or the boards that are running these programs don’t understand the implications of that and will even look for people with lesser qualifications because it’s a place where they can reduce their expenses because they don’t have to pay those people as much as their qualified educators.”

Although the government has not yet decided what qualifications will be required, the Ministry of Advanced Education, Skills and Training has allocated $7.4 million over three years to create up to 620 new early childhood education training spots. It’s also allocating $16.3 million from recently announced federal government child-care funding for early childhood education bursaries.

While the society already works with Early Childhood Educators of BC to increase their members’ cultural safety and competency regarding Indigenous history, culture and current issues, it wants educators working in First Nations’ early childhood centres to have additional training and competencies.

These range from delivering culturally appropriate curriculum that includes local First Nations language, protocol and customs to consulting with elders when kids or their families are in stress.

The majority of early childhood educators in the province are probably from a middle class background and not recent immigrants or Indigenous people, says Guofang Li, a University of British Columbia professor and Canada Research Chair in Transnational/Global Perspectives of Language and Literacy Education of Children and Youth. Educators should have additional training in working with low-income, immigrant, refugee and Indigenous kids and their families.

“To be able to have that mindset that understands the needs of those families and the needs of children [whose] background is different from their own is an important quality,” Li said.

“Early childhood educators need to have that close relationship with families, and having that understanding and mindset will help them better communicate with parents about what they do in school and how they do it. Understanding students from different backgrounds is very important.”

But the early childhood education system isn’t currently attracting and retaining qualified professionals at an average wage of $18.72 an hour, according to the most recently available numbers from 2009. That’s why the $10 A Day Plan calls for an average hourly wage of $25 plus benefits.

But what should happen first: the wage increase or the higher qualification requirements? 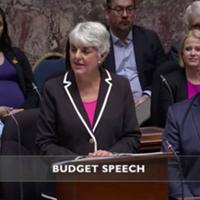 Mlieczko of the Early Childhood Educators of BC says the wage and qualifications increase should happen at the same time. “We need to see how many people can come back into this field that have their certification, because the people that have left just because they can’t afford to raise their own families, and some of them are the most amazing educators out there.”

Li say the money has to come first in order to attract more professionals to the field.

But Kummen says it’s more complicated than which one comes first.

“We have a degree program: as our students are graduating they are being hired by early childhood programs that pay more, they are demanding more money, and salaries are raising,” she said. “So I think that probably it’s a bit of both.”