The provincial government’s $1 billion plus investment into a universal early childhood education program over three years is everything child care advocates hoped for.

“Although it only gets us part way to where we need to be in terms of $1.5 billion [annual funding] in about eight years from now, the dollars that they have invested have been targeted towards lower-income families as we recommended.”

But that doesn’t mean that everyone will have equal access to the child care services they need. At least not initially, due to a variety of factors including a shortage of available child care spaces.

“There is going to be some frustration in the short term and we’re going to need to encourage patience among parents, while we simultaneously, groups like Generation Squeeze and the Coalition of Child Care Advocates [of BC], urge the government to implement the system as fast as possible,” Kershaw said. “Knowing that it takes time to attract a range of people with qualifications to provide excellent early childhood education.”

Some of the most frustrated families will be lower income, Kershaw added, as middle to upper-income families tend to be more successful at finding available spaces or getting to the top of waitlists.

“That is one dynamic that we’re going to need to be mindful of. But happily the budget is already trying to counter that by disproportionately allocating the investment toward lower-income households,” he said.

Zahra Jimale, director of law reform at West Coast Legal Education and Action Fund, said universal programs by their nature exclude marginalized communities, including women fleeing domestic violence or those who lack legal immigration status, because their particular needs are overlooked. It may sound counterintuitive, she added, but any successful child care system must be a diverse and targeted universal system.

“Essentially the idea is that marginalized communities would be given priorities, and because what they have done with the budget, paying attention to, for example, low-income communities, they have taken that step, which we’re very happy with,” Jimale said.

“But obviously we’re not there, yet. We don’t have a universal child care system yet.”

“Income is a significant aspect in terms of accessing child care, but there are other elements,” she said. 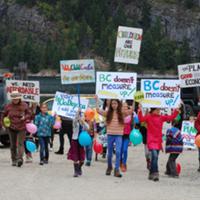 How the Fight for Child Care Was Won

Culturally appropriate care, particularly for Indigenous communities, is another element that needs focus, advocates say. The BC Aboriginal Child Care Society said in a Feb. 22 press release it’s heartened by the budget’s acknowledgment of the importance of community-driven Indigenous child care and early learning services.

“We look forward to working with the provincial government and First Nations leadership to ensure that new funding for Indigenous child care and learning support will be substantial, and supportive of the self-determination of Indigenous authorities, families and organizations who understand how and where the most impact can be made for their communities,” read a statement from Mary Teegee, president of the society’s board.

But no one The Tyee spoke to believes the weaknesses in the system are enough to dismiss the overall value provided by universal early childhood education. They say barriers should be identified as the system is developed.

Government should be “creating a system that incorporates accountability and monitoring,” Jimale said. “Being aware of these risks and making sure that there are systems in place to make sure these gaps are addressed, and actually providing for a diverse system within the universal system that addresses the specific needs of these families.”