“It seems like a bit of a gap to not at least try and attach some numbers to it,” he said. “That’s generally their mandate.”

In the 118-page report Managing Climate Change Risks: An Independent Audit, the Auditor General’s office found, “Climate change poses economic, environmental and social threats to British Columbia. The impacts of climate change are already being felt in the province and will likely increase in severity.”

The province has already seen average temperatures rise 1.4 degrees Celsius between 1900 and 2013, but isn’t doing its part to reduce its own carbon emissions, the report said.

“Overall, we found the B.C. government is not adequately managing the risks posed by climate change,” it said. “It is very likely that B.C. will not meet its 2020 emissions reduction target of 33 [per cent] below 2007 levels, and models suggest the province is not on track to meet the 2050 target.”

Potential impacts to the province include an increase in extreme weather events, more frequent and severe heat waves, higher risk of wildfires and rising sea levels, the report said.

But when it came to estimating the costs of those impacts, it merely said they would be “high” and that the cost of adapting to climate change “can be quite significant.” It quoted a 2011 report from the now disbanded National Round Table on the Environment and the Economy that estimated the cost of some impacts of climate change will rise from $5 billion a year in 2020 to as much as $43 billion annually by 2050.

It gave the previously published example of the estimated $9.5 billion it would cost to prepare for higher sea levels in Metro Vancouver and on the shore of the Fraser River. “In comparison, a major Fraser River flood could cost between $19.3 and $22.9 billion,” the report noted. “Plus, the chances of flooding in that area will continue to go up. There could be many floods, multiplying the cost of repair.”

The report did not, however, attempt to tally what the impacts of climate change could cost the province, nor did it recommend the government do that work.

Its recommendations did include undertaking a province-wide risk assessment and creating an adaptation plan for the province.

Gage said the B.C. government will need a much better idea of what climate change is likely to cost as it puts together future budgets.

And the government should consider looking to fossil fuel companies to cover some of those costs, he said.

For a little more than a year, WCEL has been encouraging municipal governments in B.C. to write to the 20 largest oil and gas companies and begin a discussion about who should pay for the impacts of climate change, a movement that could later lead to legal action.

“We’re looking for the oil and gas companies to pay a fair share of the costs,” Gage said. “They’ve played a major role in creating this problem.”

So far, five local governments in B.C., all of them on Vancouver Island, have sent such letters. The most recent is View Royal, which is in the company of Victoria and Saanich. “It took a while to get the momentum,” Gage said. “I think there’ll be a lot more in the coming months.”

Several large cities in the United States have launched lawsuits against big oil companies. A lawsuit filed by New York City in January named BP, Chevron, Conoco Phillips, Exxon Mobil and Royal Dutch Shell, saying they “were aware for years that burning fossil fuels caused climate change but hid the conclusions of their own scientists,” the New York Times reported.

“[The lawsuit] says that the city has spent billions of dollars and will spend billions more to deal with the consequences of climate change, such as the effects of Sandy, and it seeks to hold the companies responsible for those costs,” the Times reported. Hurricane Sandy did an estimated $65 billion in damage in the U.S. in 2012.

Support is building for similar action in B.C., Gage said. “I hope we manage to get municipalities talking about a class action lawsuit against fossil fuel companies and following the example of New York City sooner rather than later.”

Should the provincial government be taking a similar step? “It’s a good question and certainly something I think the province should be thinking about,” Gage answered.

“If fossil fuel companies don’t have to pay, they’ll have no incentive to stop standing in the way of climate change action and start investing in renewable energy and a sustainable future,” he added. 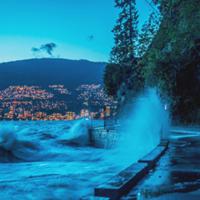 “I’m aware a number of municipalities are looking at that approach,” Heyman said. “I’m interested in anything municipalities undertake to protect the people they represent. I know that other jurisdictions have looked at this as well. I’ll be following it with interest.”

For the province, however, the government isn’t discussing the possibility of similar action and is instead focusing on putting together a comprehensive climate plan, he said.

Responding to the auditor general’s report last week, Heyman said in a written statement, “We agree with the auditor general's report that stronger action must be taken to both adapt to and mitigate the impacts of climate change.”

Citing last year’s record wildfire season, he said, “We expect to see more impacts from extreme weather in the future and we must do whatever we can to prepare for the effects of climate change.”