The British Columbia government is moving ahead with a large multi-year contract to provide computer services to all health authorities, despite a campaign pledge to change procurement policies to give B.C. businesses a shot at such contracts.

But the government has paused the process to award a similar contract for computer services in all central government ministries while it reviews its policies.

“The ministry is in the process of looking at the way procurement is done, which includes government contracts for goods and services, to ensure that we create good-paying jobs for people in every corner of the province,” said an emailed statement from the ministry of citizens’ services.

“A key mandate of the Ministry of Citizens’ Services is to ensure that government IT and software development procurement work better for companies that hire locally and have a local supply chain.”

The review is in line with commitments the NDP made ahead of last year’s election.

“We need to do a better job in our procurement efforts,” John Horgan said a few months before he became premier. “One way we can do that is by reducing the size of the contracts and allowing smaller companies to bid on those contracts.”

The government had been favouring big multinational firms for information technology contracts, Horgan said. “We’ve been shutting out B.C. companies... and that has not given us better outcomes. In fact it’s given us large cost overruns over longer periods of time.”

When the NDP took power in July, the procurement processes for two large contracts were already underway. In both cases, the incumbent was international computing giant IBM Canada.

One of those processes was for a “Workplace Technology Services Procurement” contract that included providing and supporting computers, other devices, software and call centres for the core government. The existing contract for that work is held by ISM Canada, a subsidiary of IBM.

That process has been paused, according to the citizens’ services ministry.

“While we consider the next steps to improving the procurement process, the decision was made to cancel procurement for the workstation contract and extend the contract with the current supplier for one year.”

However, at the same time, a Ministry of Health procurement process for a similar contract to provide workplace technology services to the province’s health authorities and other health organizations has continued.

In that case, according to a January update for health authority staff, NTT Data Canada Inc. had been chosen as the successful proponent. IBM Canada Ltd., which had been providing the service under an earlier contract, was named as the “vendor-in-waiting.”

Headquartered in Japan, NTT Data provides services in 40 countries and had over $19 billion Canadian in sales in 2017.

A due diligence process was to begin in January, followed by contract negotiation, finalization and transition to start late in 2018 or early in 2019.

A health ministry spokesperson said there would be no comment on the procurement process while it was underway.

However a source familiar with the situation noted the contract with health authorities runs counter to the NDP’s campaign promises. 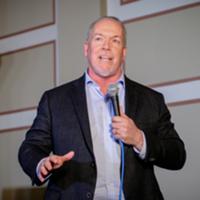 “In their technology platform the BC NDP pledged an end to multi-million dollar contracts with international corporations outside of B.C., yet they are about to award a multi-million dollar health IT contract to a technology company with its roots in Japan that have virtually no presence in B.C.,” said the source, who commented on the condition of anonymity.

Another option would be to bring the work back in house, the source said. “When Desktop IT was directly controlled by government and individual health authorities there wasn’t a profit requirement from every worker doing their job on top of hardware and software sales,” the source said.

“Multinational companies answer to shareholders who must provide profit for each quarter. Their goal is to make money first, and fulfill their contractual obligations second.”

Ahead of the election, the NDP released an Energizing BC Tech strategy that said government IT projects had gone $350 million over budget in 2015 alone and promised to put a cap on the size and length of contracts the government would enter.