A small pilot study by researchers from the Université de Montréal has raised red flags about pregnant women’s exposure to benzene in intensely fracked areas of northeastern B.C.

The study found that the median level of muconic acid in urine samples from 29 pregnant women in the region was 3.5 times higher than the general Canadian population. Muconic acid is a common bio-marker of benzene exposure.

“Prenatal exposure to low environmental levels of benzene or a mixture of organic solvents has been associated with reduced birth weight, increased risk of childhood leukemia and birth defects such as cleft palate and spina bifida,” the researchers note.

Benzene is also one of many contaminants that can be emitted during drilling, fracking or flaring of waste gas from thousands of oil and gas sites.

But Marc-Andre Verner, a toxicologist and professor at the Université de Montréal Public Health Research Institute (IRSPUM), hastened to add that the study wasn’t designed to locate the source of the benzene.

“There is a red flag being raised here,” he said, but it “remains unknown” whether the study results can be attributed to benzene emissions from oil and gas activity in the region.

He also warned that muconic acid in the urine can also originate from the degradation of sorbic acid, a common preservative used in highly processed foods.

The study concluded more research is needed to assess the health risks to pregnant women from fracking.

“Given the documented health effects of benzene, especially those occurring through in utero exposure, and the growing hydraulic fracturing industry in this region, this first biomonitoring initiative certainly highlights the need of further research to better delineate associated health risks,” researchers said.

Verner and a post-doctoral student decided to do the study after a member of the West Moberly First Nation raised concerns about the public health impacts of heavy fracking at a national toxicology conference several years ago. Participants were recruited from clinics in Chetwynd and Dawson Creek.

Nearly half of the participants in the study were Indigenous women who live closest to oil and gas activity in the region.

Verner and his team have applied for funding to do a larger study with 100 pregnant women that would measure volatile organic compounds and heavy metals in air and drinking water in addition to bio-markers.

In the meantime Élyse Caron-Beaudoin, a post-doctoral student who participated in the research, plans to examine the medical records of 6,000 babies born in the last 10 years.

In the last decade thousands of shale gas wells in the region have been subjected to the brute force technology of hydraulic fracturing in order to wrest natural gas liquids (butane and pentanes) and methane from the Montney and other unconventional shale formations in northern B.C.

Other studies have identified concerns about the public health risks of fracking.

In Pavillion, Wyoming, a region of intense hydraulic fracturing activity, researchers have detected elevated benzene concentrations in air near homes located close to well pads. They have also found high muconic levels in urine as a result of benzene exposure.

Benzene, a colourless gas that can cause cancer, is just one of hundreds of toxic chemicals that can be emitted at shale gas drilling and fracking sites. Many oil and gas workers are routinely exposed to the deadly carcinogen.

For years public health researchers have been raising red flags about chemicals emitted by hydraulic fracturing and flaring.

More than 90 per cent of new wells require fracking. The brute force technology blasts large volumes of water, chemicals and sand up to three kilometres below the surface to crack open hydrocarbon-bearing rock. The operation can industrialize rural communities with truck traffic, noise, holding ponds and air pollution.

In 2015 researchers at Johns Hopkins University reviewed the records of nearly 11,000 births between 2009 and 2013 in heavily fracked rural areas of north and central Pennsylvania. 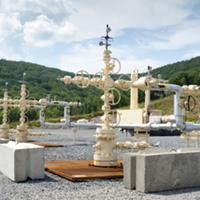 The researchers discovered that expectant mothers living in the busiest areas of shale gas activity were 40 per cent more likely to give birth prematurely (before 37 weeks of gestation).

In addition women were thirty per cent more likely to have a “high risk pregnancy” in heavily fracked landscapes.

And in 2014 as U.S. federal study found that pollution from the mining of natural gas in rural areas can increase the incidence of congenital heart defects among babies born to mothers living close to well sites.

More than 17 organizations, including the Canadian Centre for Policy Alternatives, have called for a public inquiry on hydraulic fracturing in B.C. due to concerns about methane leaks, groundwater contamination, large water withdrawals and fragmentation of First Nation land.

The shale gas industry has triggered thousands of mini-earthquakes along with significant tremors and changed seismic patterns in the region.

Seismic hazard experts have called for better regulations and no-go zones to protect public infrastructure in the region such as dams.