When Premier John Horgan was asked whether the government’s review of BC Ferries would include restructuring the company, he was quick to say “everything’s on the table.”

The union representing ferry workers hopes that means the government will consider returning the company to closer public control.

“Ferries are a key component of our transportation infrastructure, particularly for the 750,000 people that live in coastal British Columbia or on islands here in B.C.,” Horgan said Saturday. “As a premier from Vancouver Island, I think I have a better appreciation than previous premiers of the importance of the ferry system. We’re going to make sure it’s fair for everybody.”

Asked if the review would include BC Ferries’ corporate structure, Horgan said, “Everything’s on the table. We want to make sure we’re making choices and decisions that are in the best interests of British Columbians.”

BC Ferries was a Crown corporation up until 2003 when the BC Liberal government restructured it to create a private company in which the provincial government is the single shareholder.

The NDP while in Opposition criticized the corporate structure. In the 2005 election, the party pledged to make BC Ferries a Crown corporation again, while the 2009 platform talked about “ending the privatization of BC Ferries.”

Changing the corporate structure of BC Ferries wasn’t mentioned in the 2017 platform, which did promise to “conduct a review of BC Ferries cost structures.” The NDP would also freeze fares on the major routes, cut them by 15 per cent on the secondary routes and restore free passenger fares for seniors from Mondays to Thursdays, it said.

The president of the BC Ferry and Marine Workers’ Union, Graeme Johnston, said he welcomes the review and hopes the government examines BC Ferries’ structure.

“They’ll have to make a determination whether the current model is a fit for their vision of BC Ferries,” Johnston said, adding the union is clear what it hopes the government will do. “We believe BC Ferries is best run as a utility in the interests of the people of the province and not as a private company.”

If BC Ferries continues to operate as a private company, it will keep affecting the character of the service it provides, he said. “I think the governance model is what’s going to dictate what the outcomes are.”

BC Ferries spokesperson Deborah Marshall said the company welcomes the government’s review. “There’ve been many reviews done on BC Ferries in the past and we’re happy to work with them.”

Ahead of the review, in October, BC Ferries restructured its executive team, a change flagged on its website. As of Tuesday it said, “Updates are pending. Stay tuned!”

Union president Johnston said the restructuring takes the corporation in the opposite direction from where he hopes the government will go. “I think the management changes, the structural changes, are now pointed towards focusing on the ferry rider as a customer and consumer and less focused on BC Ferries as a utility for transporting people around British Columbia.”

Transportation and Infrastructure Minister Claire Trevena said Monday that the review, which isn’t yet underway but will be soon, will focus on BC Ferries’ operations, not its governance. 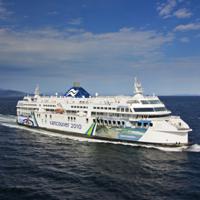 She said many people trace the rise in fares and concerns with operations to the 2003 restructuring, but said that’s not the government’s current focus. “We’ll be looking at a number of areas that may impinge on that, but it’s not going to be a governance review, it is an operations review.”

The main goal is to reduce fares and make sure the service is running appropriately, she said. “We want to make sure that it’s affordable for people and it’s a service that works. Those are our core commitments.”

That’s in line with Horgan’s mandate letter to Trevena, which says he expects her to “Work with BC Ferries to freeze and reduce fares, and reinstate the senior’s weekday 100 per cent discount, while conducting a comprehensive operating review.”

Horgan has highlighted the government’s plans to make BC Ferries more affordable in several recent speeches. On Friday, Nov. 3 at the NDP convention in Victoria, he said, “As much as I enjoyed removing the tolls on the Port Mann and Golden Ears bridges to make life more affordable for people in the Lower Mainland, I am very excited about trying to make life a little bit better for people on Vancouver Island as well.”

Johnston said he’s optimistic the review will point the government in the direction it needs to go. “We look forward to the outcome of their review and we look forward to working with the province and BC Ferries to make sure the review comes up with the right conclusions,” he said.