Mismanagement, politically motivated decision-making and lack of transparency have dogged BC Hydro’s support for the Site C dam, says a new report submitted to the BC Utilities Commission by the former CEO of BC Hydro.

The project is already over budget, more big cost overruns are coming and BC Hydro’s demand forecasts justifying the project are overstated, Marc Eliesen warns in his second submission to the BCUC panel reviewing the megaproject.

“Site C must be cancelled to ensure that the B.C. ratepayers are not left with an unconscionable burden of significant electricity rate increases that will cause major economic harm to families and businesses throughout the province,” Eliesen says.

The province has asked the commission to review the economics of the problem-plagued project and its impact on ratepayers. It has been asked to examine the impact of killing the project and remediating the site; postponing work to some future date; or continuing with construction. It does not have a mandate to to examine the dam’s impact on First Nations rights, the environment or agriculture.

Eliesen notes that BC Hydro told the commission on Aug. 30 that it expected “to complete Site C on time and on budget, and we have the appropriate level of schedule and cost contingency.”

But five weeks later it presented a different and grimmer picture.

Chris O’Riley, BC Hydro president and chief operating officer, informed the commission on Oct. 4 that “BC Hydro has encountered some geotechnical and construction challenges on the project.”

“We will not be able to meet the current timeline for river diversion in 2019,” he said. That would mean a delay of a year as the work has to be done in a one-month window in the fall when Peace River levels are low.

O’Riley said the delay would add $610 million to the project’s cost, a seven-per-cent overrun. The original budget, including funding for contingencies, was $8.8 billion.

“It is hard to fathom how senior management at BC Hydro could be caught unaware,” says Eliesen, who warns overruns could run into the billions.

In his first critical submission to the BCUC, Eilsen argued that BC Hydro’s load forecast suffered from systemic bias and that Site C would not be completed on time and on budget.

Since then two technical reports on the project prepared for the commission by Deloitte LLP have confirmed the project is at risk of delays and cost overruns and questioned BC Hydro’s demand forecasts.

Eliesen’s latest submission argues that BC Hydro has not been transparent about the project and its burgeoning costs.

Eliesen also says the commission should address limits in its terms of reference that say it must follow “the energy objectives set out in the Clean Energy Act.” Premier John Horgan, then the NDP energy critic opposed when it was introduced in 2010. That controversial bill exempted the Site C dam from review by the BCUC and barred BC Hydro from including the gas-fired Burrard Generating Station from its Integrated Resource Planning.

The commission’s mandate means it cannot consider existing electricity supply possibilities from the Burrard Generating Station or supply from B.C.’s entitlement under the Columbia River Treaty, Eliesen says. Each could supply power roughly equivalent to Site C’s output, he says.

Under the Columbia River Treaty B.C. gets a half-share of downstream power production, which in recent years has averaged 1,320 megawatts capacity or about 11 per cent of BC Hydro’s capacity. The government has chosen to sell much of the power outside the province.

The Burrard Station, with a similar capacity to Site C, was operated by BC Hydro in Port Moody as a standby plant to provide emergency power or electricity during periods of peak demand.

The natural gas powered plant cost BC Hydro about $20 million a year to operate until it was shut down in 2016.

“If the Burrard Generating Station had not been removed from BC Hydro’s Integrated Resource Plan there would be no need for the commission’s inquiry,” writes Eliesen. “There would have been no scenario upon which the construction of Site C could have been justified.” 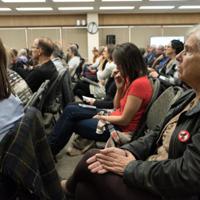 Surprised to be Heard: Presenters at Site C Inquiry Find Their Voice 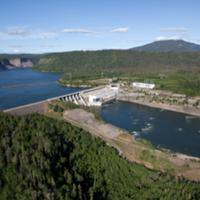 Eliesen says the commission must assess the energy available from Burrard as well as the province’s entitlement under the Columbia River Treaty in its final report.

“The need to cancel Site C can be established without regard to Burrard or the Columbia River Treaty, but there is no practical public policy or prudent business reason for excluding these viable options from the slate of alternatives to Site C,” he says.

Eliesen also notes that BC Hydro’s aggressive schedule to complete the dam by 2023 has not been based on prudent management or cost considerations.

“The accelerated schedule appears to be based on a politically motivated objective of the previous government— to reach a ‘point of no return’ by mid-2017,” he says. “BC Hydro has failed to do so which has led to significant cost overruns.”

The rush to build the project has also contributed to major problems between BC Hydro management and its main contractor, Peace River Hydro Partners.

Calgary-based Petrowest Corp., one of three major contractors in the consortium, went into receivership in August.

How did BC Hydro qualify its contractors, asks Eliesen, noting questions had been raised earlier about Petrowest’s finances.

“This evidence shows that BC Hydro is derelict in its due diligence duties with respect to contractor vetting.” says Eliesen in his report.

“It is illusionary to believe that Site C will adhere to a 2024 in-service date and remain in the ‘moderate’ scenario of a 10- to 20-per-cent increase in cost,” says Eliesen.

“It is highly likely, based on BC Hydro’s performance, that Site C will reach a cost of $12 billion by the time the project is complete.”