The organization responsible for some 25 historic railway cars to be evicted from a New Westminster warehouse would like Premier John Horgan to get involved.

The warehouse belongs to a numbered company affiliated with the British Columbia Investment Management Corporation, a Crown corporation that manages the pension funds of public servants, including teachers, police officers, firefighters and municipal and provincial government employees.

“All it would take is a phone call from Horgan to the chairman of the bcIMC and all of this would be put in a quiet state of mind,” said Terry Fergusson, the treasurer of the National Railway Historical Society.

Horgan said Wednesday he was unaware of the situation but that his office would look into it.

The numbered company 2725321 Canada Inc. and the NRHS were in the Supreme Court of B.C. on Oct. 3 for a hearing on a civil claim the company filed in August 2016 seeking to force the removal of the passenger cars, freight cars, an engine and other property from a giant warehouse at 109 Braid St.

The railway cars had been in the warehouse for at least three decades, and Richard DeFilippi, the lawyer acting for the property owner, said the property managers had been “taking steps or trying to take steps with regards to the rail cars since as early as 2000.”

In the notice of civil claim, the landowner asked the court that if the society fails to remove its property, that it be allowed to sell that property to cover the relocation costs. DeFilippi said he understands the railway cars can be removed using a crane to load them onto flatbed trucks.

The property was formerly a Woodward’s warehouse and has been owned by the numbered company since the mid-1990s. It is managed by QuadReal Property Group, a company the bcIMC launched in 2016 to manage its real estate investments. The main tenant is internet giant Amazon. 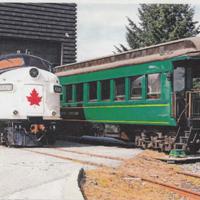 The judge's written order is not yet available, and the two sides had different interpretations of it.

“The court made the order sought by the owner, but gave the railway historical society 90 days to remove the railcars on their own, which I believe the society was pleased with,” said Lesli Boldt, a spokesperson for QuadReal.

“My client will continue to work with the society for the expeditious relocation of the rail cars,” she said.

Fergusson said the NRHS was glad to have won access to the property and will be able to remove four of the cars if a switch is restored. “We have 90 days to see something leave,” he said, noting the Jan. 1, 2018 deadline. “It’s a shame to lose stuff, [but] we don’t mind sharing this equipment, preferably to the right location.”

He said a switch that was disabled four years ago by the owner of the track to the warehouse would need to be repaired. “This is one of those wild cards out there that is not understood,” he said. “We’re definitely stranded on an island. It’s a ghastly situation to be in.”