The BC Green Party stands to see the biggest gain from proposed changes to political financing, but the NDP will be left with the most money to spend each year under the new rules.

The Election Amendment Act introduced in the legislature Monday will ban corporate and union donations to political parties while capping individual donations at $1,200 per year.

The new law will end the BC Liberal Party’s fundraising advantage and likely leave the NDP, which receives a greater number of small individual donations than the other parties, with a financial advantage over its competitors.

The bill also provides for five years of transitional public funding for political parties and reimbursement of 50 per cent of allowable election expenses.

The government says it will remove $65 million in donations from B.C. politics over five years, providing about $30 million in public funding to the parties.

Based on 2016 donations, the new limits and public subsidy would leave the NDP with about $5.8 million to spend each year, the Liberals with $4.9 million and the Greens with $1.6 million.

Each party could also get up to about $4.35 million to cover campaign costs in the next election if the party has a full slate of 87 candidates and spends the maximum allowed.

Green Party Leader Andrew Weaver said public funding for political parties wasn’t his party’s idea, though he supported the plan. “All I can say is we didn’t push for the subsidies,” Weaver said. “We didn’t bring subsidies to the table.”

“It’s always alternate facts with the premier,” he said in February. “In one of her distortions last week she said my preference was for taxpayers to pay for political parties. That is just not the case.”

On Tuesday Horgan acknowledged that his position had changed, but said the important thing was the ban on big money.

The NDP realized “over time” that the transitional funding was necessary, he said. “The per vote subsidy is the foundation of electoral finance reform change across Canada,” he said. “We rejected pure public financing, we rejected that, and instead we put in place a transition fund that will decline year over year and will no longer exist at the end of this parliament.”

Horgan said large donations were distorting politics in the province. “This legislation is the most significant legislation we’ve seen in British Columbia since 1871.... It’s a modest cost to taxpayers in the grand scheme of things.”

“Before the election campaign, I heard in every corner of this province that the influence of big money, union and corporate donations, had to stop and when this legislation passes it will,” he said.

The bill’s provisions will likely cause the largest loss to the BC Liberal Party, which in recent years has received far more, far larger donations than the others.

In 2016 the BC Liberals collected $8.4 million in donations that would be prohibited under the new rules, most of it from corporations. They also received 399 donations that exceeded $1,200, five of which were for $100,000 each. About $1.75 million came from individuals whose contributions would have exceeded the new cap.

In total, if the new rules had been in place in 2016 the Liberals would have been unable to accept about $10.15 million in contributions — about three-quarters of the party’s take.

After adding back the $1.99 million the party stands to get from the per vote subsidy, it would have about $8.16 million less each year. That would leave it with $4.9 million to spend.

The NDP, on the other hand, will come out close to even under the new rules. In 2016, while in opposition, the party collected about $2.3 million in donations that would no longer be allowed, the bulk of those from unions.

The party also had 86 donations from individuals that exceeded $1,200, the largest $25,000. The cap on individual donations would eliminate around another $100,000.

All together, the NDP received about $2.4 million in donations which would be prohibited under the new rules, about 39 per cent of its fundraising total. The per vote subsidy of $1.98 million would replace much of the lost revenue, leaving them down $402,000, with $5.7 million to spend.

The Greens are the only party that comes out ahead. Based on their donations for 2016 they will give up no more than $30,000, while gaining $831,000 in subsidies, meaning that after the changes they will be better off by about $800,000, with $1.6 million a year to fund party operations. 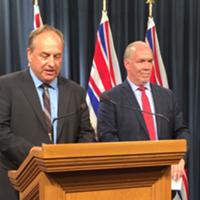 The Greens’ 2016 report filed with Elections BC shows they received just $4,900 from corporations, no money from trade unions and only 32 contributions from individuals that exceeded the new cap. Their largest individual donation was $5,000. (In 2015, the last full year before the Greens announced they would no longer accept corporate and union donations, they only had $10,549 in such contributions.)

Weaver acknowledged his party would benefit, but said the subsidies were something the other parties needed more.

“Coming from the BC Greens, let me tell you, we can run with less money. We did very well in the province with a fraction of the funding spent by others,” he said. “We also recognize there are bigger parties and the transition for these bigger parties is not easy.”

Since the Greens had no corporate and union donations, the change doesn’t hurt, Weaver said. “The best thing for us, the BC Greens, frankly, if we were purely selfish about this, would be to say let’s go to a $100 limit donation per month per person, that’s it, period, no other allowances, because that’s what we do now anyway.”

That would hurt the province, he said. “The other parties would be in free for all and collapse, but is that really what’s good for democracy? I don’t think so.”

The changes will make elections fairer, said Weaver. “We support that this is a level playing field that’s transitioning away from where we are to where we want to be.”