It’s not known as a popular trade deal in this country, and an access to information request released by the Council of Canadians this week revealed just how much Canadians dislike the Trans Pacific Partnership.

The group released the results of an access request for the results of a 2015 call from the federal government asking Canadians to email their thoughts on the TPP to Ottawa. The call came after the deal had been signed but before Parliament ratified it.

One poll in February 2016 showed the trade deal was supported by only 32 per cent of Canadians.

The TPP was nixed when the U.S. pulled out in January, but secretive bargaining sessions to craft a new deal without the Americans took place in Toronto in May and are ongoing in Sydney, Australia.

Forging ahead with the negotiations goes against the wishes of Canadians, argues the Council of Canadians, whose request for the public feedback revealed a landslide of opposition to the original deal.

Of the 18,214 submissions, a mere two supported the agreement.

About 16,800 of those submissions were the result of a campaign against the TPP organized by the Council of Canadians and Internet rights group OpenMedia. Another 1,365 came from individuals.

Global Affairs put 1,330 of those emails into categories based on their subject matter.

Here is a look at the top four concerns as submitted to Global Affairs.

Investor-state dispute settlement (ISDS) was top of the list with more than 400 submissions raising concerns about this part of the deal.

“The main issue is corporate control over our government at the expense of average Canadians,” reads one comment in the documents.

But ISDS scholar (and past Tyee Solutions Society editor) Chris Wood said such worries aren’t valid and are perpetuated by special interest groups “confused” by the reality of the trade deals.

Wood examined 24 trade disputes and nearly 200 media reports related to ISDS for his thesis on the subject. He said in most trade deals, such as the North American Free Trade Agreement, corporations can take a government to a settlement panel for a much narrower range of reasons than most people realize.

Most trade deals simply guarantee international companies are treated the same as domestic companies, including regulations around expropriation and government procurement restrictions, he said.

In the case of NAFTA, Wood said, Canada comes out on top because there are far more government contracts in the United States and Mexico for Canadian companies to bid on than vice versa.

Wood’s research found the majority of ISDS cases involving Canada were public procurement disputes and the awards were often minuscule compared to what the corporations were asking.

In most cases where a Canadian government has lost a decision it was a fair judgment, he said.

Wood blames the public backlash to ISDS on media, which often doesn’t report on the background of cases heard by a panel.

2. Get your hands off my copyright

Concern about intellectual property laws came in at a distant second with nearly 190 submissions to Global Affairs.

Submissions to the government express concerns that American copyright laws will be foisted upon Canadians, causing drug prices to skyrocket and hurting small business.

The arts could suffer as well, according to submissions.

Currently in Canada, works by an author become public domain 50 years after the author’s death, but some submissions rejected changes due to the TPP, which added another 20 years to the length of copyright protections.

“No new works would enter the public domain in Canada for next 20 years,” read one submission. “Who does this benefit?”

Also in the emails were concerns about the deal’s potential effects on Canada’s tech sector.

Such criticisms have been heard before.

Just after the deal was released to the public in 2016 Jim Balsillie, former CEO of Research in Motion, penned a large opinion piece for the Globe and Mail detailing his concerns about the agreement’s effect on Canadian tech companies.

3. Where are the thousands of missing submissions?

Complaints about the Trans Pacific Partnership public consultation process itself came next on the list with 130 submissions.

Meghan Sali of OpenMedia said thousands of submissions are missing from the access request received by the Council of Canadians.

Sali said her organization alone shepherded 27,000 submissions to Ottawa that are not included in the access package. Progressive advocacy group Leadnow said it sent 40,000 submissions that did not appear.

With only 18,000 submissions returned with the access request, Sali wonders what happened to the missing submissions and whether the federal government is paying attention to Canadians.

“Are we actually getting our concerns into the government?” she said. “Are they hearing us?”

Sali said her organization is trying to determine if all the submissions from the OpenMedia campaign were received by the government, or if there was an error in the access to information process.

She worries Ottawa disregarded the submissions because they were part of an organized campaign.

The murky nature of the negotiating process was also a concern for Canadians who objected to much of the agreement’s details being secret before it was signed.

Sali noted the federal government launched consultations on the controversial Anti-Terrorism Act in 2016. The public submissions were proactively published by the government, and changes made to the legislation after consultations reflected the concerns of Canadians who submitted responses, Sali said.

She wonders why Ottawa won’t take the same approach to trade deals.

“It’s not unreasonable to expect that that is the type of process we would also get on trade,” Sali said. “It seems like it should be the opposite when we’re talking about issues of national security.”

She said the “clampdown” on information related to the agreement frustrates those who want to engage in debate and consultation.

Food safety ranked number four on the list at 76 emails with submissions concerned the agreement would mean Canada must relax its food safety standards to allow foreign imports.

Submissions expressed fears that food would be unlabelled and genetically modified products would increase their market share in Canada.

Two years ago, former Dairy Farmers of Canada vice president Ron Versteeg warned the TPP could have a major effect on dairy farms in Canada.

“If the whole system is dismantled, probably half of the farms in Canada would disappear,” Versteeg told The Tyee in August 2015. “That’s the worst case scenario.”

“The globalization of dairy production thus raises questions about the future of Canadian farming,” read one submission. “Do our farmers face ‘competition’ from foreign sourced, cheaper, lower-quality products?” 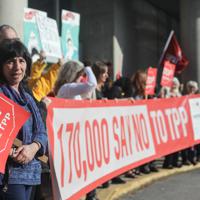 5. Let’s rant, but here’s a supporter

Rounding out the rest of the list were various concerns including the use of foreign labour in Canada and health and safety standards being reduced to accommodate foreign companies.

A section for rants or rude submissions was also included in the breakdown by Global Affairs.

One example of what constituted a submission under the category read: “The TPP is an aberration of trade agreements and suits to solely impose the will of plutocrats upon the working class. It subverts privacy, sovereignty, intellectual property, democracy and human rights.”

Meanwhile one of the messages in support of the agreement simply read “Pro-TPP. No question.”

A number of emails throughout the document also suggested more consultation or asked questions.