Paul Sockett, who served as director of the former Foodborne, Waterborne and Zoonotic Infections division at the Public Health Agency of Canada for 11 years, also called for more resources to deal with the highly contagious disease that has spread to wildlife populations of deer, moose and elk in Saskatchewan, Alberta and 24 U.S. states.

At an international gathering on prion diseases earlier this year, Canadian scientists revealed that macaque monkeys, a primate species closely related to humans, can develop the disease after being fed a diet of infected deer meat.

For years scientists thought it highly unlikely that chronic wasting disease, a prion-caused disease, could be transferred to humans who eat venison. Prions are infectious, misfolded proteins.

The Canadian Food Inspection Agency has announced it is “updating” its chronic wasting disease management program.

“Efforts to eradicate chronic wasting disease in the farmed cervid population have not been successful,” it recently announced.

The agency now hopes to reduce the risk of the disease by encouraging feedlot operators to enrol in a course on how to test their own animals and provide “biosecurity.”

To date the government has spent tens of millions of dollars trying to control the disease in game farms. The agency has tracked infected animals, monitored disease on feedlots, quarantined farms with outbreaks and compensated game ranchers.

Now the government says it plans to only respond to a disease’s outbreak on an industrial feedlot raising white tailed deer or elk if the farmer enrols in a Voluntary Herd Certification Program.

It is unclear where the new policy is coming from. A 2014 report by a federal task force largely dominated by the game ranch industry concluded that a voluntary herd certification program was not a desirable option, due, in part, to “lack of disease control effectiveness.”

Chronic wasting disease has been found on more than 75 game farms in Saskatchewan and Alberta where it has spilled into wild populations. There has never been a “federal policy by the CFIA to control cervid movement based on CWD status,” noted the report.

Darrel Rowledge, director of the Alliance For Public Wildlife, called the changes irresponsible and said a voluntary program won’t contain the epidemic.

“This change just expands on years of negligence,” Rowledge said.

“It doesn’t respect fundamental principles of epidemiology: you must stop the movement of live animals, product or hunter carcasses. [The agency] has never done that and now [we] have the world’s largest biomass of infected prions in Saskatchewan and North America.” — Andrew Nikiforuk

“The macaque study has raised the whole bar of caution from a potential human risk perspective,” said Sockett.

Researchers initially argued that mad cow disease would not be transmissible to humans before that neurological disease killed more than 200 beef consumers, primarily British citizens, at the height of the United Kingdom’s epidemic in the 1990s.

“I don’t want to see the whole situation we had in the United Kingdom repeated here in Canada where authorities denied a possibility of human health risk right up to the last moment,” said Sockett who worked at the U.K.’s then Public Health Laboratory Services during that devastating outbreak.

The mad cow epidemic upended the U.K.’s rural agricultural economy and caused between £740 million and £980 million in economic damages.

Sockett, a trained epidemiologist and health economist, distinctly remembers an animal health colleague coming into his office in 1986 and warning him “that there is something going on in cattle and I’m not eating beef.”

Ten years later, the first cases of the variant “Creutzfeldt-Jakob Disease” (the human form of mad cow) exploded into a political and health crisis in that country.

Meanwhile, the North American Elk Breeders Association has issued a press release in response to the Tyee article and queries that “questions the validity” of the Canadian research.

“The NAEBA does not believe supernatural inoculation (injection of infected material into the brain) is valid, nor does feeding of severely infected meat to monkeys prove that transmission is possible to humans,” said the release.

“There is no evidence to suggest a person has ever been infected with chronic wasting disease,” added the release.

“Administering a supernatural dose of a prion disease to any mammal is likely to cause some type of neurological event. There is no known lethal dose level for chronic wasting disease, therefore researchers in a lab can work behind closed doors until they see a result they like.”

Sockett said that nobody really knows what chronic wasting disease would look like in humans or how it would damage brain function.

“The number of people consuming deer meat is relatively low compared to the large numbers of Brits who consumed infected beef in the U.K. and produced under 200 cases in that country.”

At this stage, the question is whether we want to expose anyone to a disease similar to mad cow, which is invariably fatal, said Sockett.

Chronic wasting disease first emerged among captive deer at a wildlife research facility in Colorado in 1967. Researchers didn’t realize that the mysterious killer was caused by prions until 1978.

Scientists confirmed the first case on a game farm in Saskatchewan in 1996 and later traced the origin of the outbreak to infected animals from a U.S. game farm.

Alberta later found chronic wasting disease infections on farms as well, and in 2004 wildlife experts confirmed repeated transfers of the disease from commercial farms into wild deer and elk populations in Canada.

Saskatchewan remains a hot spot for chronic wasting disease outbreaks on captive game farms and in wild populations. There is no vaccine and no live test for the disease.

Unlike mad cow disease, which spread through contaminated feed, chronic wasting disease can be spread by saliva, urine and even infected plants. 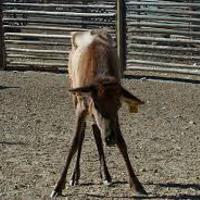 Like the Elk Breeders Association, Sockett has no doubt that at least some hunters of wild deer and particularly First Nation communities dependent on “country food” on the prairies have been exposed to infected deer meat.

Although there is no evidence that chronic wasting disease has yet infected humans, researchers have no idea how the disease might even express itself in human populations, Sockett said.

To protect human health he recommends that regulators test “the carcass of every cervid in chronic wasting disease-infected areas before people consume them.” He added that the federal agencies responsible for controlling the disease and the risk of human infections, including the Public Health Agency, Canadian Food Inspection Agency, Agriculture Canada and Environment Canada should be working closely together and ensuring national co-ordination and sharing of risk assessment data.

The recent federal advisory, for example, recommended “that a precautionary approach to the management of the potential risks of exposure through food and health products is warranted.”

“What do these organizations mean by precautionary approach and are they using the same dictionary?” asked Sockett. “Are they sharing their risk assessments?”

In addition, the federal government needs to focus on policies that prevent the spread of the disease in cervids.

“There needs to be a greater sense of urgency, that is my feeling, and action on the necessary precautions needs to be in place as soon as possible.”

He also suggests that the government allocate dollars to examine the economic implications of the disease.

“It could hugely affect the Canadian economy.”

Lastly, he’d like to see the government establish a national advisory committee composed of scientists, wildlife experts, First Nations and rural citizens to co-ordinate a response to the epidemic.

Such a body could evaluate things from a multi-disciplinary perspective and direct research priorities, Sockett said.