Canada should no longer turn away refugee claimants at the U.S. border, say three rights organizations that have launched a legal challenge citing risks to refugees in America.

The Safe Third Country Agreement denies entry to almost all refugee claimants arriving from the U.S. because it’s considered a safe place for them to make their claims for asylum.

The organizations say the situation in the United States has deteriorated to a point where Canada must allow refugees to make refugee claims in Canada.

They have gone to court to seek a ruling forcing the government to allow an unidentified woman from El Salvador to enter Canada and apply for asylum. The woman, who fled to the U.S. with her daughters after a local gang began threatening their lives, was detained at a Canadian border crossing Wednesday afternoon.

“She has strong reasons for believing that she might not be protected if forced to make her refugee claim in the US, rather than Canada,” says a release from the organizations.

At The Tyee’s deadline Wednesday afternoon, the woman’s lawyer, Prasanna Balasundaram, said he was attempting to get a stay allowing the woman to enter Canada.

Elizabeth Berton-Hunter of Amnesty International told The Tyee that even if the woman is denied entry the group will still be challenging the Safe Third Country Agreement on her behalf.

Berton-Hunter said she doesn’t know how long the woman has been in the U.S., but the advocates knew she would be trying to enter Canada today. “It’s an ongoing case we’ve been aware of,” she said.

A May report prepared by the Canadian Council for Refugees and Amnesty International argues the agreement poses “a significant threat” to refugees because it allows Canada to return refugees to the U.S. despite “documented failings” in the country's refugee protections. 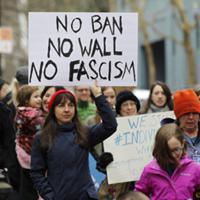 It lists the threat of expedited removal without a proper hearing, detention of asylum seekers and inconsistent recognition of gender-based asylum claims as some of those failings.

The situation has become even worse under President Donald Trump, the report says. Many refugees entering Canada from the U.S. illegally have told those helping them that they left because they feared for their safety since Trump was elected.

But the federal government has said it has no plans to change or suspend the agreement the dramatic increase in undocumented refugee claimants entering Canada.

While claimants arriving at border crossings are turned away, those make their way into Canada unofficially are allowed to make refugee claims. That has led to an increase in the numbers of people crossing through fields and forests, sometimes under dangerous conditions.