Horgan wouldn’t say how much parents would be paying for those initial new childcare spaces, nor how much the program would cost the province overall.

Estimates have pegged the cost of the NDP’s plan at $1.5 billion annually, with advocates saying the contributions of parents returning to the workforce will come close to paying for it.

But the government could start providing $10-a-day childcare at existing childcare programs as early as next month, says Emily Mlieczko, executive director of the Early Childhood Educators of British Columbia, a professional organization that developed the initial $10-a-day proposal with the Coalition of Childcare Advocates in 2011.

Provincial subsidies should start with all infant and toddler early childhood education programs, she said, “because that’s the highest cost for families right now, and the greatest need.”

The plan calls for eliminating fees altogether for families making $40,000 or less.

The implementation of an Early Care and Learning Act stipulating the quality of care and rights of parents and children should also be introduced immediately, Mlieczko said.

She agrees with Horgan, however, that implementing other elements of the seven-stage plan, including amalgamating childcare responsibility under the B.C. Ministry of Education, increasing worker education and pay, and developing infrastructure required for a new public childcare system, will take a decade.

Unfortunately, that means parents in need of childcare today may not be helped by the plan.

“That’s why we need government to work together — whoever they are — to really look at this issue and do something that’s holistic and looks at all the issues, because we are in a childcare crisis,” she said.

The BC Liberals, who won the most seats in the May election and remain in power for the time being, had pledged to create 13,000 new childcare spaces by 2020 while maintaining the current childcare subsidy capped at $550 a month, a little over half the average monthly cost of care in Metro Vancouver.

The $10-a-day plan would also invite existing private and non-profit providers to join a new public system, adopting the standards and practices established under the proposed Early Care and Learning Act. 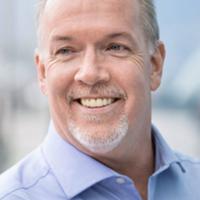 BC NDP Vows $10-a-Day Child Care: ‘It Pays for Itself Over Time’

The $10-a-day plan his party has endorsed includes lifting workers up from an average $16.53 hourly pay to $25 an hour, though Horgan would not speculate how much workers should be paid.

A pay increase is key to attracting and retaining educated workers, said Mlieczko.

Despite the difference in timelines, Horgan said he agrees with every step called for in the $10-a-day childcare plan.

“We’ll modify it depending on implementation,” he said. “We agree with it today, and we’re going to implement it going forward.”