He sees his profession as an advantage.

Caron is in favour of free trade, as long human rights are part of agreements and Canadians get a good deal. He also chides the Liberal government for poor economic growth.

A New Democrat lecturing Ottawa opponents on the economy may seem like a tough sell, but Caron said party affiliation has nothing to do with who can claim to be an economic whiz.

Economics transcend politics and are about the science of redistribution, he told The Tyee this week, sipping a large latte that filled one corner of a coffee shop in downtown Ottawa with the thick scent of caramel.

“It’s mostly milk,” Caron laughs as he defends the size of the giant cup.

One dare not challenge the Quebec MP on the claim, as ratios are part of his stock in trade as an economist, a career choice made more than 20 years ago after working as an activist.

“I was trying to find economists around me that would help counteract the messages that we heard from the Mike Harrises and the Fraser Institute,” he said. “It’s important to take a stand on it because for 50 years we, as a political party, have been defined on economics by Liberals and by Conservatives.”

As well as stints as a researcher and economist with the Communications, Energy and Paperworks Union, Caron also served as national president of the Canadian Federation of Students in the mid-1990s.

In Parliament since 2011, he has served as natural resources critic and deputy finance critic.

Caron is about details — his words seem chosen with great care in sentences meant to convey nuances while discussing larger issues.

And, he maintained after Sunday’s first leadership debate, the race will end up being about details.

“We all agree on what needs to be done, where differences will come is how we get there,” he told reporters during a post-debate scrum.

Getting there includes building the NDP’s economic credibility, Caron says, arguing opponents have labelled the NDP a “tax and spend party” for decades and it hasn’t done a good job of defending itself.

Meanwhile both the Conservatives and Liberals have performed poorly on the economy, telling Canadians to be satisfied with 1.8 per cent GDP growth and “job churn,” he said. The NDP needs to launch credible attacks on those failures, he added.

Caron’s mission begins with his own campaign proposal for a guaranteed basic income.

Other candidates have promised a guaranteed income, but Caron said that as an economist he can explain the concept and defend it against opponents’ attacks. He even predicts the Liberals will promise a guaranteed income during the 2019 campaign.

“I crunch the numbers, I work on it and I understand what the numbers mean,” he said, promising to have the policy costed during the leadership campaign. “People are actually confident I know what I’m doing.”

Along with a costed guaranteed income, Caron said he will also present a 30-year plan to shift from fossil fuels, including how to replace the jobs now provided by the industry.

That plan is part of addressing what he calls the two biggest challenges facing the country — economic inequality and climate change. 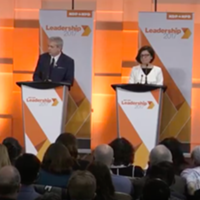 The debate Sunday found all four leadership candidates saying that engaging grassroots organizations and embracing marginalized people, which includes working people, are the path to success in the next election.

Thus Caron’s assertion that the leadership contest is about who has the ability to achieve those goals.

Caron admits he’s the least well known of the four candidates. Charlie Angus and Peter Julian have been MPs since 2004. Niki Ashton, first elected in 2008, also boosted her profile with a party leadership bid in 2011.

Caron said he will be hitting the road for kitchen and town hall meetings.

“I need to speak to members, I want people to know me better,” he said. “I want to be challenged on my views, I want to be answering tough questions.”