Eight Canadian rights organizations released a joint statement Monday calling on the federal government to commit to an unconditional ban on torture, including a promise not to use any information obtained through torture in another country.

But Public Safety Minister Ralph Goodale said the Liberals are not yet ready to reverse Harper government directives that critics say condone and support torture by foreign governments.

Goodale said more than a year ago the “troubling” 2011 directives were being reviewed.

But the review has yet to result in any changes to Canada’s torture policy.

The organizations, which include Amnesty International, the B.C. Civil Liberties Association and the National Council of Canadian Muslims, wrote Goodale after U.S. President Donald Trump said he is open to the use of torture. Trump has said the decision on the use of torture will be left to Defense Secretary James Mattis, who has said he believes torture is ineffective.

They called on the government to revoke ministerial directives allowing Canadian security agencies to use information gained through torture in other countries and to share information with nations that use torture.

“One year ago, you committed to reviewing these directives,” the letter reads. “We hope that, after consideration, you are now prepared to make revisions that will ensure compliance with Canada’s binding international obligation to oppose torture in all instances, without exception.”

The statement refers to the case of Maher Arar, a Canadian citizen deported secretly to Syria while in New York on his way home to Canada from Tunisia. While held in Syria for a year, he was beaten and tortured, but never charged with a crime.

Canada apologized because the RCMP provided false information to U.S. authorities about Arar’s ties to terrorist organizations. The government paid him more than $10 million as a settlement.

“A decade ago, the public inquiry into the case of Maher Arar clearly documented that irresponsible sharing of intelligence information from and to Canada can and does result in torture,” the groups wrote in their letter to Goodale. 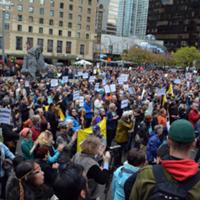 Tell Ottawa — Canada Must End Its Complicity in Torture

But Monday in the House of Commons Goodale would not commit to changes to the policies of the Harper government.

But Goodale did not commit to any changes.

But he said the Harper government’s ministerial directives on torture were still being reviewed “to ensure that they are consistent with the policies and practices of the Government of Canada.”