A B.C. Supreme Court justice has ordered the Environmental Appeal Board to revisit its controversial 2013 approval of a contaminated waste dump in a quarry near Shawnigan Lake on Vancouver Island.

Justice Robert Sewell ruled that the board failed to act fairly when it approved the project.

He found the board relied on a technical assessment report (TAR) on the project’s environmental impacts prepared by Active Earth Engineering Ltd.

But the board didn’t know that Active Earth was negotiating to be a partner in the contaminated waste site, Sewell found.

The assessment report “was prepared by engineers who were not independent and who stood to profit from the continued operation of the facility,” Sewell said. “That is a circumstance that goes to the heart of the integrity of the approval process under the Environmental Management Act.”

Active Earth did the work as its contribution to a joint venture that would operate the waste site and “earn income from it.”

“Withholding of this information from the board brought the integrity of the approval process and appeal into question,” concluded the judge. “The TAR was prepared by persons who were biased in favour of approving the project.”

“I am satisfied that the board was misled about the true nature of the relationship between Active Earth and CHH [quarry owner Cobble Hill Holdings] and the fact that Active Earth’s principals were partners in the proposed facility,” Sewell found.

Sewell found Marty Block of Cobble Hill Holdings “deliberately concealed” information about the relationship with Active Earth from the board in his testimony.

The company’s “lack of candour in these proceedings reinforces my view that the interests of justice require that the decision be set aside and the matter remitted to the board for reconsideration in light of the fresh evidence.”

The board also relied on testimony from government witnesses without determining if they were qualified to provide expert evidence, Sewell found.

Sonia Furstenau, Cowichan Valley regional director, hailed the decision as an important environmental ruling for the province. “It says there are rules and they have to be followed,” she said.

She said citizens learned almost 18 months ago that Active Earth were participants in the dump project, not independent engineers. The information was shared with the environment ministry, but it took no action, Furstenau said.

“By not acting on that information the Ministry of Environment sent out a message that they were comfortable being misled in a permitting process, and that’s a dangerous message,” she said.

David Karn, a ministry spokesperson, said in an email that it was “concerned around Justice Sewell’s findings with respect to the way evidence was presented to the Environmental Appeal Board. The ministry will take time to review the decision to determine how this impacts the province’s role in permitting the facility.”

No contaminated soil can now be received by the facility until the Environmental Assessment Board reviews its decision.

The government granted South Island Aggregates and Cobble Hill Holdings the right to fill part of an active quarry with contaminated soil and ash containing hydrocarbons, dioxins and furans against the wishes of local government.

The quarry is located above from Shawnigan Lake, the source of drinking water for thousands of people.

Although the permit says the company can’t release untreated wastewater, the facility violated that permit condition in November 2015 and October 2016.

In November, Environment Minister Mary Polak threatened the company with suspension or cancellation of its permit because of “non-compliance” issues.

The Cowichan Valley Regional District and Shawnigan Residents Association have argued that the province should not be able to threaten a community’s watershed and drinking water by turning quarries into waste disposal sites.

The issue has broader implications. There are more than 2,500 quarries in the province, but few regulations on using them as contaminated soil dumps. In contrast, landfills are heavily regulated.

Blaise Salmon, a community resident and researcher for Shawnigan Water Community Action Group, said the province has no site requirements for contaminated soil facilities in a quarry.

Under B.C.’s Mines Act, he said, “any quarry can apply for a permit to accept contaminated waste, regardless of where it is located, and how close it is to a drinking water source. No independent environmental assessment is required.”

Quarry owners Cobble Hill Holdings and South Island Aggregates contend the facility helps prevent the illegal dumping of contaminated waste by storing it in engineered cells that are “permanently encapsulated.”

Problems with the site were identified years ago.

In a 2013 letter to the Minister of the Environment, hydrogeologist Dennis Lowen warned that the quarry sits on fractured limestone and “provides no natural protection for the established drinking water sources in the region.” 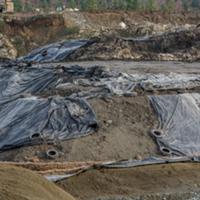 In the last two years, the Cowichan Valley Regional District and the Shawnigan Residents Association have spent more than $2 million on a legal battle to force the provincial government to revoke the dump permit.

The owners appealed and the B.C. Court of Appeal found “the Province has exclusive jurisdiction over the regulation of quarries/mines and their related site reclamation activities.”

The Cowichan Valley Regional District is appealing that decision.

The key issue, says Furstenau, is about accountability and “who decides what happens in our watershed.”