A large spill of contaminated water from a controversial Vancouver Island landfill this month contained elevated levels of toxins above drinking water standards.

The quarry near Shawnigan Lake is being used as a dump for contaminated waste, including 88,000 tonnes from CFB Esquimalt under a federal government contract.

The British Columbia Ministry of Environment reported this week that it found high levels of toluene, a carcinogen, as well as heavy metals including iron, chromium and aluminum in water spilled from the site that entered the Lake Shawnigan watershed. The lake provides drinking water for almost 12,000 people on Vancouver Island.

In 2013, the provincial government granted South Island Aggregates and Cobble Hill Holdings the right to fill part of a quarry with contaminated soil and ash containing hydrocarbons, dioxins and furans against the wishes of local government.

The permit also allows for the discharge of “treated effluent to an ephemeral stream.”

But local government and thousands of residents opposed the venture, calling it risky and a recipe for widespread water contamination over time.

In the last two years, the Cowichan Valley Regional District and the Shawnigan Residents Association have spent more than $2 million on a legal battle to force the provincial government to revoke the permit.

“Local communities shouldn’t have to go to court to fight the government to protect the environment,” said Sonia Furstenau, an elected director with the district.

She added that the recent spills prove that “putting toxins at the top of a watershed is just a dumb idea.”

The provincial government says that it notified Island Health about the most recent contamination, but added that “elevated levels of a few metals in the settling pond discharge and minor exceedances in the immediate downstream environment” don’t pose a health risk.

But Bernhard Juurlink, a member of the Shawnigan Residents Association with a doctorate in medical science, said that if the leaching of pollutants offsite continued over time “the real problem will be detected in the future.” The operator has a permit to receive an additional five million tonnes over the next 48 years.

“When you compare the water from Shawnigan Creek upstream of the site to the water coming off the site, there is a shocking difference in the levels of chlorides, sulfates and sodium,” Furstenau said.

Juurlink said the Environment Ministry collected water samples one week after a major spill from the site prompted “a pollution prevention order” against the operator.

On Oct. 12, the province ordered Cobble Hill Holdings and South Island Aggregates, co-owners of the site, to cover and properly collect run-off from contaminated soils after the facility spilled 14,000 to 28,000 litres of untreated water into the local watershed during a heavy rainstorm.

The ministry ordered the company to “prevent any further discharge of untreated contact water to the environment” as quarry employees rushed to cover the site with tarps weighted down by tires.

The 2013 operating permit for the site specifically requires “that all runoff waters for the landfill site be collected and treated” and that all contaminated soil be covered from November to April during the rainy season.

Since 2014 the landfill has violated its permit conditions repeatedly and been found in “non-compliance” several times. Sampling and reporting of soil samples didn’t take place when required and contaminated water flowed offsite instead of into a settling pond. In one case, a monitoring well wasn’t operational.

In November 2015, water discharged from the site exceeded the province’s drinking water guidelines for aluminum, iron and manganese and raised provincial concerns about the operators ability to manage wastewater properly.

Despite warning letters from the government, the company was found to have violated the conditions of its permit again in the October spill.

“Why did the government do nothing when a company openly defied a requirement from Ministry of Environment staff to undertake a review of how it handles contaminated water at its site?” asked Furstenau in a recent op-ed column.

“Why did the ministry tolerate ongoing non-compliance and ongoing resistance from this company? And why is Environment Minister Mary Polak now stating publicly that she has no issues with this company or this site?”

Polak has dismissed the issue as a “political problem.”

She told the CBC last week that “I can’t pull the permit simply because the issue is giving me a political problem.”

Andrew Weaver, leader of the Green Party, called for Polak’s resignation Thursday, partly due to “the repeated compliance failures at the Shawnigan contaminated soil facility with no real ministerial response.”

Weaver said that Polak had failed to uphold her mandate to protect the environment.

In frustration with the provincial government, the regional district took the environmental controversy to B.C.’s Supreme Court.

The B.C. Court of Appeal set aside the ban and allowed the dumping of another 100,000 tonnes of soil until the appeal is decided. The court accepted the company’s argument that if it allowed the injunction barring dumping to stand, the company could declare bankruptcy and the landfill would become an “orphan site” and the public’s responsibility. A decision is expected soon.

The Department of National Defence has a contract to truck and dump 88,000 tonnes of contaminated soil from CFB Esquimalt to the quarry. Local residents demonstrated outside the base in April and have asked the federal government not to use the landfill. They cited the B.C. Supreme Court ruling that the landfill violates district-zoning regulations. 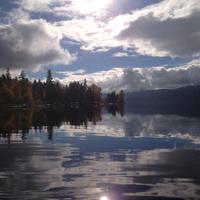 But the federal government rejected the request.

“The DND very carefully explored its options before choosing the disposal facility for this project,” it said in a statement. “The chosen site meets criteria, which allows DND to complete this project at a reasonable cost, while respecting the needs of its contractor.”

Furstenau noted that Prime Minister Justin Trudeau had promised that his government would seek the permission of communities before forcing inappropriate projects on them. “This community has never given permission for a landfill of this sort,” she said.

The quarry operator says it is complying with the law and its permit conditions.

“If I had concerns that there was any chance that we were going to pollute somebody’s water, we would shut this place down ourselves,” Todd Mizuik told the CBC last year. He is co-owner of South Island Resource Management, which operates the site.

To date, South Island Aggregates is the only quarry in the province that is allowed to import contaminated soil.

But a proposal to fill a quarry in Campbell River’s watershed with contaminated waste has raised alarm bells among citizens there.

The Campbell River Environmental Committee has asked local and provincial government to reject the proposed site due to its location in a watershed, insufficient groundwater study and contamination risks “to our drinking water, the Quinsam River Hatchery water supply and the Quinsam River.”