In recent months, Saskatchewan Premier Brad Wall has seemed to be the lone voice speaking out against a national carbon price in Canada. 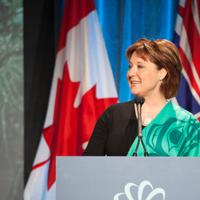 Forget the Praise: BC's Carbon Tax Is a Failure

Canada's three territorial premiers have also banded together against a carbon tax for the North, arguing that carbon pricing would have an unfair impact on fragile northern economies.

This despite the fact that temperatures in the Arctic are rising twice as fast as the global average, and northern communities are already dealing with the effects of melting permafrost and sea ice.

The three northern premiers have presented a united front on carbon pricing since the first ministers' meeting in Vancouver in early March, when Canada's political leaders agreed to form a working group to discuss the issue.

At the time, the leaders released a joint statement voicing their opposition. "I believe a carbon tax would have a negative impact on quality of life in the North," Yukon Premier Darrell Pasloski said in the statement.

"Canada's climate change goals must be conducted in a way that does not significantly impact northern costs of living, undermine food security or threaten emerging economies."

The high cost of northern living is the reason most commonly used by the territories' leaders to argue that a carbon tax wouldn't work for the North. But it's not the only one.

Pasloski and Nunavut Premier Peter Taptuna also say the territories already pay a price on carbon, since they import heavily from British Columbia, Alberta, Quebec and Ontario, which already have or will soon have carbon pricing.

They've also argued that carbon taxes are meant to change people's behaviour, but in remote northern regions, it's not easy to switch off fossil fuels. All Nunavut communities run on diesel, as do several in the Northwest Territories and the Yukon.

"Unfortunately, there's not a lot of options in the North, and you can't just decide to leave your car at home and get on a subway," Pasloski said.

But Mark Jaccard, a professor of sustainable energy at Simon Fraser University, says the premiers' arguments are mostly bogus.

He said people are always convinced that the place they live will be hardest hit by a price on carbon. Before B.C. implemented its carbon tax back in 2008, Jaccard said, people in the north of the province were sure they would lose out.

But in reality, he found they were less affected than people further south, because their homes were better insulated and their commutes were shorter than those of Lower Mainland suburbanites.

"It didn't matter where they were. They were always sure the carbon tax would hurt them more than anyone else," he said.

As a result, Jaccard is skeptical that the territories would suffer disproportionately from carbon pricing. Instead, he called the northern premiers' arguments "possibly delusional and disingenuous."

Carbon taxes do have a cost, of course. But Jaccard said it's not true that the cost of living would definitely increase for every northern resident.

For instance, B.C.'s carbon tax is revenue-neutral, meaning the government has cut income and other taxes to offset the added revenue. The province also has a climate action tax credit designed to soften the impact of the carbon tax on low-income families.

Nic Rivers, an associate professor of public and international affairs at the University of Ottawa, took issue with the idea that the territories already pay a carbon tax through imported goods and services.

He speculated that about half of the territories' emissions are indirect, meaning they come from the production of goods and services outside the North.

The rest, he said, would come from northern residents driving their cars and heating their homes -- "emissions where you can see the smoke coming out in the territories," he explained.

And of those indirect emissions, he guessed that a very small percentage come from jurisdictions with carbon pricing, since many imports come from overseas.

He also said that Canadian provinces take steps to ensure their carbon prices aren't passed on with exported goods, since that would make them less competitive.

"They've basically given subsidies to export-oriented sectors," he said.

All of that suggests the territories aren't paying much in carbon pricing at the moment, he said.

Still, Jaccard and Rivers both struggled to come up with suggestions for reducing fossil-fuel dependence in remote, diesel-powered communities.

Jaccard suggested that wood chips could be used for combined heat and power in the Yukon, where most communities are connected by roads and an electrical grid. But that's likely not viable in Nunavut, where the communities are not connected at all.

Rivers said people in isolated areas could still find ways of conserving power individually if a carbon tax were implemented. But it's hard to see that amounting to more than a drop in the bucket for diesel-powered communities in regions that drop to minus 50 degrees in the winter.

It's worth noting, too, that the premiers aren't the only ones speaking out against a carbon tax in the North.

Chief Mathieya Alatini of the Kluane First Nation in southwest Yukon also voiced concerns about carbon pricing after she attended the Vancouver meetings in March.

Her community runs on diesel, with no immediate prospect of being connected to the territory's main grid. "For us, a lot of fuel comes from B.C., which already has a carbon tax on it," she said.

She prefers the idea of creating tax incentives for people with green-energy projects. "It's incentivizing becoming green," she said. "I think we're a lot better off if we do that type of solution versus taxing people."

Alatini is far from indifferent to climate change. The Kluane First Nation has taken a lead on green energy projects in the Yukon.

It has plans to build three wind turbines that it hopes will supply nearly one-third of the community's electricity demand. It's also installed solar panels on one local building and uses a wood-chip boiler to heat several buildings. Still, Alatini's not sold on a carbon tax.

Though the northern governments are united against carbon pricing, the population of the three territories is barely more than 100,000 and the three premiers are rarely heard on the national stage. It's not surprising, perhaps, that neither Jaccard nor Rivers had heard of the North's stance on carbon pricing until The Tyee asked them about it.

So if the Trudeau government does decide to develop a national carbon price after the working group reports its findings in October, it's unclear what the territories could do about it.

And even the premiers seem unsure about that.

"I don't know what all the levers are that the federal government has," Pasloski has acknowledged. "We believe that making everything cost more money is not the solution."