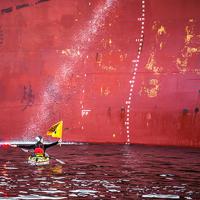 Kinder Morgan wants to twin an existing pipeline that transports diluted bitumen from Alberta's oilsands to a terminal at Burnaby with a second line that will nearly triple its flow to 890,000 barrels per day from 300,000.

The NEB concluded that the expansion was in the Canadian public interest because it would create jobs and transport Alberta oil to overseas markets. But a vocal opposition questions that business case, and says the pipeline is environmentally irresponsible.

"Today's decision does not mean Kinder Morgan will be built," said Adam Scott of Oil Change International. "No one should be surprised that the National Energy Board issued a rubber-stamp approval today. It's widely recognized that Canada’s national energy regulator is too close to industry and is lacking credibility."

The board's decision downplayed a litany of concerns that had been raised in hearings and submissions.

It found the anticipated seven-fold increase in tanker traffic beneath Vancouver's Lion's Gate and Second Narrows bridges to the Westridge Marine Terminal acceptable, it said, because, "the level of traffic is expected to increase, with or without Project-related marine vessels."

Similarly, the board acknowledged that an increase in traffic from five tankers a month to more than one a day may come at a heavy cost to the Southern resident killer whale population, which is especially vulnerable to ship noise.

The board brushed the concern aside, noting that there are initiatives to support the whales' conservation and recovery, although it did require Kinder Morgan to file a marine mammal protection plan with the NEB, and enhance its tug escorts to the Westridge Marine Terminal.

The NEB panel also did not consider the project's climate effects beyond greenhouse emissions directly from the pipeline.

"Upstream and downstream facilities were not directly linked or part of the project application," the report said, adding, "The NEB also does not regulate emissions resulting from the public's demand for and consumption of energy."

Oil Change International has estimated that the pipeline's construction "would facilitate a major expansion of tar sands extraction -- releasing as much as 162 million additional tonnes of CO2 per year." That's equivalent to 34 million new cars, or 42 coal plants.

In a first, however, the board required Kinder Morgan to offset its operating emissions.

The board also dismissed the rising concern among oil industry analysts that little market exists for high-carbon, high-cost oilsands crude in a world awash in some of the cheapest oil in years, and actively seeking to leave the climate-changing fuel behind.

In the board's view: "There is adequate supply to support the capacity… and the NEB is satisfied there is sufficient market to absorb the volumes."

Trans Mountain isn't the only project seeking to carry Alberta oil to foreign markets. Enbridge's Northern Gateway line from the oilsands to Kitimat, B.C., was approved in 2014 by the Conservative government -- on condition that construction start by the end of 2016.

This month, Enbridge asked the NEB for a three-year extension on that deadline. Energy East, which would pipe crude to a terminal in New Brunswick, is still under NEB review with a report not due 'til March 2018.

Kinder Morgan projects the cost of its project at $6.8 billion, about half the Energy East plan. The NEB gave the company until Sept. 30, 2021, to abide by all its conditions and start construction. It has previously targeted late 2019 for oil to begin to flow from the finished line.

But Thursday's thumbs-up wasn't the last one Kinder Morgan needs. A separate assessment by Environment and Climate Change Canada is under way and due to report soon. The province, prodded by a recent court decision, is also conducting an independent environmental review.

And earlier this week the Trudeau government named a former First Nations elected chief, a former Alberta finance minister, and the former premier of the Yukon, to conduct a third review, that will include re-examining the NEB's work, particularly with regard to First Nations' views and the pipeline's climate impact.

Even that last report, due in November won't end the matter. The federal cabinet will make the final call before the end of the year.

The board's decision, though widely expected, drew criticism from opposition politicians in Victoria and Ottawa, environmental groups, and aboriginal communities -- both for its contents and the board's process in reaching it -- but a muted reaction from the British Columbia government, which formally opposed the project while it was before the NEB.

In Victoria, where the legislature was ending its session, B.C. Environment Minister Mary Polak reiterated her government's position that, "We will only support new heavy oil pipelines in British Columbia if our five conditions can be met."

B.C. set conditions in 2012 that included having world leading marine and land-based spill prevention and recovery systems in place, addressing Aboriginal and treaty rights, and ensuring B.C. receives a fair share of any fiscal or economic benefits.

Some of the NEB's conditions also address British Columbia's, Polak said, but "We are not there yet."

BC NDP leader John Horgan described the board's conclusion as foregone. "We got the predictable response, the rubber stamp we expected from the Stephen Harper process," he said.

Describing the NEB as appearing to be in crisis during its review, Horgan said it failed to sufficiently address marine spill response, climate change or the concerns of First Nations.

The report doesn't change the NDP's position, he said. "This pipeline's not in the public interest."

In Ottawa, federal NDP critic for the environment and climate change, Nathan Cullen, issued a statement saying much the same: "While we are disappointed we're not surprised, simply because this process was the one that was put in place by Mr. Harper."

Cullen accused the Trudeau government of breaking its campaign process to reform the much-criticized National Energy Board. "The great disappointment is that Mr. Trudeau promised clearly and on tape that he would put in place a completely new process and review this pipeline under that process.

"Today, unfortunately the process is exactly the same as it was under Mr. Harper."

B.C. Green Party leader Andrew Weaver echoed that view. "It's clear to me this was nothing more than a box-ticking exercise," he said. "Evidence was simply ignored, evidence was glossed over."

For example, he said, the report cites testimony from Aboriginal representatives -- who are mostly opposed to the project -- but mainly to argue that the company met its constitutional obligation to "consult" with First Nations along the pipeline route.

It wouldn't take much to improve on the experience when the original Trans Mountain pipeline was built in 1953. At the time it was still illegal under the Indian Act for indigenous people to hire a lawyer to pursue any kind of aboriginal rights or lands claim.

Nations like the Tsleil-Waututh, whose traditional territory includes Burrard Inlet, where the pipeline finally reached the sea, had no say at all.

Today "the tides have changed," Rueben George, Tsleil-Waututh's sundance chief, warned Kinder Morgan. With more than 229 court decisions in recent decades affirming aboriginal rights and title, he said, "industry can't do nothing in British Columbia without talking to First Nations."*

If just one tanker spilled its cargo, George said, it would devastate Vancouver's coastal ecosystem. "We'll do whatever it takes to stop it."

Within minutes of the decision, environmental groups like Oil Change, the Dogwood Initiative and Ecojustice also emailed calls for additional support to continue to fight Trans Mountain.

"There's no need to accept the risk," Dogwood's website argued against the line. "Far more jobs would be put at risk than created in B.C., and ramping up oilsands production to feed Asian demand is not in the national interest."

"It's not if there's a dump, it's when," says Tsleil-Waututh elder Amy George. "Our ancestors fought for our land in this inlet. Get to this generation and it stops? No way.

With files from Andrew MacLeod and Jeremy Nuttall.

*Editor's note: The first photo to run with this story was incorrectly captioned, so we have replaced it.