Some of the world's largest oil firms face a high-powered U.S. legal effort to investigate them for long knowing, and hiding, the link between burning fossil fuels and destructive climate change. 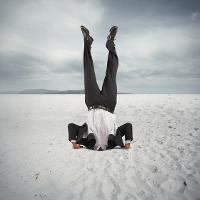 Is Your Pension in Climate Denial?

If the oil giants lose, their total liabilities could run into the billions or even trillions of dollars, according to some legal experts, and Canadian energy firms may not be immune.

"We have heard the scientists. We know what's happening to the planet. There is no dispute, but there is confusion -- and confusion sowed by those with an interest in profiting from the confusion, and creating misperceptions in the eyes of the American public that really need to be cleared up," he added.**

A total of 17 state attorneys general agreed to coordinate their investigations against ExxonMobil and other giant oil firms suspected of suppressing the risks of climate change for decades from their shareholders and the American public.

The announcement follows New York's moves in November to issue a subpoena against ExxonMobil to hand over historic corporate memos going back 40 years related to its research on climate change.

A Washington D.C. legal expert believes this new, wider probe will pump out invaluable documents that will fuel further lawsuits against oil companies for the harms caused by climate change globally.

“Documents lead to new documents. Testimonies lead to new witnesses. The story is going to come into the public light in a much richer and a more damning way,” said Carroll Muffett, with the Center for International Environmental Law in Washington D.C. on Tuesday.

Some of these ExxonMobil documents have already been made public by investigative journalists at Inside Climate, the LA Times and the Columbia School of Journalism.

The memoranda suggest that the giant company in the 1970s -- then known simply as Exxon -- had scientists who knew that the company's fossil fuel products were worsening climate change, but actively spent millions of dollars on climate denial propaganda to deny it, said Schneiderman.

"You have to tell the truth. You can't make the kinds of misrepresentations we've seen here," he added.

The government attorney said climate denial by publicly traded companies is a form of "fraud." In his state of New York, most of the world's companies are traded. Local laws prohibit companies from denying the truth to investors about a company's risks.

Oil firms could be on hook for trillions: expert

Muffett believes the much larger U.S.-wide investigation could expose firms to "billions of dollars" in liabilities -- maybe more.

"It affects nearly everyone on earth. What are the financial implications of that deception? It's measured in the trillions of dollars," said the legal expert.

The pioneering legal field of "climate litigation" -- once dormant with few legal victories -- is accelerating faster than global warming, he noted.

ExxonMobil, in particular, he said, will be well armed with an army of lawyers to mount a powerful defence. "But when you combine the investigative legal capacities of entire [U.S.] states -- the legal playing field starts to look a lot more level."

ExxonMobil said Tuesday in a statement sent to The Tyee that the allegations against it "are politically motivated."

"The allegations are based on the false premise that ExxonMobil reached definitive conclusions about anthropogenic climate change before the world's experts and before the science itself had matured, and then withheld it from the broader scientific community."

"I think Canadian courts could entertain a possible lawsuit by local governments, provincial governments, by individuals or by companies that are impacted by climate change," said Gage from Victoria, B.C. on Tuesday.

"Canadian oil and gas companies could also be sued elsewhere in the world for the emissions and the product they are taking out of the ground here. A Bangladeshi could file a lawsuit against a Canadian company for the harm that's happening in Bangladesh."

"It certainly does mean Canadian companies could be on the hook."

Gage pointed to relevant climate litigation internationally. In Germany, he said, coal company RWE* is being sued by a Peruvian farmer for a glacier melt threatening his South American community. And in the Philippines, several oil companies are under investigation by the country's human rights commission for global warming damages. The archipelago was slammed in 2013 with the deadliest typhoon in history.

A 2013 global study found that just 90 companies are responsible for two-thirds of all greenhouse gases produced since the dawn of the industrial revolution, and oil companies were the biggest culprits.

The study found that the top 10 contributors of all "cumulative worldwide emissions of industrial" greenhouse gases between the years 1854 and 2010 were:

Al Gore was encouraged by the U.S. states' efforts announced Tuesday. He said state attorneys general likewise played an "historical victory" in combatting the tobacco issue. But that battle took 40 years of court actions, he warned.

"We do not have 40 years to continue suffering the consequences of the fraud allegedly being committed by the fossil fuel companies where climate change is concerned," the former U.S. vice president said Tuesday.